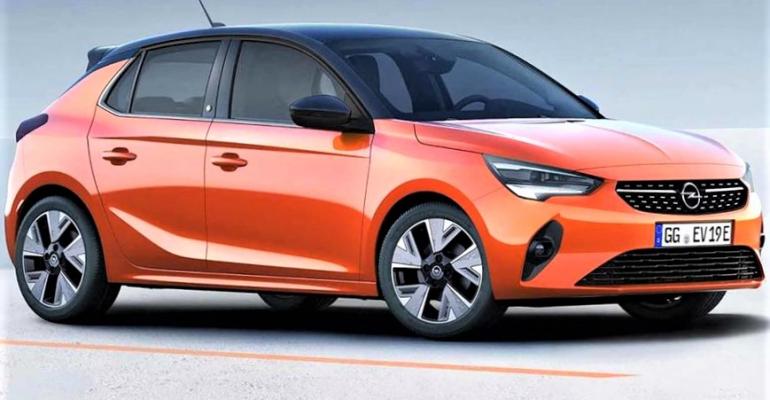 As well as being the first model to be conceived under new owner PSA Group, the 2019-model-year Corsa also provides the basis for the first electric-powered model to be produced by Opel and its sister brand, Vauxhall.

The sixth-generation Opel Corsa has been prematurely revealed in a series of images posted to the internet more than four months before its planned public debut the 2019 Frankfurt auto show.

The images originally were posted to a French website. They were subsequently deleted at the behest of Opel, but not before one internet user later re-posted them on a different website.

As well as being the first model to be conceived under new owner PSA Group, the 2019-model-year Corsa also provides the basis for the first electric-powered model to be produced by Opel and its sister brand, Vauxhall.

The eye-catching orange-colored model featured in the images is the new electric-powered Corsa e, which shares its platform and driveline with the recently unveiled Peugeot e-208. It is expected to feature a 134-hp electric motor and a 50-kWh lithium-ion battery with a range of about 211 miles (340 km).

The new platform is claimed to contribute to a 238-lb. (108-kg) reduction in weight from the outgoing fifth-generation Corsa, according to Opel. It says the new compact hatchback will weigh as little as 2,161 lbs. (981-kg), thanks in part to an 88-lb. (40-kg) saving in the body-in-white alone.

Further weight-saving measures include the adoption of an aluminum hood, significantly lighter seats both front and rear and new engines.

Opel insiders reveal the design of the new model originally was to be evolutionary. However, it was changed following PSA’s purchase of Opel from General Motors in 2017.

Following an industrywide trend in Europe, the new lineup will support just one body style in the form of a 5-door hatchback. The 3-door version of the Corsa is to be discontinued, according to Opel.

Development of the new EMP1-based Opel model has taken little more than two years following PSA’s decision to shelve original plans for the sixth-generation Corsa to be based on GM’s SCCS platform – something that would have required the Franco-German automaker to pay a licensing fee to GM, according to Opel Chairman Michael Lohscheller.

“It’s true that we had a version ready to go, and you can’t just stretch a design to fit a new platform,” he says. “But the teams have done a fantastic job in record time to ensure that the car is on schedule.”

Besides adopting the EMP1 architecture, the new Corsa also uses PSA-developed engines, including a turbocharged 1.2L gasoline 3-cyl. in a variety of outputs.

Inside, the Corsa’s cabin has been thoroughly redesigned. Key features include a digital instrument panel and central touchscreen.

The existing model’s MyLink interface developed by previous parent GM appears to have been dropped in favor of PSA’s more contemporary interface, as found on recent Peugeot, Citroen and DS models.

The new Corsa will be produced at Opel’s Zaragoza plant in Spain.