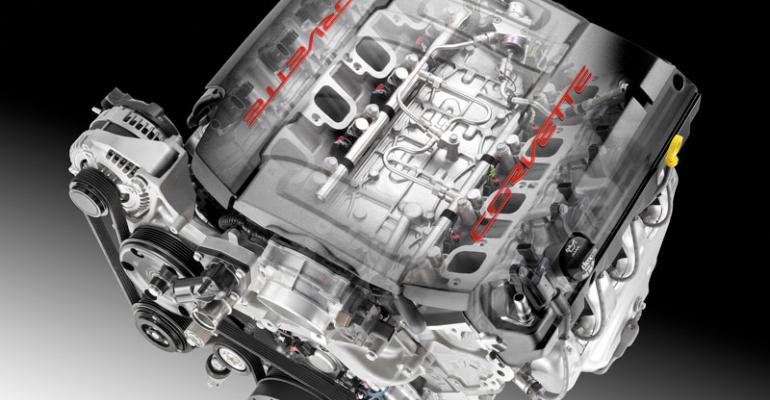 GM&rsquo;s fifth-generation V-8 will spend more time in 4-cyl. mode, use Delphi-supplied GDI, boost efficiency with continuously variable valve timing and no longer will be produced in Romulus, MI.

But the 6.2L LT1 Corvette application will be a tiny fraction of a much larger engine family that will power Chevrolet and GMC pickup trucks, SUVs and other performance cars.

The compact and power-dense small-block engine family, which dates to 1955 and currently ranges in displacement from 4.8L to 7.0L, consistently exceeds 1 million engines annually. Small-block installations through the first half of model-year ’12 were nearly 500,000 units, according to WardsAuto data.

GM is not yet prepared to discuss next-generation truck and SUV small-block engines, but information will circulate in the coming months.

In the meantime, many of the technologies that appear on the new LT1 V-8 are bound to show up on the other gasoline engines, including Delphi-supplied direct fuel injection; cylinder-deactivating Active Fuel Management; and a continuously variable valve timing system that helps the engine breathe better and produce more power, while improving emissions during casual driving.

AFM has been on GM pickups and SUVs since 2005, and more than 8 million vehicles industrywide are on the road with cylinder-deactivation technology today, says Dean Guard, the auto maker’s executive director-North America Engine Programs.

The Corvette has never had cylinder deactivation before, but AFM has boosted Camaro fuel economy some 12%, while trucks and SUVs so equipped have consumed about 8% less fuel.

The new LT1 V-8 will run in 4-cyl. mode more often than the fourth-generation engines, but GM cannot quantify the gain precisely until the engine’s performance is SAE certified in spring, Guard says.

GM intended years ago to integrate AFM in the current sixth-generation Corvette because the car’s lightweight and favorable aerodynamics make it ideal for the technology, says Tadge Juechter, executive chief engineer for the C7.

“But the driveline dynamics in 4-cyl. operation created noise and vibration problems that were insurmountable on the C6,” Juechter tells journalists. “We’ve fixed those problems; we have overcome those challenges on the next-generation car. Cylinder deactivation becomes the most important fuel-saving technology in the car.”

Fuel economy and sports cars do not always go hand-in-hand, but Juechter says he knows Corvette buyers want AFM because the common perception has not caught up with reality.

“The most frequent first comment I get when I meet someone at a Corvette event is, they tell me what kind of mileage they got driving to that event,” he tells WardsAuto. “People love it when they get over 30 mpg (7.8 L/100 km) in their current Corvette.”

Juechter knows a Corvette buyer wants both fuel economy and high performance. “If we take performance away, there’s no reason for them to trade out of their current Corvette,” he says. “We need to give them a reason to trade up.”

GM executives declined to discuss other aspects of the new Corvette at a recent event (a full unveiling comes at the North American International Auto Show in January), but journalists noted the fully dressed LT1 lacked an important bit of hardware: a power-steering pump.

That the Corvette will use electric power steering should come as no surprise because its direct competitor, the Porsche 911, already uses it, as do a growing number of performance cars.

“That’s not a bad speculation,” Juechter tells WardsAuto when asked about EPS. “You can see virtually all new vehicles coming out with EPS.”

Conventional power steering requires a pump hydraulically driven off the engine, and the system is always working even when driving in a straight line. “You can’t have that parasitic loss continually when you’re not even steering and have a 21st century car,” he says.

With EPS, AFM and an emphasis on reduced mass, Juechter vows the new Corvette “will be the most-efficient 450-hp car you can buy,” at least equaling the C6 highway fuel economy of 26 mpg (9 L/100 km).

The new engine, like the LS3 6.2L it replaces in the Corvette, uses an aluminum block and aluminum cylinder heads, and GM declines to say whether all versions of the new small-block will be cast from the lightweight metal. Until now, the high-volume truck and SUV small-blocks have used cast-iron blocks.

Like the previous Corvette engine, the new one will come with standard wet-sump lubrication or an optional high-performance dry-sump system. The new vane-type oil pump is crankshaft-driven, same as on the two previous-generation small blocks.

Standard on all fifth-generation small blocks will be eight oil-spraying jets inside the block to drench the underside of each piston and the surrounding cylinder wall with an extra layer of friction-reducing oil for better cooling. Oil spraying had been used exclusively on the supercharged LS9 and LSA engines in the previous generation.

Although GM has employed gasoline direct injection in 4-cyl. and 6-cyl. engines, this is the first application in a small block and Delphi’s first GDI contract with GM, its former parent. The fueling system includes a high-pressure pump, fuel-rail assembly and electronic control module.

In moderate weather, that will take about 20 seconds, and after that the system will revert to one injection per intake stroke, Lee says.

Guard praises Delphi’s work on the small-block GDI program. “Delphi frankly was a little late getting started on DI, but they came to the party in a big way,” he says. “They’ve done a very nice job on this system.”

The dual-equal cam-phasing system carries over from the previous truck small-block V-8s, but Lee says the new variable-valve-timing system operates with more authority, allowing the cam phaser to retard or advance valve actuation to a greater degree.

By integrating the improved VVT system, along with AFM and GDI, overall fuel efficiency should climb some 20%, Lee says.

The lead plant for Gen5 is Tonawanda, NY, which received a $400 million retooling to manufacture the new engine. A GM facility in Ramos Arizpe, Mexico, also will produce generation five, as will St. Catherines and Wixom.

GM said a year ago the Romulus plant would receive a $385 million investment for a new fuel-efficient engine program that will retain or create 320 jobs. Lee declines to provide details.

But in the meantime, Lee says the Romulus plant “is running flat-out making Gen4 engines while we try to get Tonawanda up and running to make that transition seamlessly.”