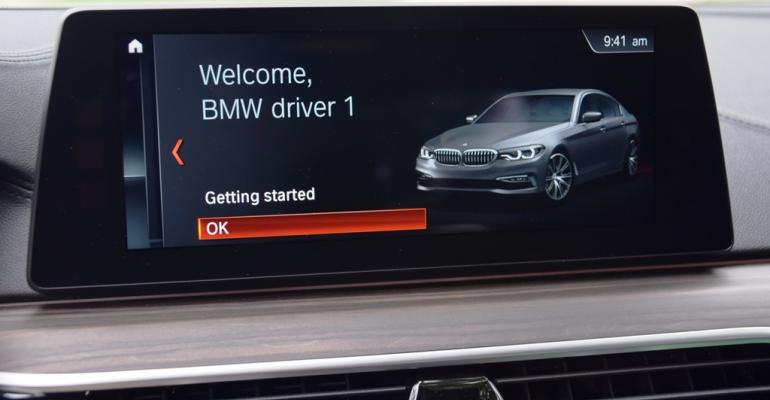 James Bond didn&rsquo;t have massaging seats in his 7-Series 20 years ago, and even he would be blown away by all the gadgets and gizmos that make the new 540i so special.

This is the second in a series profiling each of the 2017 Wards 10 Best UX winners.

As James Bond, Pierce Brosnan in “Tomorrow Never Dies” drove a modified BMW 7-Series that could saw through cable, re-inflate its own tires, launch rockets and be driven flawlessly through a crowded parking deck at high speed with a remote controller by a bemused British spy relying on a camera and crouched in the backseat to avoid a hail of gunfire.

That was 20 years ago, and that was Hollywood.

Today, some of those technologies, and even some that were nothing more than a glint in a future engineer’s eye, can be had on ’17 BMW 540i sedans rolling out of the factory in Dingolfing, Germany, minus the movie studio’s rocket launchers and spinning cable cutters that rose from under the blue and white roundel on the hood.

Gesture control, camera-based collision-avoidance steering and radar-based stop-and-go cruise control allowing the car to accelerate, brake and motor along without the driver ever touching the pedals are merely a few of the seamlessly integrated technologies earning the 540i a spot on the 2017 Wards 10 Best User Experiences list.

Making Ian Fleming proud, the 540i also comes with Remote-Control Parking (a $750 option), allowing owners to exit their car once they find a spot in a parking deck, then use the Display Key to park the car, even in a narrow space.

As impressive as the 540i is, we’ve seen some of this technology before on the BMW 7-Series, which earned a spot on the inaugural Wards 10 Best UX list a year ago.

The well-equipped all-wheel-drive 540i we evaluated this year is not cheap, stickering at $82,360, but that’s a bargain relative to the winning 7-Series, priced nearly $50,000 more.

And here’s where BMW is smart with the launch of the all-new 5-Series. The new smaller sedan actually improves upon or offers updated versions of technology that debuted on the 7 a year ago.

For instance, the 540i’s Active Lane Keeping and Traffic Jam Assistant now offers semi-automated steering for up to 50 seconds of hands-free driving, nearly twice as long as in last year’s 7-Series. And BMW engineers say the system is programmed to operate more smoothly.

WardsAuto judges find that claim to be spot-on, as the new 5-Series is a supremely confident ADAS driver, braking and accelerating gradually as if a relaxed human were behind the wheel.

If the vehicle ahead stops suddenly, the highly intelligent 540i with “Evasion Aid” can change lanes quickly, even if the driver isn’t paying attention, and uses sensors to check for unobstructed space around the vehicle before steering and braking safely to avoid a crash.

Also new for the 5-Series is the ability to set temperature thresholds for seat heating and cooling. If the cabin air temperature reaches a certain point, these functions can be set to come on automatically, without ever touching a button.

BMW Connected has been improved to integrate the user’s digital life (via smartphones, for instance) to improve day-to-day planning of drive routes for appointments, while Remote 3D View lets owners keep an eye on their parked 5-Series’ immediate vicinity with a glance at their smartphones.

There’s more, such as the navigation system that keeps learning a driver’s preferred routes, the multi-color head-up display, the tray for wirelessly charging properly equipped smartphones, the crystal-clear Bowers & Wilkins surround-sound audio system and the front-row seats that adjust 20 ways and can give eight different types of massages.

Bond didn’t have massaging seats in his 7-Series 20 years ago, and even he would be blown away by all the gadgets and gizmos that make the new 540i so special.