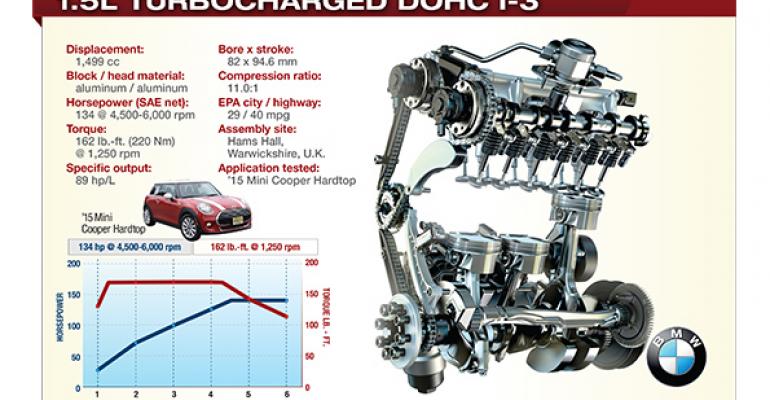 <p><strong>Engine can be installed transversely or longitudinally, driving either front or rear wheels, and can power plug-in hybrid vehicles such as BMW i8.</strong></p>
Vehicles

Ward’s 10 Best Engines competition has recognized outstanding powertrains for 21 years. This installment of the 2015 Behind the 10 Best Engines series looks at the development of BMW’s 1.5L 3-cyl. in the Mini.

Most of us can remember when the handful of 3-cyl. engines on the market were shaky, sluggish, generally sorry attempts at wringing a bit more fuel economy out of cheap subcompact cars. Nobody liked them, and very few bought them when affordable 4-cyl. alternatives were available.

My, how things have changed. Of the 2015 10 Best Engines chosen after exhaustive testing and evaluation by WardsAuto editors, no fewer than two are three-bangers. Ford’s tiny 1.0L turbocharged I-3 made the cut for 2014 and repeats this year. Now Mini’s impressive BMW-designed turbocharged triple joins it on Ward’s 10 Best Engines list for 2015.

“The 1.0L Ford EcoBoost 3-cyl. and the 1.5L Mini 3-cyl....hold their own against bigger engines and are a testament to the dogged pursuit of efficiency, friction reduction and power density,” writes editor Tom Murphy. “How do we separate the winners from the rest of the pack? By paying close attention to real-world fuel economy, throttle response and noise, vibration and harshness.”

WardsAuto editors score each engine on those characteristics in addition to power, torque, technology and relative competitiveness. “Historically, 3-cyl. engines were something you were forced to drive by economic necessity,” says editor Drew Winter. “However, we’re now seeing a new generation of small boosted 3-cyl. mills that still are base engines, but are incredibly powerful for their size, tout lots of advanced technology and are a lot of fun to drive.”

It helps that this one essentially is half of BMW’s award-winning 3.0L turbocharged straight six and, as such, inherits the suite of state-of-the art technologies that make BMW’s latest-generation 4- and 6-cyl. engines (all with common 0.5L cylinder displacements) so deservedly acclaimed. That TwinPower technology package includes turbocharging, direct fuel injection, dual Vanos variable camshaft control on both intake and outlet sides and Valvetronic fully variable valve control.

The engine also is compact and lightweight – ideal for transverse front-drive applications – with its forged steel crankshaft, aluminum block, weight-optimized pistons, vibration-damping countershaft, a map-regulated oil pump and a mechanical coolant pump that also supports the alternator and HVAC compressor. Its turbocharger is integrated into the exhaust manifold for compactness and a short exhaust-gas path, and fuel injectors are positioned centrally between the valves, right next to the spark plugs.

The jurors also were impressed by this new Mini base engine’s performance, its surprising smoothness and even its “resonant growl” during acceleration. “BMW says the sound frequency of a 3-cyl. engine increases 50% faster than that of a 4-cyl., and that gives the engine its sporty, more emotional exhaust note,” Winter says. “Some call it ‘vivacious.’”

This is a major contrast from the non-turbo three-pots of the past, which were as shaky as they were wimpy. How did BMW engineers make the new 1.5L both fairly refined and easy on the ears?

“We are talking about a 3-cyl. high-tech engine developed by BMW,” they say. “[It] is actually half of a 6-cyl. engine, meaning that it has the genes of the 6-cyl. unit. This is reflected in qualities such as smooth running performance, spontaneous responsiveness, high revving and powerful acceleration. Another feature is the sporty sound developed by such a dynamic engine.”

BMW insiders tell us their toughest challenge was besting the 4-cyl. it replaced: “The predecessor engines already offered a great balance between output and fuel economy. So it was tough to improve even more on both fields. Our engineers found the solution by redesigning the whole concept, building up a new engine family with a single-cylinder capacity of 500cc and going for three cylinders where suitable.”

Depending on the specification, vehicle and transmission type, it beats its Mini Cooper predecessor by 5% to 15% in fuel economy yet performs exceptionally well (in combination with an electric motor) in BMW’s widely acclaimed i8 plug-in hybrid sports car: “It is very compact and variable. It can be installed transversely or longitudinally, driving either the front or rear wheels, and can be used to power plug-in hybrid vehicles as well.”

What were the team’s top priorities in designing and developing this new engine? “The balance between efficiency, emission and performance was our main target,” they say. “That was the reason why we developed a new engine. Our top priorities were to increase the output and reduce the fuel consumption significantly. At the same time it was important for us to set up a new modular engine family.

“Thanks to construction commonality within a combustion type, the proportion of shared components has increased to as much as 60%, while design commonality between petrol and diesel engines is about 40%, an insider says. Finally, all 3- and 4-cyl. engines from the new family can be mounted either longitudinally or transversely in BMW and Mini models.”

How difficult was hitting its mass target, and how was that done? BMW has made substantial mass reductions with all members of this new family of engines, engineers say, by increasing their aluminum content and even using some magnesium, and this 3-cyl. engine’s  very compact design contributed to its lightness. “At the same time,” they add, “thermal management and acoustic properties have also been improved.”

Yet they admit there is room for improvement in future generations: “We are proud of the result we have achieved with the new engine family,” they say. “Nevertheless, our engineers always keep on pushing the envelope and are improving technology constantly.”