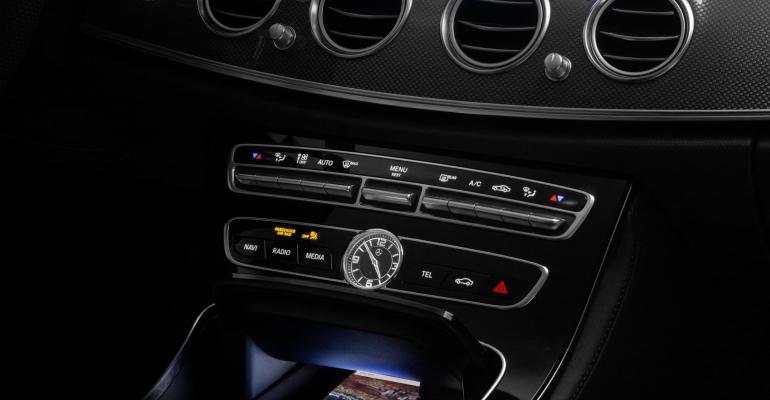 Machine learning inside Mercedes-Benz vehicles observes owner habits, trains itself to recognize those patterns and eventually predict what the driver may want next.

NOVI, MI – Machine learning might sound like the backdrop to a dark science-fiction movie, but Mercedes-Benz believes putting the technology into to its cars and trucks will make the everyday grind go more smoothly.

Machine learning inside Mercedes-Benz vehicles, beginning with the C-Class and S-Class cars before rolling out through the brand’s portfolio, observes owner habits, trains itself to recognize those patterns, preferences and tendencies and eventually predicts what the driver may want next.

Mos, speaking at TU Automotive Detroit 2016, a connected-vehicle conference here, admits the learning does not occur overnight. Nor should it, he says.

“You want to come to a point where you create trust” between the machine and the user, Mos says.

Mos says Mercedes-Benz decided to pursue machine learning because of skyrocketing data-management demands that come with new electronic features. The faster speeds of today’s computers provide the opportunity for the machine to learn, and new tools for understanding data have merged, too, which makes machine learning practical in automotive.

The goals for machine learning at Mercedes-Benz are twofold. First, the flood of new content into luxury vehicles requires additional interaction elements, such as buttons and dials, between the driver and machine. Machine learning would keep those elements to a minimum, simplify driver tasks and improve the overall user experience.

Machine learning also addresses the many varieties on new content entering vehicles. Mos cites music, which in a few short years has gone from an AM/FM receiver with a CD player to include personal-electronic device capability, as well as satellite radio and applications such as Pandora.

“You have tons of ways to get music in the car, and we have to find the interface,” he says. “We have that challenge in all areas.”

Machine learning eventually would know the music preference of the driver, including which sources or styles the person enjoys at a specific time of day by watching usage patterns.

The machine learning is transferrable, too, because people typically own more than one vehicle and utilize additional forms of transportation.

The Mercedes-Benz Companion App, developed with Apple, is one example. It combines Apple wearables, such as watches, with the vehicle. Tell your Apple Watch where you’d like to go and it will direct you to your car, which will take over on-road navigation, and once you arrive at a destination the watch takes over again to deliver you to a front door.

But why build the route every day, Mos asks? Instead, let the app learn your habits and offer choices of where you are likely to go next. Or give it access to your calendar so it can alert you of your next meeting and provide a driving route that takes into consideration real-time traffic volumes.

“That’s just one app,” Mos says. “Where we go next is the question.”

Wherever the automaker goes next, Mos says all personal information will stay protected within the car to ensure safety and privacy. It also will be able to perform all functions without a connection to the cloud, because the car’s computers are powerful enough to run the software.

Mos says Mercedes-Benz released its machine-learning app on iPhone and Apple Watch, but expects to add support for Android phones and Android Wear down the road.