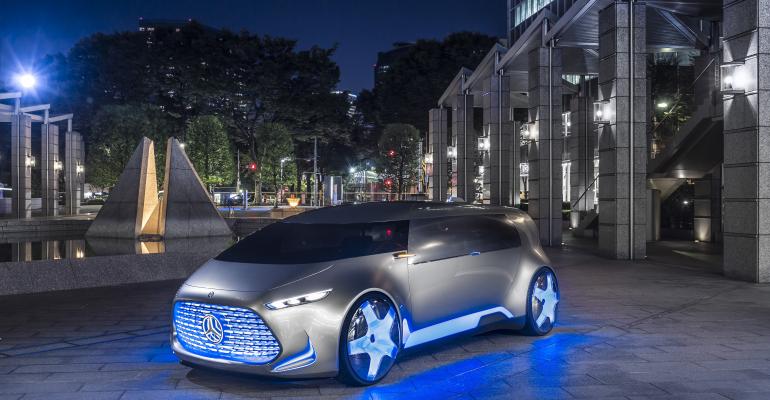 The autonomous-driving Vision Tokyo concept seats five in a living-room-like setting and is powered by a fuel cell.

Called the Vision Tokyo, the rakish multipurpose vehicle was developed in a joint program by Mercedes’ global network of advanced-design studios as a successor to the similarly themed F015 Luxury in Motion unveiled at the Consumer Electronics Show in Las Vegas in January.

The new 5-seat concept is clothed in a smooth 1-box body sporting a large trapezoidal grille, similar to that used by Ford on its current-generation models. The vehicle stretches to 189.1 ins. (4,803 mm) in overall length, a generous 82.7 ins. (2,101 mm) in width and 63.0 ins. (1,600 mm) in height, making it slightly shorter but wider and lower than a standard-wheelbase R-Class.

In a move suggesting the show car could provide solid clues to the way it will advance its future passenger-vehicle lineup, Mercedes says the MPV “marks a new conceptual approach” for the brand.

Eschewing traditional doors, the Vision Tokyo features a large single curbside door. It levers upwards on two sturdy hinges and comes to rest parallel to the roof. At the rear, the taillamps are integrated within the outer edges of an oval-shaped rear window, providing it with a clean and unadorned look.

Picking up on the trend toward lighting customization popular among young Japanese motorists, various sections of the Vision Tokyo’s exterior, including the oversized grille and individual spokes of its large 26-in. wheels, are illuminated in blue – a color Mercedes suggests provides clues to the model’s hydrogen-fueled driveline.

Various sensors and stereo-camera technology required to provide the Vision Tokyo with the ability to drive itself are housed primarily within a fin mounted on the roof.

Indicating its future production cars could evolve during use to meet the needs of the customer, Mercedes provides the Vision Tokyo with deep machine-learning and intelligent predictive engine processes.

“With each journey, it becomes more familiar with its occupants, their likes and preferences,” the automaker says in a statement.

Continuing the theme explored on the F015 Luxury in Motion concept, Mercedes provides the Vision Tokyo with an interior that takes full advantage of autonomous-driving technology by providing a face-to-face cabin environment for its occupants.

Entry is via the upward swinging door on the left-hand side, while conventional seats are eschewed in favor of a semi-circular shaped couch that accommodates up to five adults, who the automaker says would be able to “chill and chat without having to worry about steering a way through the traffic.”

The sides of the cabin are lined in leather and adorned with LED touchscreens. Together with an overhead projector module, they provide an advanced multimedia experience with various displays projected as a 3-dimensional hologram within the interior space.

A seat facing in the direction of travel can be released from the front of the couch should the Vision Tokyo require manual control, allowing the driver to operate the steering wheel, which also can be moved automatically from a standby position into a proper driving position.

Power for Mercedes-Benz’s latest concept hails from an updated version of the hydrogen-fuel- cell electric-hybrid system initially showcased by the F015 Luxury in Motion.

The layout and output of the high-tech driveline remain under wraps, although it is claimed the Vision Tokyo has an overall range of up to 609 miles (980 km) between refueling. That includes a 118-mile (190-km) range from its battery via electricity stored by way of either plug-in or inductive means. The fuel-cell stack provides another 491 miles (790 km) between fill-ups.

The hydrogen used to power the hybrid system is stored in pressurized tanks within the floor of the concept.

The Vision Tokyo is the latest in a series of concept cars revealed by Mercedes in recent years that boast a similar design lineage, including the Vision Ener-G-Force, AMG Vision Gran Turismo, G-Code and F015 Luxury in Motion.