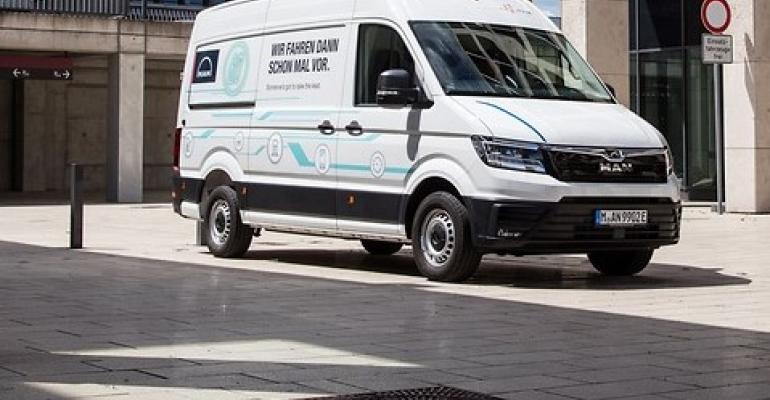 eTGE batteries generate up to 134 hp, range of up to 108 miles.
Technology

The first deliveries for the regional market are forecasted for early 2020 amid high demand for zero-emissions LCVs stemming from tough new clean-air regulations major European cities are enacting.

MADRID – The Iberian (Spain and Portugal) subsidiary of MAN Truck & Bus announces it has begun accepting orders for its eTGE, an all-electric light-commercial vehicle.

The first deliveries for the regional market are forecasted for early 2020 amid high demand for zero-emissions LCVs stemming from tough new clean-air regulations major European cities are enacting. Those rules are designed to curtail the use of vehicles powered by internal-combustion engines in city centers.

Statistics show 70% of LCVs used in urban areas travel on average less than 60 miles (100 km) per day at a low average speed and with many starts and stops. This is the environment in which German commercial-vehicles maker MAN is introducing the eTGE.

Production of the electric version of the TGE range of vans began in July 2018 at MAN facilities in Wrzesnia, Poland.

The eTGE runs on accumulated electricity in its lithium-ion battery packs that powers a three-phase synchronous motor mounted directly on the front axle, assisted by a single-speed gearbox.

The electric van has a theoretical range of up to 108 miles (173 km), according to NEDC standards, a distance MAN engineers say is enough to cover about two-thirds of all urban routes carried out by ICE vehicles.

The eTGE’s batteries can be charged at a 7.2-kW three-phase alternating-current charging point in about 5 1/2 hours or in about 15 hours on single-phase AC, which is the most common in homes.

A quick charge of 45 minutes, which allows the batteries to recover up to 80% of their maximum charge, is possible at a 40-kW direct-current charging station.

Jaime Baquedano, commercial director of trucks and vans at MAN Truck & Bus Spain, insists the extra cost of the eTGE compared to the ICE-powered TGE can be quickly amortized. He adds that EVs do not require certain maintenance tasks such as changing oil and filters, which positively affects the total operating cost.

“And it should not be forgotten that fleets deciding to buy the MAN eTGE can participate in state, regional and local electricity subsidy programs and sign up for zero-emission tenders, thus benefiting from more economic advantages,” Baquedano says.