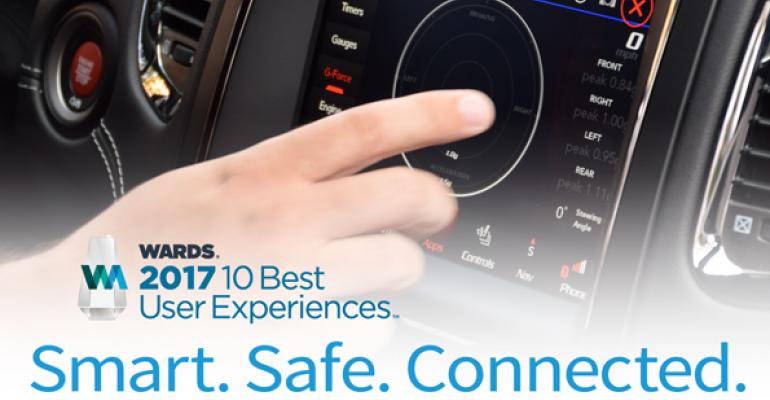 &ldquo;We started this competition one year ago, and in that short time we&rsquo;ve seen tremendous progress on the part of automakers. These are small steps toward the world of autonomous vehicles,&rdquo; says Drew Winter, senior content director at WardsAuto.

Proving that a great “user experience” behind the wheel need not be the sole province of luxury cars, the 2017 Wards 10 Best UX list features a lot of mainstream brands, such as Ford, Dodge, Honda, Mazda, Subaru and Volkswagen.

There are camera-based forward vision systems to help steer a vehicle in its lane, radar-based sensors to prevent collisions and voice-activated technologies to minimize distraction from infotainment systems. All can either delight us with smart design and make our lives easier or cause drivers endless frustration.

“We started this competition one year ago, and in that short time we’ve seen tremendous progress on the part of automakers. These are small steps toward the world of autonomous vehicles, but big leaps in simplifying how drivers and passengers interact with vehicle technologies and features.”

The 2017 Wards 10 Best UX winners, with prices as tested including destination charges:

Granted, some of these well-equipped vehicles are at the upper reaches within their respective model ranges, but many of the connectivity and driver-assistance features that impressed us also are available in less-expensive versions.

The focus of the Wards 10 Best UX competition, which is a microcosm of Wards 10 Best Interiors, is to identify driver interfaces that are user-friendly, navigation systems that are easy to program, collision-avoidance technologies that are dependable and smartphone integration that is simple, allowing drivers safe access to text messages, emails and phone contacts while on the road.

The Audi S5 Sportback is a return winner, of sorts. Last year, the Q7 earned a place on the inaugural list with first-rate graphics, excellent voice controls and a reconfigurable “virtual cockpit” that can fill the entire gauge cluster with a high-definition, full-color map.

Along comes the ’18 S5 in a smaller package that sacrifices nothing and instead enhances the user experience with vivid graphics, a bright head-up display, a larger rotary multi-media dial, faster response to commands, a slick red, silver and white “S5 quattro” greeting at startup and shutdown and, to ratchet up the excitement, carbon-fiber trim on the instrument panel and a 354-hp supercharged V-6.

The UX truly helps sell the Audi S5 and remains a benchmark for autonomous functionality, graphics, user-friendliness and infotainment.

Another exemplary interface we encountered last year in the BMW 7-Series flagship sedan returns to our list this year in the ’17 540i sedan, bargain priced at $82,360, nearly $50,000 less than the 7-Series tested last year.

But the features that bowled us over last year, such as gesture control, a 10.2-in. (26-cm) color display screen and arguably the best voice-activation system in the business, make the user experience inside the BMW 5-Series tough to beat.

This car is dripping with the latest technology, from the now-familiar 6th-generation iDrive controller and cable-free Apple CarPlay to available real-time traffic and weather information and voice-command system that seems to never fail, not to mention driver-assistance features that will reliably pilot the 5-Series down the highway without hands on the wheel or feet on the pedals for a spell. It’ll even park itself.

The ’18 Buick Enclave is part of a trio of large CUVs from General Motors, representing GM’s best effort to date in the area of user experience. Last year, the GMC Acadia (Enclave’s platform mate) earned a spot in the winners’ circle.

But the Enclave is Buick’s first model to get the special luxury treatment as an extension of the Avenir sub-brand, resulting in sleek lines and brushed metallic trim on the instrument panel, enriched by a clean layout and relatively few buttons for audio and climate controls. Below the rear bumper, the tri-shield Buick badge shines on the pavement at night, showing the driver where to kick once to open the liftgate. Absolutely brilliant.

The Enclave does a lot of things really well, integrating an 8-in. (20-cm) reconfigurable instrument cluster that ties together both digital and analog readouts, as well as six USB ports, ensuring no device goes uncharged. Per usual for GM vehicles, smartphone pairing for Bluetooth and Wi-Fi is lightning fast and simple.

Last year, the Chrysler Pacifica, with FCA’s latest-generation Uconnect infotainment system, earned a spot on the inaugural Wards 10 Best UX list, and this year the Dodge Durango SRT gets a nod with an updated higher-resolution version that illustrates the wide flexibility of the Uconnect architecture.

While the colors of the display screen in the Pacifica minivan are soothing and relaxing, the presentation in the 475-hp Hemi-equipped Durango SRT is quite different, with italic font and a deep red backdrop on the screen to carry on the sporty mission of this brute ute.

The vehicle presents a dazzling array of graphical elements, including a smoky SRT animation at startup and shutdown, a slick 3-D navigation map and an equally colorful TFT gauge cluster. An “SRT” button at the base of the center stack triggers a series of “Performance Pages” to help drivers tap this vehicle’s prodigious performance and set the transmission, stability control, suspension, steering and all-wheel-drive systems to their liking.

Want launch control and active Christmas tree lights for a little drag racing? It’s all at your fingertips. But so are adaptive cruise control, other driver-assistance technologies and real-time news, traffic and weather linkups that make the Durango SRT a great daily driver.

Another enthusiast vehicle that makes a lasting impression is the Ford F-150 Raptor, a go-anywhere-do-anything-at-high-speed off-roader that also leverages the latest iteration of the automaker’s excellent Sync 3 connectivity system.

Like the Durango, the F-150 Raptor is a vehicle of many purposes, able to conquer the most treacherous rocky grades, then change gears for a leisurely ride home with adaptive cruise control doing much of the work. Four USB ports – two in front and two in the second row – as well as two 110V plugs ensure plenty of juice for devices.

At startup, a turquoise “Raptor” logo atop a swirling image of the vehicle’s honeycomb grille fills the central display screen, and the familiar “Built Ford Tough” animation appears in the digital gauge cluster to reinforce the Raptor’s F-150 lineage.

WardsAuto judges find many reasons to love the Raptor, from the fast response to voice commands and big knobs befitting a big truck to the easy-to-use navigation system and assertive and reliable lane-keeping assistant. As one editor says, the building blocks for an autonomous or semi-autonomous pickup truck and off-road vehicle are here.

The Honda Odyssey has been a worthy contender in the minivan sector for years, and now the fifth-generation version has arrived with enough family-friendly features to lure away shoppers who were considering a utility vehicle instead.

Where do we start? With the Blu-Ray/DVD rear entertainment system with wireless headphones, the Magic Slide second-row seats, the wireless phone charger, the handy HondaVAC to vacuum up spills, the hands-free power liftgate, the competent driver-assistance features or the 11-speaker premium audio system that can create a playlist from songs on every person’s smartphone in the vehicle?

Families on the go know an SUV or CUV can’t match the minivan’s airy and open floorplan and sliding-door flexibility. The 7-passenger Odyssey carries forward those attributes with a stylishly arrayed command center with vehicle and climate controls, a push-button transmission, an easy-to-navigate touchscreen and all-important volume knob.

Let’s not overlook the Voice of God “Cabin Talk” microphone letting the driver speak to little ones in the second and third rows or the “Cabin Watch” video camera to see what they’re up to.

Ford was the only automaker with two 10 Best UX winners this year, the F-150 Raptor and the all-new Lincoln Continental, a new flagship sedan that promises good things from the luxury brand.

Similar to FCA’s Uconnect system, Ford successfully tweaks its intelligent Sync 3 connectivity architecture in the winning F-150 Raptor (and lots of other Ford vehicles) to provide the brainpower of an advanced infotainment system in the Continental that, based on the switchgear, type fonts and generously proportioned display screens, presents itself as something completely new and groundbreaking from Dearborn.

The Continental won a 2017 Wards 10 Best Interiors trophy for its lavish and supple cabin, 30-way adjustable massaging seats and astonishing 19-speaker Revel Ultima sound system. Those factors play a part in the user experience, but the Continental’s core interface with the driver is top-notch for its processing speed, driver-assistance features, voice controls and brightly colored, reconfigurable head-up display.

We like a little sizzle in our UX evaluations, and the Continental delivers it with a startup sequence that has the word “Continental” materializing from what appears to be a meteor shower.

Mazda has been on quite a roll, having won five Wards 10 Best Interiors honors since 2012 and a Wards 10 Best Engines prize this year. The latest addition to its corporate trophy case is for the all-new Mazda CX-5, a Wards 10 Best UX winner.

The CX-5 excels in its interaction with the driver. Whether it’s by voice, steering-wheel controls, buttons on the instrument panel or the brushed-metallic dial within easy reach in the center console, the CX-5 driver has multiple ways to make things happen without a lick of frustration.

Also appreciated is the color head-up display that projects a stop sign in case the driver missed it, even on unmapped private property.

Besides the Lincoln Continental, the Subaru Impreza is the only other vehicle this year winning both 10 Best Interiors and 10 Best UX honors. But the Impreza, with its all-new StarLink infotainment system, makes the cut for a whole lot less money: out the door for under $30,000 in Limited trim.

Despite its bargain pricing, the Impreza is one of the few vehicles with a voice-control system sophisticated enough to adjust cabin temperature and fan speed without ever touching a button.

Volkswagen’s first 3-row CUV, the Atlas, impresses the WardsAuto judges with a navigation system that is easy to program and driver-assistance features that brake smoothly and steer confidently.

Phone pairing is quick, and the first-rate touchscreen is simple to navigate. To keep the display uncluttered, certain virtual buttons appear only when a hand reaches toward it, thanks to capacitive sensing.

VW admits its previous utility vehicles didn’t quite hit the mark with the U.S. market, so the new Atlas delivers the user-experience attributes Americans demand, such as a clean gauge cluster, four USB ports, a 110V socket and plenty of cubby space for gadgets and devices, and the starting price of $30,500 is most compelling.

America loves the functionality of utility vehicles, and a well-proportioned 3-row crossover has become vital to success in the U.S. market. These vehicles may not be sporty or dramatically styled, but the Atlas proves they can be remarkable.

Winner profiles will appear on WardsAuto.com beginning Sept. 21, and honored automakers will receive their trophies on Oct. 5 during the WardsAuto User Experience Conference at the Suburban Collection Showplace in Novi, MI.