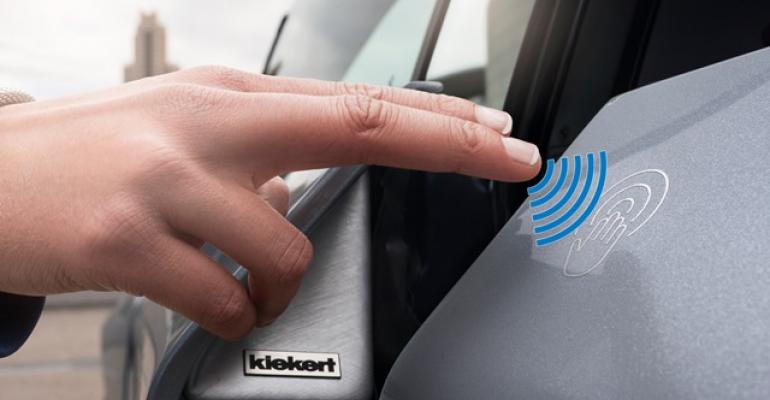 The supplier&rsquo;s latest iteration of the e-release latch is a first step toward autonomy. NuEntry-Latch eliminates the need for exterior door handles, which reduces weight and locking system complexity.

The list of parts and components automakers and their supply chain must rethink in preparation for autonomous cars seemingly grows by the day and now there’s another: doors that open and close automatically with an eye on obstacles.

Rarely seen by drivers but a critical safety and security technology, as well as more recently a comfort and convenience item, door latches must evolve to allow access to a driverless car when it shows up at a person’s doorstep for a ride or to drop off a package.

The change soon to be ushered in by autonomy will be historic. Electronic-release latches, for example, have been on the market for a number of years, perhaps most notably in the Chevrolet Corvette sports coupe. The challenge of the future will be safely and cost-effectively executing the same concept for a mass-market product such as driverless cars.

Kiekert’s latest iteration of the e-release latch is a first step toward autonomy. NuEntry-Latch eliminates the need for exterior door handles, which reduces weight and locking system complexity. The e-release system also opens up new options in exterior design and includes a redundant mechanical system for backup, even when the power is out.

“As a volume product, it could provide a lot of advantages in mass, because you’re getting rid of parts you do not need,” says Mike Hietbrink, general manager and global sales director-Kiekert USA.

Latch systems also must be able to do some thinking on their own in certain circumstances, such as a crowded parking lot, where today’s drivers already make the mistake of swinging the door open too far and banging into an adjacent car. There also is the scenario today where a driver may be wrestling something out of the rear seat, such as a package or a child from their car seat, and accidentally bumps their door into a neighboring vehicle.

Doors of autonomous cars additionally must sense approaching objects, such as another car, a pedestrian or cyclist.

Latch systems of the future must be lighter to save weight for fuel economy, which means moving to electrical rather than mechanical actuation as some luxury cars have recently, but still lock and unlock with absolute reliability and sound pleasant to the ear while doing so.

Kiekert’s i-Protect prototype automatically detects dynamic objects and electromechanically applies a brake to the door opening, if required, with accuracy down to 0.39 ins. (1 cm). Costly scratches and door dings will be a thing of the past, Kiekert says, and the environment around the car will be much safer.

The range of braking for the door is infinite, too, so it could stop at any point if it detects a stationary or moving object.

“And if you have kids of an age where they can open the door on their own, there’s another instance where i-Protect may save them from dinging another car,” says Hector Verde, director-product development of the Americas at Kiekert.

Using i-Protect as a baseline, automakers could add on modules to create i-Move, which Kiekert characterizes as an intelligent movement system for comfortable, automatic opening and closing of the door with the press of a button.

Heiligenhaus, Germany-based supplier Kiekert, the global leader in automotive side-door latches, has been conducting R&D around latch and locking systems of the future for autonomous vehicles, as well as electric vehicles, hydrogen-fuel-cell vehicles and traditional cars and trucks.

The approaching sea change is nothing new, Hietbrink says. The latch industry in two short decades has witnessed the advent of 1-piece integrated locks and actuators; stricter safety regulations around corrosion; and heightened automaker durability requirements.

The 160-year-old Kiekert is not without competitors in the latch industry, and the business opportunities presented to it by autonomous cars likely will bring about new rivals. But with more than 2,000 latch patents, a 450-person strong engineering unit, a presence in every major market and sales to every major OEM, Kiekert is uniquely positioned and highly focused, Hietbrink says.

“We do latches,” he says. “We spend our time developing the latest technology in that realm. If we were not on the cutting edge technically, we would be in trouble.”