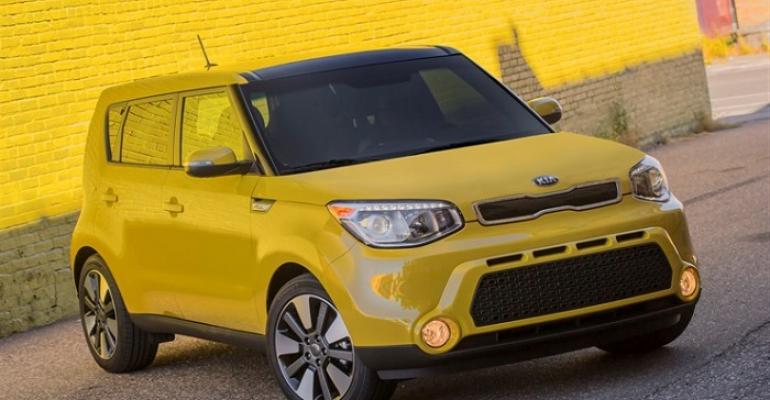 Korean brands Kia and Hyundai take the No.2 and No.4 spots in the 2015 J.D. Power Initial Quality Study, besting all Japanese brands, which collectively fell below the industry average for the first time.

“For so long, Japanese brands have been viewed by many as the gold standard in vehicle quality,” Renee Stephens, vice president-U.S. automotive quality for J.D. Power, says in a statement. “While the Japanese automakers continue to make improvements, we’re seeing other brands, most notably the Korean makes, really accelerating the rate of improvement.”

Germany’s Porsche leads the IQS for the third year in a row, with a score of 80 problems per 100 vehicles.

General Motors’ Chevrolet is the highest-ranking domestic brand, with a score of 101 pp 100, followed by Ford’s Lincoln with 103. Both brands improve their scores from last year.

Lexus and Toyota brands, often in the top five in the IQS, tie for ninth place with GM’s Buick, each scoring 104 pp 100.

The industry average in this year’s IQS, a measure of problems reported during the first 90 days of vehicle ownership, is 112, up 3% from 116 in the 2014 study.

Ford, Ram, Honda and Mercedes are other brands ranking above the industry average.

Fiat was in last place in the 2014 IQS as well, but as somewhat of a consolation improved its score sharply, from 206 pp 100 vehicles last year to 161 this year.

Audi, Cadillac, GMC and Volvo had placed above the industry average last year.

The Detroit brands also had 114 pp 100 vehicles, equaling the Japanese for only the second time in the 29-year history of the study.

Stephens says this year’s leading brands not only stepped up the pace of improvements to existing models, but also launched new vehicles with higher quality and more intuitive designs. The latter is noteworthy, because for the third consecutive year consumers responding to the survey report the most problems with voice recognition and Bluetooth pairing.

J.D. Power says voice-recognition systems can account for 10 or more problems per 100 vehicles.

The research firm also doles out model and plant awards as part of the IQS.

The Chevy Malibu took top honors as the least problem-prone midsize car, edging out the Kia Optima and Toyota Camry.

Other winners include the Nissan Sentra as top compact car, the BMW 5-Series as the top-ranking midsize premium car and the Ford Super Duty as the top large heavy-duty pickup.

BMW’s Rosslyn, South Africa, plant took the platinum award as the best-performing assembly plant in the world. J.D. Power says there were just 15 problems per 100 units of the 3-Series built there.

By region, Toyota’s Cambridge North plant in Cambridge, ON, Canada, home to the Corolla compact car, took gold honors in North and South America with a 17 pp 100 score.

In the Asia-Pacific, Kia’s Kwangju Plant 1 in South Korea won gold, with a 17 pp 100 score for the Soul model.

After the Rosslyn, South Africa, plant, BMW’s Dingolfing No.1 plant in Germany was the next-best in the Europe and Africa region, with 21 problems per 100 units of the 3-, 4- and 5-Series models produced there.