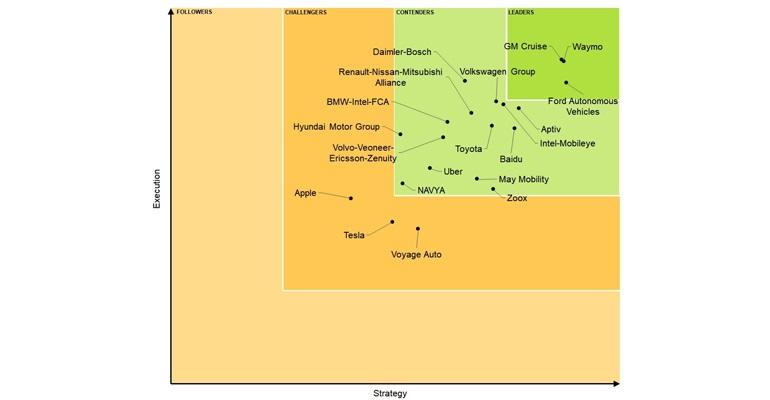 A year-ago, the research firm listed eight companies or consortiums as top-tier leaders in automated driving, but now says GM Cruise, Waymo and Ford Autonomous have moved ahead.

And then there were three.

Remaining among the leaders from a year ago are General Motors, Waymo and Ford, though Navigant now refers to GM Cruise and Ford Autonomous to reflect the formation of those specific business units within the two Detroit automakers.

The research firm says Waymo and GM Cruise are neck and neck in the race to secure autonomous-vehicle leadership, with scores of 86.7 and 86.6 points, respectively. Navigant awards points to each company based on 10 factors: vision; go-to-market strategy; partners; production strategy; technology; sales, marketing and distribution; product capability; product quality and reliability; product portfolio; and staying power.

In naming Waymo an ever-so-slight No.1, Navigant cites the company’s addition of new partners and rapid accumulation of real-world test miles as evidence of a maturing business model. Navigant says GM Cruise has solidified its management structure and secured the partnerships and investment necessary to get through the initial deployment phase and begin generating revenue.

Falling behind the leadership pace and to “contenders” status are Daimler-Bosch, Volkswagen Group, BMW-Intel-FCA, Renault-Nissan-Mitsubishi and Aptiv. Also in the second-tier ranking are Hyundai Group, Toyota, Volvo-Veoneer-Ericsson-Zenuity, Baidu, Uber, NAVYA, May Mobility, Zoox and Intel-Mobileye.

Of that group May Mobility and Zoox are included in the study for the first time and Uber, considered a challenger a year ago, has moved up a level.

Among those rated as contenders, Aptiv is ranked the highest, followed by Intel-Mobileye, Volkswagen, Daimler-Bosch and Baidu.

Challengers include Apple, Tesla and Palo Alto, CA-based startup Voyage Auto, a first-timer on the list that has built test fleets using Ford Fusions and, more recently, Chrysler Pacifica Hybrids. Voyage also may have the opportunity to provide first-mile/last-mile delivery services, aggregating packages from companies such as FedEx or UPS, Navigant says.

Not rated separately this time around is Honda, considered a challenger a year ago but now invested in GM Cruise, with plans to rely on that operation for its AV technology. PSA Group and Jaguar Land Rover, labeled contenders a year ago, also are not included in the latest roundup.