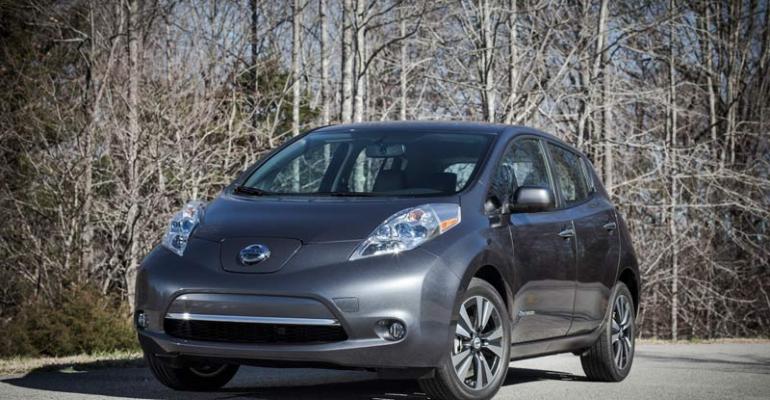 Following Toyota&rsquo;s strategy of bringing technical improvements to market as soon as they are ready, Nissan cut 175 lbs. from the first-generation Leaf by redesigning the electric powertrain and modifying the battery&rsquo;s structure.

TOKYO – Plug-in hybrid electric-vehicle technology is the “most realistic medium-term” option for auto makers from a cost and performance standpoint, says Shigeki Suzuki, a senior managing officer at Toyota, speaking at a recent conference here.

Takeshi Miyamoto, an engineering director with Nissan’s EV technology-development division, says recent upgrades to the Leaf all-electric car have contributed to a 14% increase in driving range.

Following Toyota’s first-generation Prius strategy of bringing technical improvements to market as soon as they are ready, Nissan cut 175 lbs. (80 kg) from the first-generation model that weighed 3,345 lbs. (1,520 kg). This was achieved by redesigning the Leaf’s electric powertrain and modifying the battery’s structure.

The Leaf’s lithium-ion battery retains its basic structure comprising 48 modules, each with four 1.9V cells for a total of 192 cells. However, components have been lightened and modules and case structure streamlined, contributing to a weight reduction of 44 lb. (20 kg). Total voltage and energy are 360 volts and 24 kWh, unchanged.

At last year’s Battery Expo in Japan, a senior Nissan research executive told WardsAuto the Li-ion battery pack for the Leaf would come down to ¥50/watt-hour ($0.52/watt-hour) in fiscal 2013.

Other new Leaf features include a heat-pump cabin heater that substantially reduces energy consumption when the heater is engaged. Nissan declines to provide details about energy savings. However, a supplier source claims the new system, which replaces the previous model’s electric heater, cuts energy consumption in half.

Nissan also has slashed the amount of the rare-earth element dysprosium in the Leaf’s electric motor magnets 40%. Dysprosium is added to neodymium-based magnets to increase heat resistance, the auto maker says.

In the microhybrid segment, mainly comprising stop/start systems, Mazda says its new ‘i-ELOOP’ device featured on the Mazda6 contributes up to 10% fuel savings when used with the auto maker’s “idle/start” system.

The system eventually will be adopted for B-through-C/D segment cars, which range from the Mazda2 up through the CX-5 cross/utility vehicle and Mazda6 sedan. “The advantage of the system,” according to Takahashi, “is instantaneous recharging.”

Demand for Li-Ion Batteries to Grow in Volume, Value

Munehisa Ikoma, Panasonic’s vice president and chief technical officer, predicts the market for Li-ion batteries for all applications will grow to 28 GWh hours of energy in fiscal 2015, up from 23 GWh in fiscal 2012. The automotive segment, according to the company’s forecast, will increase from 3 GWh to 15 GWh during the period.

In the lead-acid battery segment, the executive predicts demand for eco-friendly systems such as stop/start will grow fourfold over the next three years to ¥181 billion ($1.9 billion). 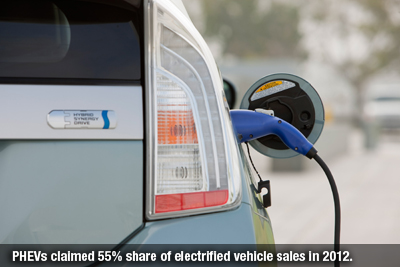 Industry observers have varying views of the auto battery industry. Ali Izadi, an analyst with Bloomberg New Energy Finance says global EV and PHEV sales more than doubled in 2012, to 114,600 units. PHEVs, led by the Volt EREV and plug-in Prius, claimed a 55% share.

However, he warns, the industry is experiencing significant excess capacity in Li-ion battery production for automotive applications and this situation will continue for several more years.

Global production capacity grew to 28 GWh in 2012, he says. Counting new capacity in the pipeline, Izadi predicts the supply-demand imbalance will swell to 30 GWh in 2014, with capacity increasing to 36 GWh against 6 GWh of demand.

Li-ion passed nickel-metal hydride in 2012 as the primary EV/hybrid battery, claiming a 58% share of demand that totaled 3.6 GWh. Of the lithium total, 0.65 GWh and 1.35 GWh were installed in plug-in hybrids and EVs, respectively.

Nickel-metal-hydride claimed an estimated 95% of conventional hybrid vehicle demand. The remainder, limited to models such as the Honda Civic and Hyundai Sonata hybrids, was lithium.

Tetsuya Osaka, longtime industry-watcher currently employed at Waseda University in the School of Advanced Engineering, claims Japan is losing ground in the Li-ion market, with share falling to 35% in 2011 from 94% in the previous 10 years. During the period, South Korean producers have seen their market share grow to 39.5%.

Zhou says sales of next-generation vehicles in the Chinese market, mostly to fleet users, totaled a mere 24,700 units in 2012. By type, these included 13,300 EVs, 10,400 conventional hybrids and 1,000 PHEVs. He admits the market still hasn't accepted the segment.