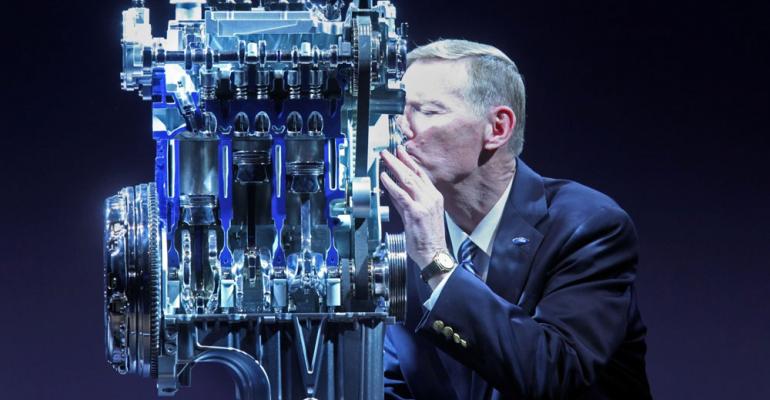 The automotive engineering community agrees almost unanimously the ICE someday will be phased out in favor of electrified vehicles, but its continued evolution promises it will be a fun ride to the bitter end. &nbsp;

To hear some talk, one might think the internal-combustion engine is the buggy whip of the 21st century, ready to fade into obscurity as more modern alternatives take over.

But rather than withering away, a new generation of fun-to-drive engines is debuting on the automotive scene with unheard of fuel economy and performance. More are on the way. Tiny new powerplants with motorcycle-size displacements are capable of powering the family cross/utility vehicle, and new V-8s can deliver 25 mpg (9.4 L/100 km) on the highway and still beat a 5-mpg (47 L/100 km) 1960s muscle car on the drag strip.

Every flavor of engine seems to be getting better, not older.

With global regulations for fuel economy and carbon-dioxide emissions forcing auto makers to invest in new technology, the suppliers that make the key components and materials for powertrains say the best days of the ICE most certainly still are ahead.

“It’s a great time to be a powertrain engineer for sure, because a lot of technologies that have been in development for a long time now are taking off, says Dave Genise, director of engineering-valvetrain at Eaton.

He sees technologies such as hollowed-out engine valves, which are well-established in racing and performance-car engines, migrating to mainstream high-volume engines. Hollowed intake valves are lighter and can react quicker to various inputs, improving fuel efficiency. Hollowed exhaust valves are filled with sodium to absorb heat and improve efficiency by speeding the exit of exhaust gases.

“I know Americans like to say there is no replacement for displacement, but that is not really true,” says Gian Maria Olivetti, chief technology officer at supplier Federal-Mogul.

“With turbocharging, downsizing and downspeeding, you can reach a level of performance that is really quite similar to big V-8 displacement.”

Engineers say developing a powerful engine that delivers the fuel economy of a subcompact and performs flawlessly for 150,000 miles (241,000 km) hardly is simple, but it is easier than producing an affordable car battery capable of storing the energy equivalent of 18 gallons (68 L) of gasoline. Current EV batteries have capacity for the equivalent of two or three gallons (7.6-11 L) and progress is slow.

The key to the ICE’s continued dominance is the fact it still has vast unlocked potential for improvement.

A typical ICE only uses about one-third the energy in a gallon of gasoline to turn a vehicle’s wheels; the rest is wasted through friction or slips unused out the tailpipe, says Gary Rogers, president of engineering consultancy FEV and an advisor on numerous U.S. government panels related to fuel economy and the environment.

With so much room for progress and so many new technologies ready for implementation, engineering more efficiency into piston engines promises steady improvements for the foreseeable future.

“Two thirds of the energy in the fuel we don’t use for moving the car. We need to work on as many ways as we can to get efficiency up to 40% or 50%,” Rogers says. “Efficiency will never reach 100%. Even fuel cells are not 100%, but that gives you an idea of what we’re trying to do. We’re going to work like crazy to recover those losses.”

More power will be squeezed out of every drop of fuel by making engines smaller with fewer cylinders and enhancing combustion with forced induction, direct injection and advanced valvetrain strategies. As cylinder pressures and temperatures increase, suppliers say future gasoline engines will borrow materials and components from diesels, such as heavy-duty steel pistons and extra-strong block materials.

A good example of where the industry is headed is Ford’s 1.0L 3-cyl. EcoBoost engine. Featuring both turbocharging and direct injection, it is about one-third the displacement of a typical U.S. engine, with half as many cylinders, yet it makes an impressive 123 hp and 148 lb.-ft. (200 Nm) of torque in European trim. The small engine already has received rave reviews in Europe.

WardsAuto editors were impressed when we recently tested a Euro-spec Focus equipped with the 1.0L on U.S. roads. We averaged a fuel-sipping 39 mpg (6 L/100 km) yet still found the engine engaging and fun to drive. It has a nice, throaty exhaust note as well.

But engineers say downsizing, boosting and direct injection are just the first items in a long list of improvements coming.Next will be materials and design changes required by soaring combustion pressures and temperatures.

“Right now, the existing materials we are using for passenger-car pistons are pretty much at the limit, so it requires that we develop materials that can carry higher loads. That definitely is something we are working on,” says Wolfgang Rein, senior vice president-engineering and product development for engine components, Mahle Industries. “It could be in the direction of aluminum materials, but steel also is being looked at for certain applications.”

Steel pistons can be almost as light as traditional aluminum versions if they are designed with thinner walls and shorter heights, he says.

Federal-Mogul’s Olivetti agrees. “There will be an evolution of the gasoline piston to become more similar to a diesel piston but with more sophisticated technology to keep it significantly lighter.”

Future engine blocks and main bearings also will have to be much stronger as pistons move up and down with greater force, leading to materials up to now only used in diesel and race-car engines.

SinterCast, producer of a super-strong type of cast iron known as compacted graphite iron that is used in heavy-duty trucks and luxury-car diesel engines, recently announced its first high-volume order for a gasoline engine block.

As power grows and cylinder pressures rise, the increasingly ferocious downward pressure of pistons during their power strokes can crack engine blocks and main bearings if they are not robust enough, he says.

While CGI is heavier than aluminum, engineers still can design stronger, lighter-weight engines with the material because its higher strength enables cylinder walls and load-bearing areas to be thinner, Dawson says. Audi’s 3.0L diesel made from CGI is 33 lbs. (15 kg) lighter than Mercedes-Benz’s comparable 3.0L diesel because the Audi engine is 4.9 ins. (125 mm) shorter.

Slice 5 ins. off any engine, including the length of the crankshaft, camshafts and other heavy parts, and a shorter engine can be much lighter, he says.

Even though temperatures and pressures will be significantly higher, there nevertheless will be more plastics on the ICE of the future to lower weight, consolidate parts and cut costs, says Chris Murphy, DuPont Automotive global market development director.

Some 20 years ago, plastic intake manifolds and valve covers were considered cutting-edge. Now they are ubiquitous. The same acceptance curve likely will occur with plastic oil pans and other new plastic applications, even exhaust-system parts such as mufflers, says Murphy.

So what will a typical mainstream gasoline automotive ICE look like 10 to 15 years from now? Interviews with scores of supplier and auto maker engineers suggest it will combine the features of today’s small gasoline engines with those of heavy-duty diesels.

It will employ overhead cams and feature multiple turbochargers, superchargers or both, with 4-valves per cylinder. The valves likely will be hollow and more highly engineered than today but not made of titanium or other ultra-exotic materials for cost reasons.

Higher operating temperatures will require the use of new lubricants and additional coolant and oil galleries to control heat in pistons, exhaust manifolds and elsewhere. Advanced coatings and bearings will substantially reduce friction from current levels.

Intake and exhaust valves will have elaborate controls to more precisely control combustion, but they still probably will be mechanically actuated because of cost.

For years, the auto industry has used or experimented with various types of valve actuation, from camless electromagnetic systems to electric motors (which BMW uses now) and hydraulics such as Fiat’s MulitiAir system. Suppliers say the simplest, lowest-cost strategies are most likely to be the high-volume systems of tomorrow.

Homogenous-charge compression ignition, long the Holy Grail of powertrain engineers, probably won’t be used on a wide scale in the foreseeable future, suppliers say. HCCI combines the best features of diesel and gasoline combustion in one highly efficient, low-emissions package.

But Federal-Mogul’s Olivetti echoes the comments of many when he points out achieving HCCI requires not only sophisticated engine controls that have yet to be perfected, but also ultra-clean fuel, which is not expected to be available in many vehicle markets even 10 or 15 years from now.

Future engines will be based on global architectures designed to be adaptable to mature premium-fuel markets as well as emerging markets with poor quality fuel, Olivetti says. It is difficult to design a mainstream engine that would be flexible enough to incorporate HCCI for one market and still be cost efficient and durable enough for emerging markets with poor quality fuel.

However, most powertrain experts agree some engines will be capable of operating in HCCI mode at least some of the time.

FEV’s Rogers says HCCI still has great potential if used in applications where an engine runs at a more constant speed, such as a range-extender in a plug-in gas-electric vehicle.

The automotive engineering community agrees almost unanimously the ICE will someday be phased out in favor of electrified vehicles. But the ICE’s continued evolution promises it will be a fun ride to the bitter end.