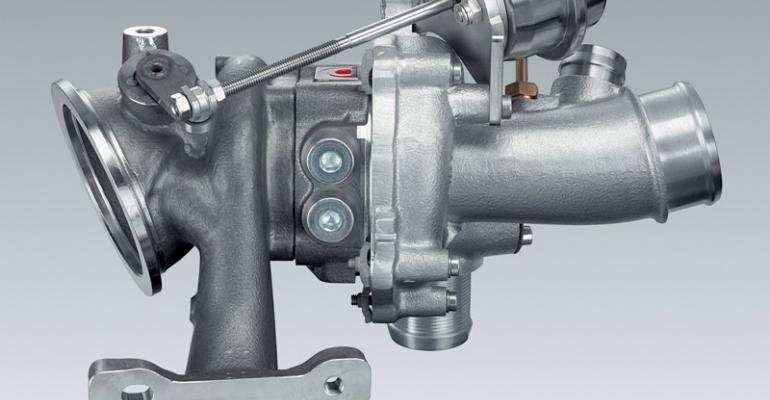 The supplier&rsquo;s first major turbocharger application is on Ford&rsquo;s new 3 cyl. 1.0L EcoBoost engine used in the European version of the Ford Focus. It comes to the U.S. in 2014.

DETROIT – Hybrid and battery electric vehicles are getting all the headlines, but powertrain supplier Continental is finding revenue and profits now in technologies that improve the power and efficiency of conventional internal-combustion engines.

Jose Avila, head of Continental’s global powertrain division, tells reporters here he sees electrification technologies as a “long-term investment” the supplier will pursue steadily but not at the expense of more immediate technologies related to IC engines.

One of Continental’s most recent successes is its venture into the turbocharger market, which currently is dominated by a handful of suppliers, most notably BorgWarner and Honeywell.

Fuel economy and emissions regulations are driving a dramatic global shift in powertrain strategies, creating soaring demand for turbochargers. Auto makers all over the world are downsizing engines to improve efficiency. Adding turbochargers boosts power and allows smaller engines to produce similar or better performance compared with their larger-displacement predecessors.

Continental’s first major turbocharger application is on Ford’s new 1.0L 3-cyl EcoBoost engine used in the European version of the Ford Focus. The engine will be offered on several other upcoming models. It comes to the U.S. in 2014.

Despite the engine’s tiny displacement, the direct-injection EcoBoost delivers 123 hp and 148-lb.-ft (200 Nm) of torque and has received good reviews from automotive journalists for its power, smoothness and efficiency.

A WardsAuto test drive of the new European Focus finds it delivers Ford’s promised 56 mpg (4.2 L/100 km) on the highway.

Avila says several more applications for the turbo are pending, but he declines to give further details.

Kregg Wiggins, head of Continental’s NAFTA powertrain operations, says the supplier believes it has unique design and manufacturing advantages that will lead to more turbocharger business.

Continental specifically is targeting upcoming gasoline engines because the rapid movement to boosting presents the most opportunities, Avila says. Most diesels already are equipped with turbochargers.

But Continental’s significant investment in turbocharging does not mean it is ignoring electrification technologies. Despite some long-term forecasts now predicting fuel prices will remain low for the foreseeable future because of a slowing global economy, Avila does not see auto maker programs for HEVs and BEVs being cut back, nor does he see European or U.S. government regulators moderating future emissions rules.

Avila also points out there are many near-term opportunities for Continental to supply electrification technologies in high volumes related to mild-hybrid and stop/start systems, as well as electrifying IC engine accessories such as water pumps.