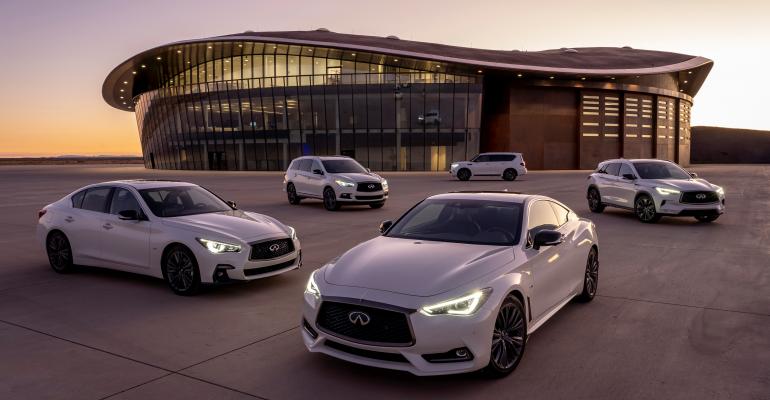 Nissan’s luxury brand celebrates its 30th anniversary with plans for the future.

TRUTH OR CONSEQUENCES, NM – At a space-age spot deep in the New Mexico desert near here, Nissan’s luxury brand Infiniti shows plans for a to-come extended-range electric-propulsion system that aims to give consumers EV driving dynamics minus the range anxiety.

“It has the silence and quickness of an EV,” Eric Rigaux, Infiniti’s general manager-product strategy and planning, says of the new system.

It needs no plug-in charging and is expected to attract buyers who might balk at buying a full EV at this point in automotive-electrification technology's development. Infiniti calls it “bridging the gap” as the industry positions for an anticipated blastoff of EV sales, whenever that may be.

Although fed by a gasoline engine, two electric motors “100% move the the wheels," Rigaux says.

Infiniti also gives journalists a no-photos-please peek at a prototype QX55, an all-new midsize CUV the automaker plans to officially unveil next year.

Featuring a sloping coupe-like silhouette, it takes its design cues from the FX CUV, which Infiniti internals originally dubbed “the Bionic Cheetah” because of its speed and sleekness. It ranks as an industry-first performance CUV back when that segment was known for anything but.

The media preview is at the Spaceport America, the world’s first purpose-built facility of its kind for vertical and horizontal aircraft takeoffs. Located in nowhereville on 18,000 acres (7,300 ha), it includes an architecturally futuristic terminal/hangar and a 12,000-ft.-long (3,657-m) runway. 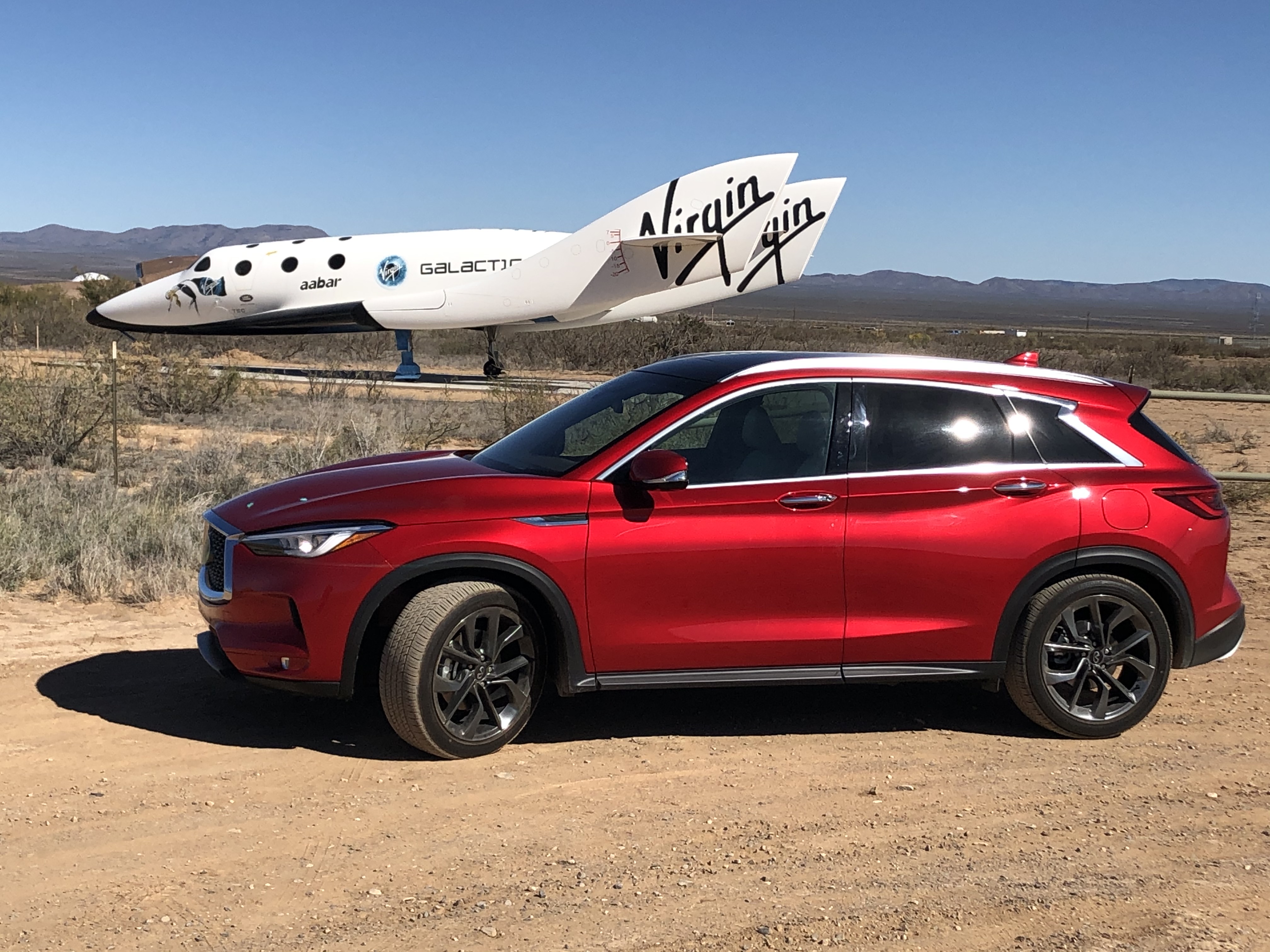 The special occasion for Infiniti all but taking over the space place (temporarily converting the runway and adjacent surfaces into driving courses to put product through the paces, from drag racing to hot laps) is the Japanese brand's 30th anniversary.

While giving that historical milestone its due, Infiniti's event seems more future-focused. A brand mantra here is a pledge to roll out five new vehicles in three years, keeping the pipeline flowing with fresh product.

The upcoming extended-range EVs will serve as a new propulsion blueprint for many of those impending models.

With the system, propulsion is delivered to all wheels through two high-output electric motors. Power comes directly from a high-discharge, low-capacity battery pack, which is recharged constantly by a 1.5L 3-cyl. gasoline generator based on Infiniti’s VC-Turbo variable compression-ratio technology.

Power is provided directly to the two high-output electric motors – one on each axle – by a battery pack located beneath the floor of the cabin, varying in capacity from 3.5 to 5.1 kWh depending on model.

The character of the power delivery resembles that of a high-performance battery-electric vehicle, Rigaux says.

That includes quietness and instant acceleration. The motors deliver a total power output of between 185 and 320 kW (248 hp to 429 hp), depending on the vehicle.

“Most of the time the engine is running, you won’t hear it,” Rigaux says, noting it’s encapsulated to enhance quietness.

The system eliminates plug-in charging needs, he notes. Plug-in hybrid-electric vehicles have been around for a while and are touted as an antidote to driver range anxiety, but they failed to catch on much in the marketplace, with only fractional take rates.

“Our new gas-generated EV powertrain represents the next step into our electrified future, acting as a bridge to full electrification and setting the tone for our upcoming zero- and ultra-low-emission cars,” Rigaux says.

In the next two years, almost every future Infiniti model will offer alternative choices of the gasoline-generated and all-electric propulsion systems.

One adaptable platform will accommodate different electrified propulsion systems that Infiniti will offer. The automaker says the platform is flexible enough for a range of models. Many of them will reflect innovative styling because EV configurations allow designers more creativity.

Nissan, Infiniti’s parent company, has sold the Leaf hatchback since 2010. It was one of the first modern-day EVs put on the market. Its sales have been modest: 14,715 units last year, although that's a 31% increase from 2017.

Meanwhile, the QX55 hand-built prototype shown to journalists here (and to dealers the day before) features a sloping roofline and other curvature design elements that counterpoint the traditional 2-box design of early CUVs. (QX55 teaser photo, left)

It shares the same platform as the QX50, Infiniti's current midsize CUV,  but is designed more daringly. The QX55 is billed as Infiniti’s first of those five new vehicles planned for the next three years.

It  will compete in a huge segment with buyers of varying tastes, ranging from utilitarian to sporty. “One type of vehicle doesn’t fit them all,” Franklin says.