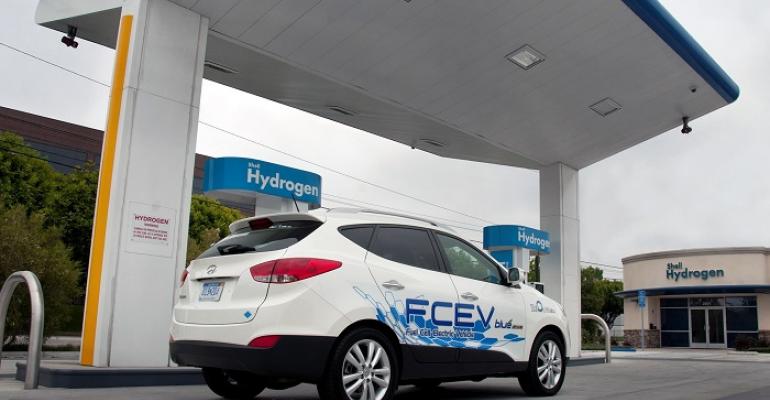 The U.S. arm of the South Korean automaker expects roughly 40 refueling stations to be open by the end of the year in California, up from 11 currently.

It’s no secret the road to getting fuel-cell vehicles on the road has been rocky.

Hyundai, which led all automakers in the current phase of FCEV rollouts when it launched the Tucson FCEV nearly two years ago in Southern California, knows that well.

“We’ve been the pioneer, (but) there have been growing pains,” Hyundai Motor America CEO Dave Zuchowski tells WardsAuto in an interview.

Hyundai does not release monthly sales figures for the Tucson FCEV, but an HMA spokesman says U.S. deliveries since the CUV’s June 2014 debut number 93.

That’s not a huge amount, even in the alternative-powertrain world where even some of the lower-volume battery-electric vehicles delivered at least 1,000 units last year.

Hyundai wanted to build 1,000 Tucson FCEVs for global markets by 2015, but has leased or sold fewer than 500 worldwide. The vehicle also is available in South Korea and Europe, where it is known as the ix35.

Not helping U.S. sales has been a shaky hydrogen-refueling infrastructure in California. While the state is the leader in hydrogen infrastructure in the U.S., that’s a relative stature. There are fewer than a dozen retail stations open, according to the California Fuel Cell Partnership’s station map: seven in the counties of Los Angeles and Orange, one in Fresno County and three in the San Francisco region.

As Zuchowski notes, when Hyundai launched sales of the Tucson, seven hydrogen stations were open, but they weren’t reliable.

“Some of the original stations were never for commercial (use). They weren’t up on a stable basis,” he says, noting refueling stations in the Southern California cities of Irvine and Newport Beach have had downtime. That led to reports of frustrated Tucson FCEV owners unable to drive their vehicles, which lease for $499 month.

Not helping matters was the introduction of the Toyota Mirai into the market last October, which further stressed an already taxed infrastructure with more consumers needing to refuel, Zuchowski notes.

Like Toyota has done with its Mirai fuel-cell sedan, Hyundai has had to halt deliveries of the Tucson FCEV momentarily due to insufficient refueling infrastructure.

A Hyundai spokesman says Tucson FCEV deliveries were stopped in October and November to ensure the volume of drivers did not exceed infrastructure capabilities. Deliveries resumed in December.

Zuchowski says it should be smoother sailing ahead for Hyundai and other automakers trying to get FCEVs established as a viable alternative to internal-combustion-engine vehicles and other alternative-powertrain variants such as plug-in hybrids and EVs.

“I think for the most part we’re through with the worst of the infrastructure issues,” he says.

Zuchowski expects roughly 40 stations to be open by year’s end in California. The CFCP’s map shows 30 retail stations are in the permitting process, with some expected to open soon, such as a station near San Diego slated for a Feb. 28 startup.

Hyundai still is leasing the Tucson solely in Southern California, but it is formulating plans to begin sales in the northern part of the state, the spokesman says.

Bringing hydrogen fuel-cell vehicles to market always has been a chicken-and-egg issue, and it continues to be one.

A sticking point also has been the cost of infrastructure. While a hydrogen-refueling station had been pegged at $1 million, “it’s running closer to about $1.5 million,” Zuchowski says.

He also notes disinterest from oil producers in being involved, although that wasn’t always the case.

More than a decade ago, Hyundai partnered with Chevron and UTC Fuels to construct six hydrogen refueling stations. The first opened at Hyundai’s Chino, CA, technical center in 2005, but it’s unclear if the remaining five were constructed.

Three years ago, Hydrogen Frontier, with a $3 million grant from the California Energy Commission, was to update the Chino station for public use, raising pump pressures for quicker refueling and adding the ability for the station to derive hydrogen from electrolysis of water on-site. The updated station was set to open in October 2014, but the CFCP map shows it remains in development.

“Our point has been, we’ll build the cars, but we need someone to help us with the infrastructure,” Zuchowski says.

Hyundai has no current deals to co-fund infrastructure development, says the HMA spokesman.