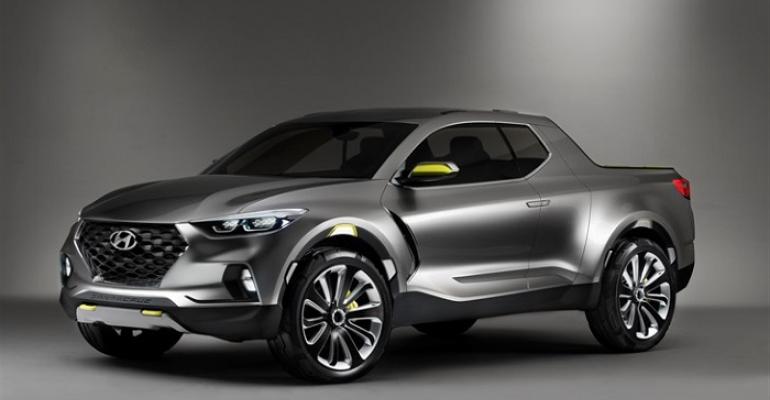 After more research than Hyundai says it ever has done on a concept, the Santa Cruz boasts some unique features, namely an extendable tailgate.

DETROIT – Pulling off a rare surprise at the 2015 North American International Auto Show, Hyundai yanks the sheets off a crossover truck concept, the Santa Cruz.

“The entire purpose of us being here this week is to gauge consumer interest, media interest, and if it does what we think it’s going to do, get it accelerated into our product plan as quickly as we can,” Hyundai CEO Dave Zuchowski tells media here following the concept’s unveiling.

Based on the new Tucson CUV platform, the Santa Cruz is seen as a small pickup that can recapture the interest of younger buyers. Today, Hyundai notes fewer and fewer of them are buying compact pickups, calling them “almost nonexistent” in the segment as the compacts have become larger and pricier.

After more research than Hyundai says it ever has done on a concept, the Santa Cruz boasts some unique features, namely an extendable tailgate that when fully out creates a bed length similar to that of midsize pickups in the market.

The concept also is seen as having fuel economy in the high 30-mpg (7.8-L/100 km) range, and features all-wheel drive. A 2.0L turbodiesel is the engine in the concept.

“The research was resounding,” Zuchowski says. “There’s a niche out there, not really a small niche, that’s not being met. And we think this type of vehicle has a real opportunity.”

He notes while other automakers have tried this segment in the past (Honda Ridgeline, Subaru Baja), they never found the right balance. Hyundai has with this concept, he says, noting: “We’re not trying to be like a truck. You’re not going to get ground clearance out of this, or towing capacity.”

Hyundai will take the Santa Cruz to multiple U.S. auto shows this year to gauge media and consumer interest. If feedback is positive, the automaker could accelerate its normal 4-year product launch timing to 3 years for a Santa Cruz production model, Zuchowski says.

Hyundai wants to grow its sales and share in the light-truck market in the U.S. The U.S. CEO notes the brand’s 2014 sales, despite topping 725,000 for the first time, weren’t all they could have been because of an over-reliance on cars in a U.S. market trending toward trucks.

As the Santa Cruz project was Hyundai Motor America-led, the automaker hasn’t fully explored other markets that could sell the vehicle. Zuchowski believes Hyundai “would need global markets to make sense of this.”