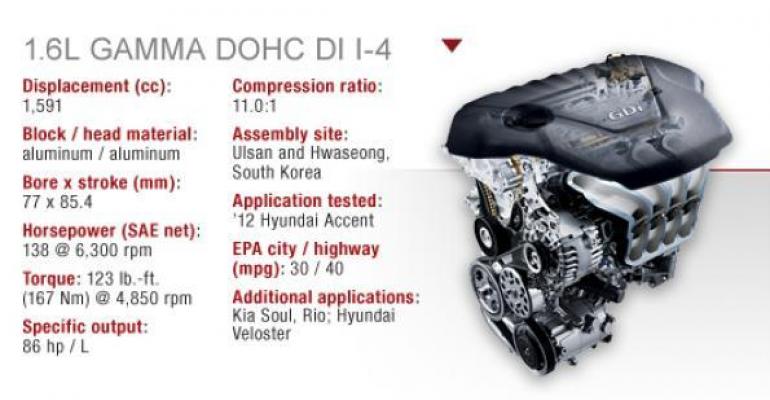 Hyundai&rsquo;s latest-generation Gamma engine is among the smallest in the U.S. and powers the Accent subcompact, one of the lowest-priced cars in the U.S., yet it pushes the envelope in technology and specific output.

The Ward’s 10 Best Engines competition has recognized outstanding powertrain development for 18 years. In this first installment of the 2012 series, WardAuto looks at the development of the 1.6L GDI 4-cyl. in the Hyundai Accent subcompact.

With a portfolio that includes the highly lauded Sonata and Elantra as well as the Genesis and Equus luxury sedans, it is hard to believe Hyundai once was viewed as a producer of cheap, low-quality cars.

Despite its success in moving steadily up market and honing a reputation for quality, the auto maker now is doubling down in the entry-level segment, creating a lineup of small cars and cross/utility vehicles that are sophisticated and technology intensive, yet still feature entry-level pricing.

This focus is epitomized by Hyundai’s latest-generation Gamma engine. At 1.6L, the I-4 is among the smallest in North America. It powers the Accent subcompact and Kia Rio platform mate, among the lowest-priced cars in the U.S., yet it pushes the envelope in technology and specific output, pumping out 138 hp and 123 lb.-ft. (167 Nm) of torque. For a small, economy-car engine, it is quite the overachiever.

We were impressed with the Gamma’s precise and lively throttle and the air of sophistication it lends to the Accent. “It’s an entry-level engine with a lot of integrity,” says WardsAuto editor Steve Finlay.

And, while we were not successful reaching the fuel efficiency levels touted by auto makers on the stickers of most of our test vehicles, we came close with the Accent. One judge approached the highway figure in combined city/highway driving, observing 38.5 mpg (6.1 L/100 km) during his commute, just shy of the 40 mpg (5.9 L/100 km) highway figure Hyundai advertises.

The upcoming turbocharged version also promises to trounce competitors in power and fuel economy. More on this later.

Most significant is the incorporation of gasoline direct injection, a pricey technology that helps boost horsepower 11% and torque 6% compared with the previous-generation multiport-injected Gamma. It also enables the new Accent to get 40 mpg on the highway, leapfrogging fuel-economy leaders such as the Nissan Versa, Ford Fiesta and Toyota Yaris.

Some auto makers believe GDI is an advanced technology that needs to be phased in slowly, but Hyundai is aggressively adding it to all its new engines.

“Market and customer-driven needs will determine whether GDI or MPI (conventional multiport fuel injection) is best suited for specific needs, but basically we have a plan to use GDI technology all over the world. It depends on the country fuel quality,” Park says.

To consumers, fuel economy and performance are the most important powertrain characteristics and GDI is the most promising means of delivering those features, Park says.

Even so, he acknowledges that adding GDI to engines in very price-sensitive segments is no easy task. Hyundai powertrain engineers took a multipath approach to reduce the overall system cost of the engine in order to afford the new technology, Park says. That included optimizing combustion and injection strategies to reduce cold-start emissions and speed up catalyst warming times.

By doing this, engineers reduced catalytic converter and emissions control system expenditures enough to help offset the cost of GDI.

But GDI is not the only innovative bit of technology on this mighty mite. It also has a long list of other technical features not usually found in subcompacts, including dual continuously variable valve timing, electronic throttle control, a roller timing chain and several types of sophisticated anti-friction coatings on moving parts such as valvetrain tappets and piston rings. A new alternator pulley decoupler also helps reduce friction.

Using CVVT on both camshafts (intake and exhaust camshaft phaser) instead of one improves performance and volumetric efficiency as well as enhancing fuel economy and reducing hydrocarbon emissions.

Hyundai plans to produce 630,000 Gamma engines worldwide in 2012 and has capacity to build 800,000 units annually. It currently is used on two platforms and for six vehicles, including the Kia Rio and Soul in addition to the Hyundai Accent, Elantra and Veloster.

This summer, the Veloster will be available with the new turbocharged GDI version of the Gamma, which promises to seriously challenge everything in the segment, including two other excellent small-displacement turbos, the 181-hp 1.6L turbo Prince engine in the Mini Cooper S and the 200-hp 2.0L turbo in the Volkswagen GTI.

Key features of the turbo Gamma are an advanced-design twin-scroll-type turbocharger and a waste-gate that uses a motor-driven electrical controller instead of being mechanically controlled.

The stainless steel exhaust manifold and twin-scroll turbine housing is cast in a unique one-piece design that Hyundai says dramatically reduces weight and cost and improves the durability of the turbine housing.

The motor-driven electric waste-gate allows more precise control of boost pressure. Back pressure is reduced when turbo boost is not necessary by opening the waste-gate, which improves fuel efficiency, Hyundai says. The waste-gate also remains open during cold starts, which results in faster catalyst light-off for reduced emissions.

As for the future, Hyundai’s Park declines to offer specific examples, but he says the Gamma is a young engine family and there are many promising technologies that can be added down the road to further improve fuel efficiency and performance. He also says the auto maker is exploring the possibility of using the turbocharged Gamma in larger vehicles such as the Sonata to further increase the car’s mileage, but nothing has been decided.