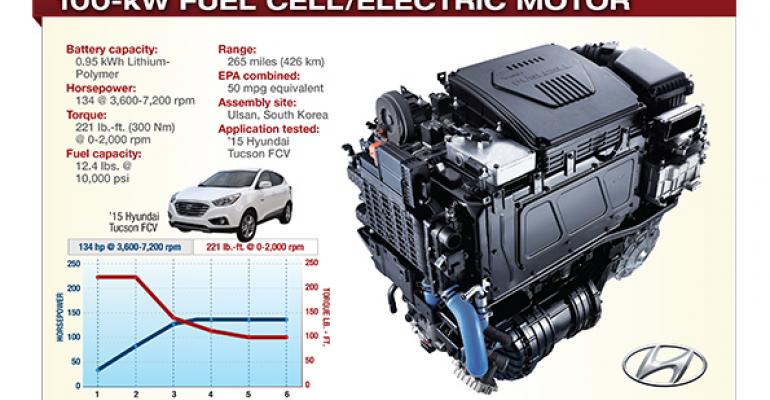 Ward’s 10 Best Engines competition has recognized outstanding powertrains for 21 years. This installment of the 2015 Behind the 10 Best Engines series looks at the development of Hyundai’s ground-breaking fuel-cell powertrain.

Like modern-day alchemists, automakers have been trying to turn oxygen and hydrogen into electricity for decades. They have poured billions into the development of hydrogen-powered fuel cells for zero-emissions vehicles ranging from buses to family sedans.

The goal always has been to avoid the drawbacks of battery-electric vehicles: short range, long recharging times and too much weight and cost. Progress has been slow.

The lack of a hydrogen refueling infrastructure is one reason, but the technology itself has presented many hurdles. Packaging, cold weather and cost have been problems. Worst of all, fuel cells have driven and sounded like science-fair projects with lots of odd noises in the background. They were fun to drive for about 10 minutes until the novelty wore off.

The ’15 Hyundai Tucson Fuel Cell arrives with none of this baggage. It is a delight to drive and wonderfully quiet, even for an electric car. And it delivers on the fuel-cell promise, offering 265 miles (426 km) on one tank of hydrogen stored at 10,000 psi (700 bar). Refueling takes minutes.

Fuel cells have always been a chicken-and-egg proposition between vehicle technology and fueling infrastructure. The Hyundai Tucson Fuel Cell proves that vehicle technology now is ready for prime time. It is the first truly commercial FCV to be offered, but others from Toyota, Honda and General Motors are coming.

A 36-month lease costs $499 a month in California, with $3,000 down. Fuel is free. Federal tax credits for FCVs expired at the end of 2014, but the Tucson FCV still qualifies for state zero-emissions vehicle incentives and perks, including coveted high-occupancy lane privileges, perhaps the most important incentive of all in gridlocked California.

Hyundai also recently chopped the price of the FCV in South Korea. A price cut for versions sold in Europe is expected to be announced at the Geneva auto show in March.

The Tucson FCV’s sticker was reduced from $144,000 to $77,000 in Hyundai’s home market. Including government subsidies, the new lowered price to consumers should be about $54,000.

Aside from the slightly raised load floor in the rear cargo area that sits above the main hydrogen tank, there are few hints the car is powered by the most advanced propulsion system on the road today.

WardsAuto editors were shocked at how refined and consumer-friendly the vehicle is overall, with almost every score sheet featuring comments on the silky NVH. It also did not suffer big range losses due to cold weather like our BEV test cars.

However, Hyundai Vice Chairman Woong Chul Yang says it was a long road getting to where the company is today.

The South Korean automaker started development work in 1998, working with a fuel-cell stack supplier. Around 2004, it decided to engineer its own stack, ultimately going through four generations to arrive at the current design, which fits neatly in the standard Tucson’s engine compartment.

Like other automakers, Hyundai also experimented with various fuel storage strategies, including metal hydrides (porous blocks of metal) and using an onboard reformer, a process that turns gasoline into hydrogen with a miniature chemical plant under the hood.

However, early on Hyundai engineers settled on the idea of storing gaseous hydrogen onboard in high-pressure tanks as the most practical method. Picking this strategy, which now has become an industry standard, allowed Hyundai to be first to market with a truly scalable powertrain capable of being mass-produced.

“We were kind of a late starter but we finished first. Mercedes-Benz, Toyota, Ford, GM and Honda have a long (development) history. Just 16 years (for Hyundai) seems long, but it’s very short for fuel-cell development,” Yang tells WardsAuto after accepting a 2015 Ward’s 10 Best Engines trophy for the Hyundai Tucson FCV.

Hyundai plans to put the powertrain in more vehicles but declines to give details. A fuel-cell- powered bus already is available in South Korea. When the country hosts the Winter Olympics in 2018, Hyundai wants to provide all fuel-cell-powered vehicles for transportation related to the event, including buses.

Fuel cells are much more scalable than BEV powertrains, Yang says, and they continue to get smaller and more efficient with each new generation. As production volumes go up, the cost of the systems can go down dramatically. “It’s easier to squeeze out more range and bring down costs than with BEVs,” Yang says.

We asked him how Hyundai managed to eliminate the annoying fan and compressor noises typical of FCVs, and he says it’s how air is managed when it is pumped into the fuel-cell stack.

“We use a little lower pressure than the other companies,” he says. Putting more pressure on the supply air entering the fuel-cell stack would increase efficiency, but it also creates noise and other issues, he says. So Hyundai engineers chose to sacrifice some efficiency in order to improve NVH and other aspects of operation.

One of the biggest development challenges was organizational, Yang says. Not surprisingly, many inside the company questioned the money and resources being spent on fuel cells over the years. It was difficult to gain consensus in middle management, and he is proud Hyundai’s top management never wavered in its support. “We were very fortunate,” he says.

“Nobody had ever titled any of these vehicles in the hand of an owner. All the fuel cells you’ve seen in the past were owned by big car companies with their license and registration,” he says.

Hyundai spent months explaining hydrogen fuel systems to insurance companies who were understandably concerned about safety. Now customers can insure a fuel-cell-powered car like any other.

“There is no reason to have a concern with hydrogen. It disperses in milliseconds; it goes up (instead of puddling like heavier-than-air gasoline vapors). In most every way it is safer than gasoline. But it’s different and new and people worry,” O’Brien says.

Hyundai leased 54 FCVs in 2014. It expects to expand that number to hundreds and then thousands as hydrogen refueling is expanded in California and the Northeast. New York alone is expected to add 100 H2 stations by 2020.

“Where there’s infrastructure there will be cars. We get letters and emails every day from customers who want the fuel-cell vehicle all around the U.S., but we can only sell the cars where they can get the fuel. We’ve been working very hard with the Northeastern states to find a quicker solution to that,” O’Brien says.

Toyota has the same mindset. Bob Carter, senior vice president-Automotive Operations for Toyota Motor Sales U.S.A., says he has asked for a “substantial” increase in supplies of its Mirai FCV after 16,000 potential U.S. buyers expressed interest in the 4-seater, which debuts late this year. “We really haven’t done any marketing, (so) that’s a lot of activity,” he says. When it announced the Mirai, Toyota said it would collaborate with Air Liquide of France on 12 hydrogen stations for Connecticut, Massachusetts, New Jersey, New York and Rhode Island.

Tightening rules regarding zero-emissions vehicles and credits for automakers in California and 17 other states are driving this activity. California wants 1.4 million ZEVs and PHEVs on its roads by 2025, and its regulations will compel automakers to put a large share of FCVs in the mix.