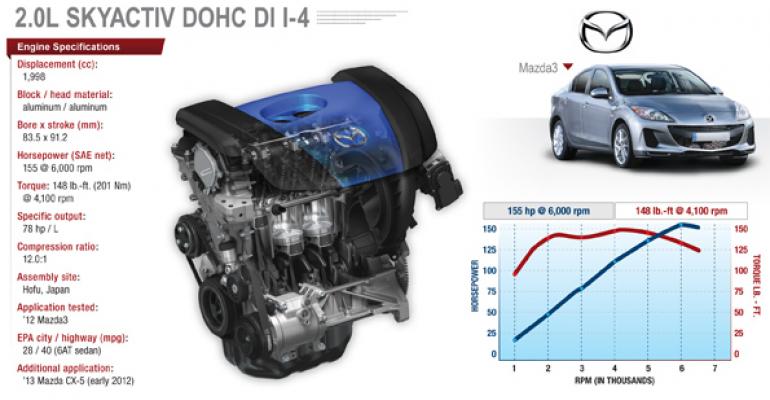 The combustion research that led to Mazda&rsquo;s 13:1 compression ratio on 87-octane gas goes back about 10 years, long before there was a Skyactiv program.

The Ward’s 10 Best Engines competition has recognized outstanding powertrain achievement for 18 years. In this installment of the 2012 Behind the 10 Best Engines series, WardsAuto looks at the development of Mazda’s inventive approach to boosting fuel economy.

Mazda is taking a very different approach to meeting government and consumer demands for increasing fuel efficiency, and it appears to be paying off, at least in the short run.

Instead of betting billions on hybrid- and battery-electric vehicles, Mazda’s strategy, called "Skyactiv,"  is a comprehensive effort to substantially increase the efficiency of every element of every vehicle, beginning with engines and transmissions and continuing through bodies and chassis.

“Our goal is to improve fuel economy globally by 30%,” says Mazda Product Planning Executive Officer Kiyoshi Fujiwara at Skyactiv's U.S. press introduction. “And our answer is still the ICE (internal combustion engine). Our top priority is to radically improve this technology.”

These technologies eventually will give way to vehicle electrification strategies to meet aggressive U.S. corporate average fuel economy requirements on the horizon.

The key is putting off the latter until those technologies are further developed and more affordable.

“The ICE still has substantial losses,” Mazda Powertrain Development Manager Ritaro Isobe says. “We needed to reduce them further. Our vision was ideal combustion, and we have applied technology innovation to achieve that."

Isobe calls Mazda’s (global) 14:1 compression ratio for the engine “groundbreaking” even though it is a lower 13:1 in the U.S. version of the ’13 CX-5 compact cross/utility vehicle, and an even more modest 12:1 in WardsAuto’s ’12 Mazda3 test car.

The compression ratio is lower in the CX-5 so it can accommodate 87-octane regular gas in the U.S. and even lower in the Mazda3 because the car lacks the engine bay room needed to accommodate the full Skyactiv engine's unique 4-2-1 exhaust manifold, a strategic element of the “breakthrough” marriage of technologies that Mazda engineers are using to prevent pre-ignition knock at such high compression.

Compared with the competing Ford Focus and Hyundai Elantra I-4s, "The Mazda3 stands taller...with a free-revving vigor directly attributable to its best-in-class torque peak of 148 lb.-ft. (201 Nm) at a reasonable 4,100 rpm. That extra oomph is noticeable when pulling away from stop lights and passing on the highway,” WardsAuto editor Tom Murphy says.

Equipped with the new Skyactiv 6-speed automatic transmission, the Mazda3 sedan is rated by the Environmental Protection Agency at 28/40 mpg (8.4-5.9 L/100 km) city/highway.

"The combustion research that led to our ability to get to a 13:1 compression ratio on 87-octane gas goes back about 10 years, long before there was a Skyactiv program, with real fundamental research into the combustion process and how we could improve it," says Mazda North America Vehicle Evaluation Manager Dave Coleman. "Some manufacturing innovations also played a big part in getting it off the ground."

The concept is obvious, Coleman says. Higher expansion ratios capture more combustion energy, a fundamental engine characteristic. “The breakthrough was ignoring what we have learned over the last hundred years as to what compression ratios are possible and studying more deeply exactly what we can do using the latest technology available to us," Coleman says.

The enablers that led to such high compression ratios were a “complicated web of things," Coleman says. "The basics of how to avoid knock haven't changed. The main thing that causes knock is high temperature, and higher compression ratios increase temperatures, so you want the intake charge as cool as possible. If we can lower the temperature of the fresh-air charge enough, we can raise compression a calculable amount."

Racing engines for many years have used as much valve overlap as possible to push the exhaust out of each cylinder before pulling in a fresh, cool air charge. Since residual exhaust gas is very hot, even a small amount will dramatically increase the temperature in the cylinder. So Mazda makes clever use of its VVT to enable more aggressive cam timing profiles to fully purge hot exhaust gases.

Another key is the long 4-2-1 exhaust manifold, which allows Mazda to get all the exhaust out of each cylinder without a pressure pulse from another interfering and pushing it back in. But the long exhaust manifold also moves the catalyst farther away, making it hard to light off quickly to reduce emissions during startup.

"The direct injection is helping with that tremendously," Coleman says. "It inherently improves our ability to get a high compression ratio because the fuel atomization is so fine that we get much better cooling effect from spraying the fuel directly into the combustion chamber."

Mazda uses direct injection to very carefully tailor combustion conditions at cold start to get essentially a stratified charge that is easy to ignite. The rich mixture adjacent to the spark plug gets started, and the ball of burning fuel ignites the lean mixture, Coleman says.

That stratified charge is possible thanks to very fast DI that can inject a little fuel during the intake stroke, then a bit more during the compression stroke, to enable very stable combustion, which in turn allows very delayed ignition timing during cold start.

“The later we ignite the fuel, the later it continues burning and the hotter it is going out the exhaust. So we're running very retarded ignition timing during the first 15 seconds or so to create more heat to light off that catalyst and get it up to temperature," Coleman says.

One other contributor to the engine's efficiency is that it cruises open-throttle at light loads. "It actually runs with the throttle open almost like an Atkinson cycle," Coleman says. “Other companies are doing this as well, but we're more picky about the details. We call it the Mazda Miller Cycle, because the Miller Cycle is our method of obtaining an Atkinson Cycle."

Eventually there will be some type of convergence between diesel and gasoline engines, with the ultimate goal to bring homogeneous charge compression ignition into the equation. “That is everyone's Holy Grail,” Coleman says.

"I think some of what we've learned in this process will get us to that stage, sooner rather than later. You'll notice that the compression ratios of our diesel and gas engines in premium-fuel countries are the same at 14:1 now. That is somewhat coincidental, but both of these engines have been driving toward that point, getting more similar."

Of course, every auto maker is working on both powertrain and full-vehicle efficiency from roof to tire patch.

But Mazda is betting its major competitors’ enormous investments in EVs, HEVs, fuel cells and other advanced technologies may limit their near-term investments in ICEs, transmissions, bodies and chassis enough that key competitive advantages can be gained and CAFE requirements met with much-improved conventional powertrains. At least for the next few years, until Mazda also will have to electrify to meet CAFE standards.

What's to prevent others from copying what Mazda has done? The auto maker says it has about 150 patents on every detail of what makes its Skyactiv engine work.