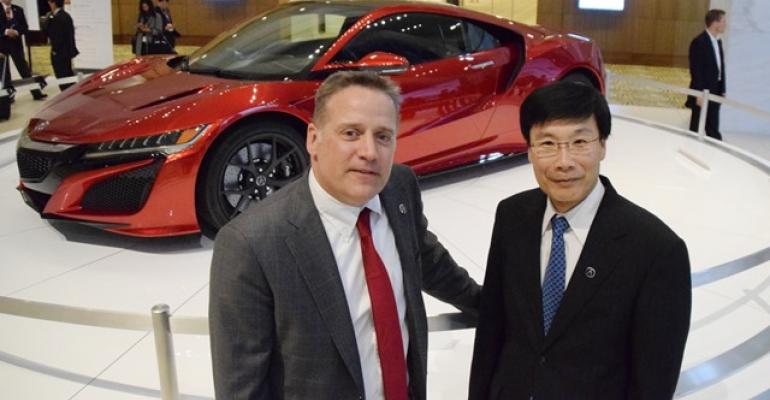 &ldquo;Ablation casting was a key concept in order to produce this spaceframe,&rdquo; Chief Engineer Ted Klaus says of the new NSX. &ldquo;Without being able to apply castings at all the suspension points, we couldn&rsquo;t produce a body this rigid.&rdquo;

DETROIT – The automotive world will have to wait a little longer for horsepower and torque numbers and fuel-economy ratings for the all-new Acura NSX hybrid supercar, but Honda uses this week’s SAE World Congress to trickle out some tantalizing nuggets of information about the car’s body rigidity.

For instance, the NSX will be the world’s first vehicle to apply the process of aluminum ablation casting to produce large ultra-rigid nodes or junction points within the crush zones of the body. The ablation nodes will have sockets into which aluminum extrusions will be inserted and then MIG-welded as part of the spaceframe.

The process, invented by Alotech Limited, involves casting the part in sand, which is then washed away with high-powered jets while the water also acts quickly to cool the component.

Honda opted for the ablation process because conventional castings would have been too brittle to deliver the required energy absorption characteristics.

The ablation castings also allow Honda to use traditional aluminum castings at other strategic locations in the spaceframe and as the primary mounting points for suspension and power-unit components.

“Without being able to apply castings at all the suspension points, we couldn’t produce a body this rigid,” Klaus says.

Shawn Tarr, principal engineer and Acura NSX body development leader, gets credit for pushing for the use of ablation casting. He says the binder that holds the sand together within the casting is water-soluble.

“That allows the sand to get out of the way really fast, so then the water can quench the part,” he says.

Tarr says Honda chose an aluminum spaceframe instead of a carbon-fiber monocoque to enable easy repairability.

The ablation castings and extrusion members “were designed in a way that you can extract those by removing the MIG-welds, and then we have a service part, a front clip, that would be replaced entirely,” Tarr says.

Dealers will be trained to do the work. “It’s a very strong concept so the customer doesn’t have to go to some independent shop,” Klaus says. “They will go to an authorized shop to have these high-quality repairs done, which is a real challenge in the supercar market today.”

Honda Expects Powertrain to Dust i8

On the powertrain front, calibration is ongoing, and the fundamentals remain in place: an all-new 3.5L twin-turbo 75-degree longitudinal V-6 mid-mounted with a 9-speed dual-clutch transmission.

The engine will work in tandem with three electric motors – two mounted to the front axle and a third paired up in the rear. The motors will function based on the driver’s power demands and will draw energy from a lithium-ion battery pack.

The vehicle employs 10 heat exchangers, and aerodynamics have been finely tuned to provide additional cooling for the engine compartment while also adding front and rear downforce at high speeds. Honda claims best-in-class lift balance with the NSX.

The car’s coefficient of drag has not yet been released, nor has curb weight.

Klaus says the NSX will compete with “other $150,000 super sports cars.” From a performance standpoint, the Acura might challenge much more expensive exotics, such as the Porsche 918 Spyder, Ferrari LaFerrari and McLaren P1, all of them using hybrid-electric powertrains.

“It’s neat to see them electrifying their driving experience, but that’s a different market,” Klaus says.

By price, the dramatic BMW i8 2+2 coupe is a rival, but Klaus says the NSX will outperform it by a wide margin.

“Look at the i8 layout from a bird’s eye view or from the side, and look where they (BMW) placed their components,” Klaus says. “I don’t see how they can possibly maximize the use of their four tires the way we can. The NSX is about peak performance, consistent performance and performance for real roads and real drivers.”

By the end of this year, Honda plans to deliver the second-generation NSX to dealerships from its new Performance Manufacturing Center in Marysville, OH.