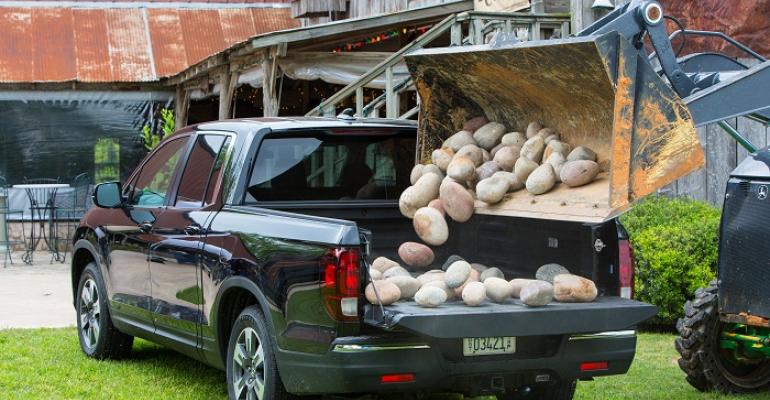 Audio, the ability to connect a TV and composite material that won&rsquo;t mar easily are some of the innovations featured in the new midsize pickup&rsquo;s bed.

SAN ANTONIO – Honda approached development of the ’17 Ridgeline intending to offer the most multifaceted bed the U.S. truck sector has seen.

The automaker brought to market a dual-action tailgate and in-bed trunk in the original Ridgeline. While retaining both features for the second-generation model, on sale later this month, it wanted to innovate further to give the U.S. market’s only unibody pickup more advantages over the midsize-truck competition.

The fun factor comes from features such as an 115V 150W-400W AC inverter in a side panel to hook up a flat-screen TV and an industry-first truck-bed audio system.

“So we of course feel this technology really makes us stand out as the ultimate tailgating vehicle on the market today,” Bill Kruse, Ridgeline assistant larger project leader-Honda R&D, says of the in-bed audio system’s compatibility with pregame parties.

Kruse and his team approached Honda’s audio engineers with an idea to install jacks in the Ridgeline’s bed so owners could plug in their own speakers. But after brainstorming the engineers came up with a better idea: Why not make the bed the speakers?

The trick is accomplished via the use of six Panasonic exciters, two placed under the headboard of the Ridgeline’s bed and two under each side panel.

Functioning as a magnet in a speaker would, the exciter, thanks to a vibrating chip, moves and receives current. The bed, acting like a speaker cone, pushes the sound.

Like the first-generation Ridgeline bed, the new bed floor essentially is plastic, made of sheet-molded composite with long fibers. However, Kruse says the SMC in the new floor is stronger than the SMC bed floor in the ’06-’14 Ridgeline.

Side panels and the headboard are made of UV-stable polypropylene with long-glass fiber.

Kruse says the polypropylene is a good material to transmit vibration and notes the exciters are completely sealed and waterproof.

“You can use (the in-bed audio) while you’re spraying out the bed or washing your car,” Kruse says, adding Honda also made sure the inverters can’t be damaged by impact forces such as falling rocks or a sliding toolbox.

The in-bed audio is activated via the interior touchscreen’s audio-source menu.

One thing that could affect sound is a bed full of mulch. Honda tested such a scenario and found sound was muffled, similar to someone putting their hand over a speaker cone.

Unlike the old Ridgeline bed, which used painted SMC for UV protection, the new bed has UV protection embedded in the SMC.

“The problem with any truck bed is, it will get used like a truck bed. The paint’s gonna get scratched, it’s gonna get dinged,” says Steve Behm, body large project leader for the Ridgeline.

And the original Ridgeline bed did get scratched, even under light-duty loads, a failure that was a top complaint among first-gen owners.

“(Jagged loads) will obviously damage some of your paint coverage,” Baines says. “Long-term, that can lead to red rust and other problems in the vehicle.”

Honda invites media to scratch samples of both the first- and second-gen beds with a hand-held gardening cultivator at the event here, with the original bed composite revealing more obvious scars.

With bed safety in mind, and to limit pranksters who may want to create a rolling entertainment center, the in-bed audio cuts off at speeds above 10 mph (16 km/h), while the inverter is capable of 400W only when the Ridgeline is in park and the engine is running.

Honda also conducted a cargo-retention test to ensure the bulkhead between the cabin and bed wouldn’t deform in a front crash.

Honda also has made the corrugations in the bed floor narrower “for improved footing,” created two molded seats on the inner tailgate and flattened the in-bed trunk floor by rerouting exhaust-system components.