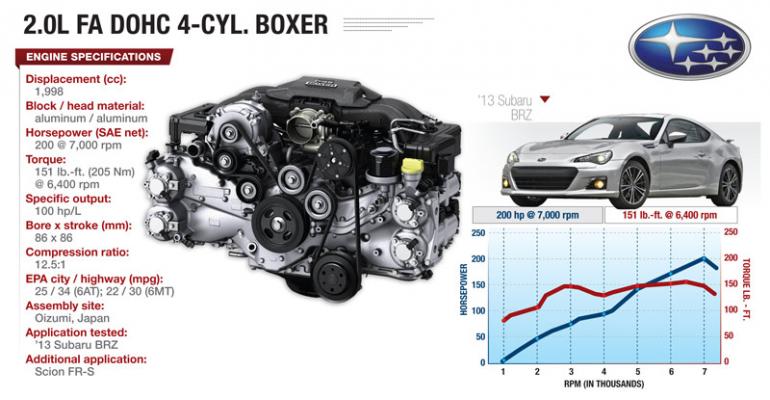 The good news is there already is a turbo version. The bad news is it won&rsquo;t fit in the Subaru BRZ and Scion FR-S.

The Ward’s 10 Best Engines competition has recognized outstanding powertrain achievement for 19 years. In this installment of the 2013 Behind the 10 Best Engines series, WardsAuto looks at the development of Subaru’s 2.0L FA naturally aspirated boxer engine.

Ever since Volkswagen phased out the original Beetle in the 1970s, H-shaped, opposed-piston, "boxer" engines have been rare in vehicles in the U.S.

Aside from some iconic BMW and Honda motorcycles, rear-engine Porsches and front-engine, all-wheel-drive Subarus are among the few mass-market vehicles currently using engines with horizontal layouts. Both auto makers use them well.

Given the boxer engine's packaging, dynamic balance and low-center-of-gravity advantages, it should be more popular, but powertrain engineers there are shortcomings.

“It can be more expensive to design an engine that way,” Subaru of America Product Manager David Sullivan told us three years ago when we honored the auto maker’s 2.5L turbocharged 4-cyl. as one of Ward's 10 Best Engines in 2010.

“And it drives us into using unique transmissions. Our rear-facing block does not meet up with most common transmissions, so we manufacture all of our own. That could be one disadvantage.”

Subaru flat fours of the not-too-distant past have been criticized for being a bit rough and not especially fuel efficient, the latter partly due to the standard AWD system they are coupled with on all Subaru models.

But the lovely 2.0L naturally aspirated H-4 that drives only the rear wheels of the Subaru BRZ and Scion's near-identical FR-S sports car, is a well-refined beauty.
While these fun-to-drive sport-coupe cousins are the products of a joint venture between Fuji Heavy Industries and Toyota, this power-dense (100 hp per liter) aluminum H-4 is pure Subaru, except for its unique Toyota fuel-injection system.

The high-pressure direct injection is supplemented at start-up and in low-load cruise conditions by conventional port injection to achieve ideal combustion for the optimum balance of output and efficiency.

By spraying fuel directly into the combustion chambers, the DI system provides a cooling effect that enables an unusually high 12.5:1 compression ratio and maximizes efficiency. But in light- and medium-load conditions, switching to port injection helps produce precise combustion and improves performance and efficiency in these situations.

Both block and heads are aluminum, the dual overhead camshafts on each cylinder bank are chain-driven, and the 4-2-1 exhaust manifold leads eventually to dual outlets tuned for a proper throaty exhaust note. Some intake sound also is piped into the cabin to add aural entertainment value.

Unrelated to any previous Subaru H-4, the new engine uses a “square” architecture, meaning its bore and stroke dimensions are the same at 3.38 ins. (86 mm), part of the reason for its quick-revving personality and 7,400 rpm redline.

Unlike some high-revving, high-specific-output sports-car engines, the 2.0L FA delivers a delightfully broad torque curve, largely thanks to its dual-variable valve timing, which Subaru calls "Dual Active Valve Control System." And the ’13 BRZ boasts 22 /30 mpg (10.7-7.8 L/100 km) city/highway with the manual transmission and 25/34 mpg (9.4-6.9 L/100 km) with the automatic.

"The 2.0L FA...musters luscious mid-range torque, loves to rev hard and sounds tremendous, while being sedate at idle," write WardsAuto editors, adding that "it clobbers other naturally aspirated fours."

Through an interpreter, we ask Nobuo Kyotoku, a project team manager in the engine design department. at Fuji's Subaru Engineering Div., about the most difficult challenges the FA engine team faced during development.

One of the toughest, he says, was making it compact and short (in height) enough to be mounted low and far back in the sports cars' chassis for the lowest-possible center of gravity and 52% front, 48% rear weight distribution.

"Because the BRZ is a sports car, achieving its power and performance targets without sacrificing fuel efficiency was a challenge,” he says. “We needed a high-revving engine with sufficient power and enhanced durability and lubrication to withstand high-rpm operation."

Another challenge unique to boxer engines (ask Porsche) was maintaining sufficient lubrication during sustained high-lateral-load cornering. This is mostly a problem that occurs on the race track, when g-forces tend to drive oil to the outside cylinders while potentially starving the inside ones.

To keep the oil circulating properly under such conditions, the team designed special guides that help the cam chain carry oil from the outside cylinders back to the sump.

Getting enough air in and exhaust out smoothly and efficiently was another challenge, and one that required a lot of testing and development. Also, because of its high-revving nature, all of the engine's reciprocating components were designed to be as light as possible.

Because Subaru is known for powerful turbocharged engines in many of its other cars, and because this new FA H-4 was designed to power a pair of svelte-looking, hot-handling, affordable sports cars, the obvious question has been repeated by enthusiasts and the motoring press ever since the BRZ/FR-S mid-2012 introduction: "Will we see a turbocharged version any time soon?" The answer, Kyotoku says, is yes and no.

Yes, because the turbocharged 2.0L H-4 offered in Subaru's just-introduced Forester cross/utility vehicle is a boosted version of this same new FA engine. But the answer also is no, because that version is unlikely to find its way into the BRZ/FR-S.

Why? Primarily because there is insufficient packaging space to add the bottom-mounted turbocharger under the sports car's long, low hood, Kyotoku says.

Even if the turbo 4-cyl. somehow could be wedged into the sports cars, it would add both a lot of cost and up-front weight that impedes balanced handling.

Even so, there remain many opportunities for other improvements down the road that can increase performance and fuel economy without sacrificing refinement or other customer-pleasing features, Kyotoku says, adding that electrically driven accessories are a possibility in addition to the usual efforts to reduce friction and enhance combustion.

"Developing this high-technology, high-revving, lightweight engine was a difficult challenge, and the development time was very short compared to other programs," he says. “But the idea of the project was to please customers, and we feel very good about the customer feedback we have received."