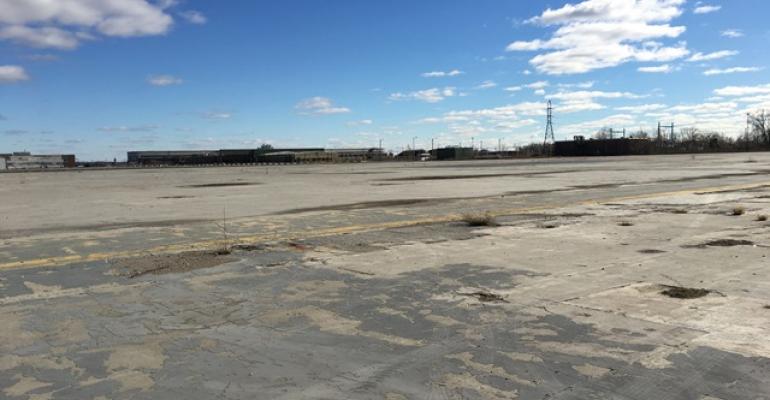 The first of three test tracks to be built on the grounds of a one-time World War II bomber plant, a 2.5-mile highway loop, is expected to be in operation by the end of 2017.

YPSILANTI TWP, MI – A new 335-acre (136-ha) autonomous-vehicle proving ground will be open for business here a year from now, says the non-profit American Center for Mobility, which held a ceremonial groundbreaking for the facility Monday.

The ACM test track and campus, being built with $20 million in state funding but designed to draw dollars from automakers and suppliers looking to test emerging mobility technology, will be completed in three phases between now and 2019, says organization President and CEO John Maddox.

ACM, a partnership of the Michigan Department of Transportation, Michigan Economic Development Corp., the University of Michigan and a handful of other organizations, says it has received 45 letters of support from automakers, suppliers and researchers.

“Ford, General Motors and Toyota have embraced us,” Maddox notes.

The groundbreaking ceremony was jam-packed with local dignitaries and policy makers, including Michigan Gov. Rick Snyder, U.S. Sens. Gary Peters and Debbie Stabenow and U.S. Rep. Debbie Dingell, all of whom see the new R&D facility as putting Michigan on the leading edge of autonomous-vehicle development.

“Michigan is reinventing the way the world moves,” Snyder says. “This world-class facility will put Michigan at the forefront of the autonomous movement to ensure we lead the way as the auto industry transforms into the mobility industry.”

Snyder says he plans to sign into law as early as next week a bill that will allow Michigan residents to buy and operate autonomous vehicles on public roads as soon as they are available.

“That sets the framework to do more testing in Michigan,” he says of the legislation.

The proving ground will be constructed on the site of Ford’s Willow Run factory that made B-24 bombers during World War II and became one of the symbols of U.S. industrial might, or what President Roosevelt labeled the Arsenal of Democracy. It later manufactured powertrains for General Motors.

The site now is owned by Willow Run Arsenal of Democracy Landholdings, which acquired the property for $1.2 million in a sale closed earlier this month and will lease it to ACM.

The test tracks – there will be several for validating autonomous technology under different traffic, road and environmental conditions – will be laid right over the concrete flooring that is one of the few remaining features of the massive Willow Run plant.

Special footings where machine tools once stood are still evident along spots in the concrete flooring, where the plant’s Z-shaped, mile-long assembly line once knocked out a plane every hour during its production peak.

Only a few structures remain on the grounds that run adjacent to Willow Run airport. Some will be torn down and others reused, including a huge hangar-like building earmarked for an engineering and conference center with capacity for 1,500 people.

“There will be demand for conference space (for programs centering on autonomous vehicles) over the next 10 to 20 years,” Maddox says, pointing to the site’s proximity to Detroit’s main airport as a potential draw for conference organizers.

ACM also will make use of an existing triple-decker highway entrance/exit ramp and road signs in constructing its first test track and expects to be able to use abandoned rail spurs at the site for future test circuits as well. Giant rainwater collection tanks will be refurbished to supply water to wet down or ice the track to simulate inclement weather.

In addition to the proving grounds, the site is expected to serve as a technology hub, allowing companies and academic researchers to rent office space, garages and other facilities to aid future product development.

The facility will be completed in three stages Maddox says. The first phase of construction, which is expected to fully ramp up in the spring and be finished in December 2017, will result in a 2.5-mile (4-km) highway test circuit.

ACM is building its highway track first, because many car and commercial-truck manufacturers believe autonomous functionality initially will be available only for highway driving.

“And we won’t just be testing vehicles,” Maddox adds, saying experimentation with vehicle-to-infrastructure technology also will be a main focus at the facility.

A second phase, targeted for completion in 2018 will add the engineering campus and convention center and a second track to test autonomous-vehicle operation at surface-road intersections.

The final leg of development will be fully operational by the end of 2019 and include tracks that mimic urban, rural and commercial environments, adding such things as pedestrian traffic, gas stations and parking garages for autonomous vehicles to navigate in and around.

“But there always will be changes going on, so we’ll never really be done,” Maddox says of the test site.

Officials say the ACM facility will be complementary to, not competitive with, the 32-acre (13-ha) Mcity operation in nearby Ann Arbor that is operated in part through the University of Michigan.

“We’re designing this facility to be highly coordinated with Mcity and to be able to function together for the next 20 years,” Maddox says, characterizing Mcity as more of a prototype-testing operation and ACM as a later-stage product-development and certification facility.

Plans are for the two to share data, so results from testing at one operation can be accessed at the other.

Snyder says ACM builds on Mcity and is the next logistical step in Michigan’s efforts to be an autonomous-vehicle development leader.

“I thought we were very advanced when we did Mcity,” the governor says. “That opened the middle of last year (and) we filled up Mcity immediately – to overcapacity. And it really became clear there is demand in the industry from multiple parties…for places like this on an even larger scale.

ACM will be the first purpose-built proving grounds of its size for autonomous-vehicle testing in the world, but it is expected to have competition from other facilities in both the U.S. and abroad.

Snyder acknowledges there are “multiple places around the world” that would be competitive with the planned ACM facility, but says “part of it is building the right bridges with them. (So) how we can be the centerpiece, but also bring these things together.”