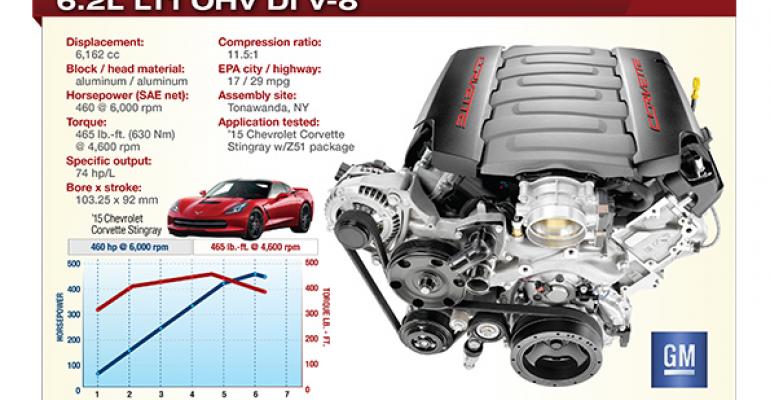 <p><strong>The OHV LT1 is much smaller and lighter than DOHC V-8s with comparable output.</strong></p>
Technology

The classic image of a V-8 is big and thirsty. Engineers set out to dispel that notion by making the small-block Gen V engines extremely efficient. Along the way, some dynamometers also got toasted.

Ward’s 10 Best Engines competition has recognized outstanding powertrains for 21 years. This installment of the 2015 Behind the 10 Best Engines series looks at the development of General Motors’ fearsome 6.2L V-8 in the Chevy Corvette.

There is no doubt WardsAuto editors love the ’15 Corvette's LT1 V-8, now a 2-time winner of a Ward’s 10 Best Engines trophy.

They praise it as a naturally aspirated V-8 that purrs at idle, spins smoothly in casual driving as if it's barely working and "breathes fire down the stretch.”

And they laud not only its impressive performance but also its surprising fuel efficiency, thanks to variable valve timing and Active Fuel Management, which allows the LT1 to run in 4-cyl. mode while cruising on the expressway and other light-load conditions.

But the 8AT isn't just an efficiency play, editors point out. It also enables a 3.7-second run to 60 mph (97 km/h), making it faster than the manual.

And the automatic-equipped ’15 Corvette Z06, powered by a monster 650-hp supercharged LT4 variant of the 6.2L, can launch that car from rest to 60 mph in a tick under 3.0 seconds. That is seriously quick.

GM says this impressive balance of output and efficiency extends to other members of this new EcoTec3 Generation V small-block OHV engine family, including the 4.3L V-6, the 5.3L V-8 and the 6.2L V-8 that power its new pickups and SUVs.

Key suppliers for the entire lineup include Nemak for the aluminum blocks and head castings; Eaton for valves, lifters and the LT4's supercharger; Federal-Mogul for the pistons; and Stanadyne for the high-pressure fuel pump.

“The LT1 is the banner engine,” says Jordan Lee, chief engineer and program manager for GM's small-block engines, "but it represents the whole Gen V family, which all use the same unique technology set to achieve not only what we think is class-leading power, torque and fuel economy but also improved drivability that delights our customers. The V-6, our value engine in pickup trucks, has all the same technologies – cam phasing, direct injection and AFM cylinder deactivation – that are in our LT1 and LT4 V-8s.”

Lee adds that these three key technologies are synergistic. “The way you improve fuel economy is by being in deactivated-cylinder mode as much as possible. And to extend the 4-cyl. range, you need a lot of torque.”

As long as the engine can deliver the torque requested by the driver's throttle foot using just four cylinders, it can continue to run in fuel-saving 4-cyl. mode. And the DI plays a major role because it enables significantly higher compression ratios, which dramatically increases low and midrange torque and top-end power.

“Increasing compression ratio is one of the best knobs you can turn in engine design to improve not only power and torque but also efficiency,” Lee says. “So the Gen Vs across the board relative to the Gen IV engines they replaced have class-leading low and midrange torque, which allows us to run in cylinder-deactivation mode longer to significantly improve our real-world fuel economy.

“Unlike some of our competitors’ customers, ours brag about beating the fuel-economy numbers on their labels. We wanted real-world fuel economy, not just label numbers, which is why we put a lot of money and engineering development into Active Fuel Management.”

These five Gen V variants share components wherever possible, though the bore sizes in the 4.3L V-6 and the 5.3L V-8 are different from that of the 6.2L V-8s, and the two Corvette engines are different animals from the same-size truck engine in terms of calibration and some hardware. “We need very good oil control in the Corvette engines for up to 1.2 g (lateral acceleration), so we have dry-sump systems on most Corvette applications,” Lee says.

“There's a tremendous amount of engineering effort in developing a lubrication system to be very capable in track conditions. The truck engines don’t have that racetrack requirement, so they have conventional wet sumps.”

The Z06’s fearsome LT4 V-8 presented another development challenge. It wasn’t a backbreaker, but it did break other things, especially dynamometers.

“We designed the LT1 with the pressure loads we would see with the LT4 in mind,” Lee says. “We had to harden some components, the crankshaft in particular. And we broke a lot of dynamometers. At 650 lb.-ft. (880 Nm) of torque, that engine is really hard on dynos. We had an inside joke when we ran durability tests that they were not only engine-durability but also dynamometer-durability tests."

Despite the Z06’s awe-inspiring specs, Lee believes there is no such thing as too much horsepower. “We have many knobs we can turn to make more power, and we’re working on engines all the time that would make the current ones seem weak-kneed. I would love to see 4-digit power numbers before I retire.”

Lee won’t talk about the rumored mid-engine Corvette that may or may not be in development, except to agree that the Gen V's very compact size and light weight relative to its output would be a major plus should a future version of it ever be positioned behind a cockpit.

“Power density is a really big factor for us,” he says. “We are always looking for ways to keep the engine as small and light as possible while still increasing power and torque, and we are extremely proud to have one of the smallest and lightest 650-hp engines in the world today.”

He emphasizes that while many industry watchers used to be focused on whether an engine should be OHV 2-valve or DOHC 4-valve configurations, most folks today are seeing engines for what they deliver in output and economy at a given price.

“As engineers, we just see valvetrain configuration and the components we have as tools in our toolbox to achieve the power, torque and efficiency we want. So I’m glad those arguments don’t have much value anymore.”