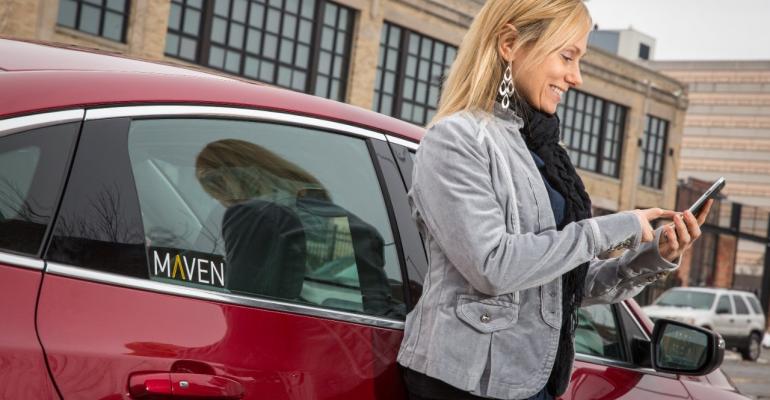 Maven aims to create a foothold in the rapidly expanding dash toward personal mobility, which starts with ride-sharing and ultimately is anticipated to encompass autonomous, or driverless, vehicles.

Maven: “One who is experienced or knowledgeable; (an) expert.”—Merriam Webster’s Deluxe Dictionary

WARREN, MI – You can’t buy a Maven at a General Motors dealership, but GM’s future may be riding on its newest brand.

Established in January 2016, Maven aims to create a foothold in the rapidly expanding dash toward personal mobility, which starts with ride-sharing, car-sharing and ride-hailing and ultimately is anticipated to encompass autonomous, or driverless, vehicles.

Headquartered in newly renovated space at GM’s Technical Center, Maven has 100 staffers here and sprinkled across the nation where it is spreading its wings. It operates in 14 U.S. cities and one in Canada, with more locations planned.

Maven is taking a three-prong approach to ride sharing:

Judging by the numbers, Maven is off to a robust start. In less than two years it has enlisted 90,000 members, 80% of whom are coveted tech-savvy millenials (age 18-34, some 92 million strong), says Peter Kosak, executive director of GM’s urban mobility programs. More than 12.5 million rides covering 200 million miles (322 million km) have been provided, he adds.

The star of GM’s car-sharing push is the Bolt electric vehicle introduced in February on the West Coast. The Bolt currently is the global EV range leader, achieving 238 miles (383 km) per charge.

Maven has 240 Bolts in its fleet with more in the pipeline. Besides the novelty of experiencing driving and riding in an EV, the Bolt also offers space for five passengers or, with rear seats folded, substantial cargo space, says Kosak.

Maven started with 25 Bolts in California and now has 75 operating there. The cars are available in San Francisco, Los Angeles and San Diego. They have been driven 2.2 million miles (3.5 million km) with 230,000 rides taken and 200,000 passengers, not counting the driver, Maven reports. The average daily trip is 135 miles (217 km), with 10% driven more than 240 miles (386 km), requiring interim fast charging.

EVs may become the favored vehicle for car- and ride-sharing because they are expected to pave the way for driverless cars. They also are environmentally friendly in smoggy cities because they emit no carbon dioxide and, obviously, aren’t subject to the whims of gasoline pricing.

To relieve EV range anxiety, more powerful Level 3 500V direct-current fast-charging stations can deliver a 160-mile (258-km) charge in just one hour, but they are not widely available. Boston, for example, has only four DCFC hookups.

Thinking ahead, GM is looking at possibly using electricity from wind and solar sources for EV charging, Kosak says.

For Maven City and Maven Gig rentals, GM pays for electricity used to charge the Bolts throughout the loans. It also pays for insurance, maintenance, repairs, transport, lifecycle and residual management for the entire Maven fleet.

GM pays for gas throughout the rental for Maven City (public car-sharing) vehicles only. These vehicles come with a gas-card in the vehicle, so renters can fill up along the way. For Maven Gig (short term rentals for freelancers), the vehicles will come with a full tank, but after that, renters need to pay for any additional gas fill-ups.

Maven’s overall fleet is estimated at 10,000 including 600 Maven City vehicles. The total includes new subcompacts, compacts, traditional sedans and SUVs and used GM vehicles coming out of rental fleets that otherwise might wind up at auction. Most of these are assigned to the Maven Gig fleet’s freelance operators.

“Not everyone needs that new-car smell,” Kosak observes.

He describes them as “1099 people,” referring to the IRS forms used by individuals who report their own miscellaneous income.

From Sharing to Ownership

But exactly what is Maven contributing to GM, aside from its ticket in the mobility and AV sweepstakes?

“We see it as an adjunct to and supplement to our core business,” Kosak says. “Right now it is an alternative to ownership in densely populated and congested areas, or where it’s not possible to own a vehicle. But we think it will also help us sell more vehicles” by exposing drivers and passengers to GM’s offerings – what some call “butts in the seat” marketing.

“Things are changing fast,” he says. “If this was a year ago or five years ago, a lot would be speculation or happening on PowerPoint,” he observes. “But now the distant future is happening.”

Maven allows GM to leverage its technology, says Kosak, especially in the EV sector. All Maven vehicles are equipped with GM’s OnStar system introduced in 1997. OnStar links each vehicle with an advisor 24/7, and famously can unlock your car or perform other actions with a simple phone call. OnStar provides navigation, emergency and security features plus Wi-Fi, and can manage, maintain and locate vehicles.

Intrinsic to Maven’s mission is working with local and state authorities on issues such as public parking availability, high usage routes and traffic trends. This effort already is under way in Los Angeles with other cities to follow.

So what does it take to join Maven? There is no membership fee. A smartphone is necessary because all transactions, commands and instructions are accomplished by using apps. Kosak recalls one millennial who looked in vain for an app on his cell phone to start his vehicle.

“Nope, you still have to press the starter button,” he says with a laugh.

Beyond that, a driver’s license with no DUIs or other major infractions is required, and there are extensive background checks. Further vetting of customers with pictures or even cameras in the vehicles might be added in the future.

Kosak allows that some memberships have been revoked, though he doesn’t say how many. He says at least one GM ride-sharing vehicle was totaled, but no serious injuries or fatalities have been recorded.

“You can’t have 200 million miles (driven) without some accidents,” he points out.

Before formally organizing Maven, GM in September 2015 partnered in offering ride-sharing in New York City from 110th Street south to downtown Manhattan where parking is extremely expensive and where many residents don’t own cars.

Ten GM vehicles were rented by the hour, then by the day, and included valet parking. “That let us access where car ownership is not rational,” says Kosak.

Maven launched in Ann Arbor, MI, 45 miles (72 km) west of Detroit and home of the University of Michigan.

“We started with a fleet of small cars like the Chevy Trax and Cruze for around the city and the Cadillac ATS for weekends,” Kosak recalls.

Most users didn’t own cars.

Ann Arbor was chosen because of its demographics, plethora of transient residents including U-M’s millennial students and parking availability.

Maven then turned to New York and since has branched out to the three California cities, Boston, Chicago, Detroit, Baltimore, Denver, Phoenix, Orlando, Jersey City, Washington, DC, and Kitchener-Waterloo, ON, Canada.

“The final chapter,” Kosak exclaims, “cannot even be envisioned.”