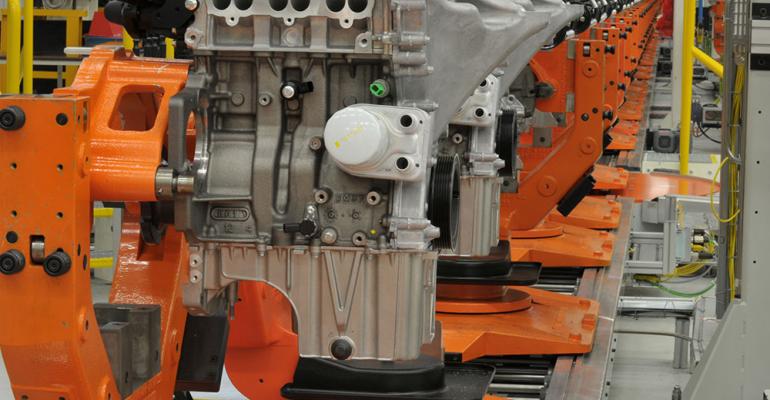 The crystal ball for what the future holds for automotive powertrains in 2025 still is cloudy, but it’s getting a little clearer for 2020.

Automakers are loath to reveal future strategies, but private conversations with top powertrain officials, interviews with key suppliers and a detailed analysis by WardsAuto forecasting partner AutomotiveCompass suggests sweeping changes are ahead that will have a profound impact on the industry but will barely be perceived by the auto-buying public.

The biggest changes most new-car owners are likely to notice six or seven years from now will be their vehicles’ much better fuel economy and the way their engines automatically shut off at stoplights.

Despite the focus on battery-electric vehicles and a new generation of fuel-cell-powered cars, EVs will account for a tiny sliver of global sales by 2020. However, some degree of electrification under the hood will be common, either in the form of a full hybrid-electric powertrain or microhybrid stop/start system.

But for those charged with meeting upcoming government emissions and fuel-economy mandates, the changes will be broad and deep.

The good news is fuel-economy and emissions targets heading into 2025 are quite similar among the world’s major automotive markets, says Wolfgang Breuer, head of powertrain business unit engine systems for supplier Continental.

However, Hofbauer makes it clear downsizing and turbocharging do not mean less performance. “You can get 300 hp out of a 1.8L turbocharged engine,” he says.

In addition to forced-induction and stop/start systems, AutomotiveCompass says the real winners in the foreseeable future will be producers of catalysts for emissions-control systems, electronics, highly developed fuel-injection systems, advanced clutching mechanisms and synthetic oils that can enhance fuel efficiency and withstand rising engine temperatures.

Among the many losers in the auto industry’s global push to increase efficiency and reduce emissions will be conventional cast iron used for engine blocks and V-8s. In addition, torque converters will wane if dual-clutch and continuously variable transmissions continue growing in popularity, as expected.

Complicating everything will be the uneven quality of fuel, which will limit the availability of the cleanest powertrains in some markets, perhaps including the U.S., whose fuels are well below Western Europe’s in octane, cetane and purity.

Alternative fuels will remain highly controversial and regionally biased. Ethanol will remain dominant in Brazil but is not expected to gain much traction in the rest of the world except as an additive.

The natural-gas boom in the U.S., created by the hydraulic fracturing drilling method, has some predicting a surge in vehicles powered by compressed natural gas.

But skeptics say aside from fleet vehicles with central refueling stations, CNG will not catch on with individual buyers because there is no CNG refueling infrastructure. They argue poor sales of Honda’s CNG-powered Civic are evidence there is little consumer demand.

Transmissions also will go through a significant regionally influenced evolution. Japanese OEMs will further the advancement and proliferation of continuously variable transmissions while Europeans focus on dual-clutch transmissions. U.S. automakers will concentrate on adding gears to traditional automatics, Maxim says.

Each region plays to its experience and strengths. European consumers moving from manuals to DCTs find them appealing, while Americans long accustomed to torque converters and smooth-shifting automatics find at least some DCTs jerky and unpleasant.

Most automotive enthusiasts disdain CVTs for their pulley-like power delivery, but they are well-accepted throughout Asia for efficiency and low cost. CVTs also are embraced by drivers of popular hybrid-electric vehicles such as the Toyota Prius.

From an engineering perspective, gasoline engines and diesels will start to take on each other’s characteristics. One little-known development is a “downspeeding” trend for gasoline engines aimed at creating high torque at low rpms at the expense of peak horsepower. The goal is a fatter torque curve and better drivability, but it will result in less ponies and a lower redline for the marketing department to brag about.

Concerns that diesel engines would be forced out of the marketplace by upcoming Euro 6 and U.S. LEV 3 emissions standards have been eliminated by diesel particulate filters, selective catalytic reduction systems and higher injection pressures, Continental’s Breuer says.

Some automakers are avoiding the issue by sticking with conventional multiport injection systems for the foreseeable future.

For automakers intent on keeping DI systems, the solution likely will be advancements in higher injection pressures, which will allow engineers to control combustion more precisely by injecting separate bursts of fuel during each combustion event, Breuer says.

In modern common-rail diesel systems, injection pressures of 26,000 psi (1,800 bar) allow fuel to be injected as many as eight times per combustion event. Higher-pressure systems are in the works.

Far higher pressures are possible using diesel-like injection systems, but that would require gasoline engines to be built more like diesels, resulting in significantly higher costs.

While the price of advanced injection systems can be daunting, Breuer says cleaner, more controlled combustion can save money on catalysts and exhaust aftertreatment systems and deliver a system cost that ultimately is lower.

For automakers, powertrain’s future promises to be full of challenges and pitfalls, but for smart suppliers, it is full of opportunities.

“We have an exciting future ahead of us,” says Breuer.