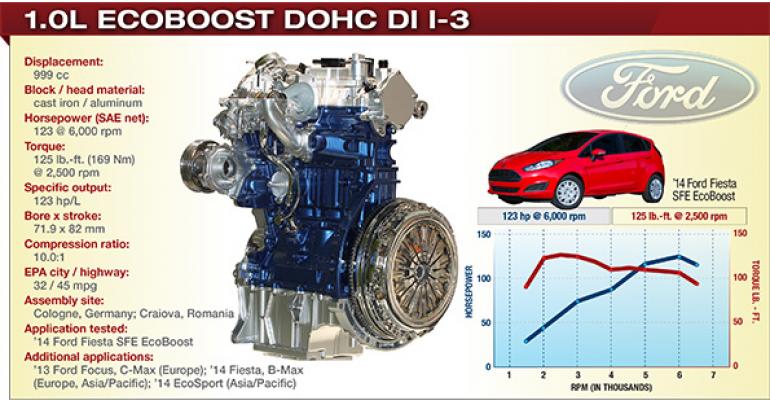 Good NVH without a balance shaft is just one of the engine&rsquo;s many pint-sized innovations.

As we know, an inline 6-cyl. engine is inherently balanced, one good reason why the typical BMW I-6 feels so silky smooth.

But it also is physically long, making it a tough fit in transverse front-wheel-drive applications even in large and midsize cars (though Volvo found a way with its lovely, but outgoing, 3.0L I-6), let alone in smaller cars.

That is why all other automakers still offering 6-cyl. power have moved to more compact and easier-to-package V-6s.

But a bank of three cylinders is inherently unbalanced, and mating two banks of three into a V-6 (depending on the angle between them) does little to help the problem.

V-6s typically use counter-rotating balance shafts to offset that unbalance, so imagine a 3-cyl. without balance shafts: Rough as a road full of potholes after a long, hard winter.

And given their inherent harshness, these new triples (as some call them), definitely need balance shafts to make them livable.

"A 3-cyl. has a natural first-order imbalance that is normally counteracted by a balance shaft," says Steve Gill, Ford's engine chief engineer.

"But that adds cost, weight and friction, which hurts efficiency. So we came up with the solution of putting imbalance on the flywheel and the front pulley and moving the imbalance plane from primarily vertical to primarily lateral, which can be accommodated in the engine mounts. That gives great refinement without the cost, weight and fuel-economy downsides of a balance shaft."

While adding flywheel and pulley weights doesn't completely eliminate a triple's first-order couple, changing that motion from vertical to horizontal makes it easier to counteract.

An I-3's natural vertical pitching and hop can be difficult to isolate, but the horizontal motion mostly can be absorbed by specially designed engine mounts.

Gill says balance shafts are intentionally heavy and driven by a system that requires lubrication, so doing without them also reduces the engine's lubrication complexity, and that, to his knowledge, is an industry first.

Its design dates back to 2005-06, when Ford was entering into its new era of One Ford and global cost sharing.

There was a clear need for these attributes beyond the European market, but North America wasn't high on its list at the time. Yet, two years after its European debut, it's here (with a 5-speed manual) in the U.S. Fiesta SFE and will be offered by late 2014 in a 6-speed-manual high-fuel-economy Focus.

No automatic yet, but an automated manual is a new option in Europe.

As always, finding the best balance among performance, fuel efficiency and emissions was a major challenge, and a couple of additional innovations help achieve those goals.

"The small displacement with direct injection gives us the fuel economy," Gill says.

"But to make it good, it also needs high power density. So one new development was the exhaust manifold integrated into the cylinder head and cooled by the cylinder-head cooling. We no longer have a high-temperature separate manifold that needs to be cooled by injecting more fuel, which hurts efficiency. Developing that involved a lot of thermal and mechanical challenges."

This was a Ford first, but the 1.5L and 2.0L EcoBoost I-4s and the new 2.7L EcoBoost V-6 also have integrated exhaust manifolds.

Other key contributors are variable intake and exhaust cam timing and the (Bosch-supplied) high-pressure fuel pump, which can deliver multiple injections per combustion cycle directly into the cylinders through 6-hole solenoid sprayers at up to 2,176 psi (150 bar).

"It's not the first 3-cyl. engine to be offered in the U.S., but it is the first one that truly is fun to drive," WardsAuto editors enthuse. Earlier U.S.-market I-3s (mostly from the 1980s and 1990s), were "synonymous with thrashy, underpowered econoboxes."

To achieve the desired drivability, “we had to develop a new turbocharger with a new supplier (Continental) to give good low-rpm response from just 1.0L capacity, which didn't exist at that time,” Gill says.

“To that we added scavenging with the dual variable-camshaft technology to allow a bit of overlap and flow-through to boost the turbocharger at low speeds, and we implemented transient overboost for additional torque on demand. The combination of those three innovations gives this small engine the response we wanted."

Overboost provides more turbocharged air to allow more fuel to be burned and generate more power. "Because it's transient, you can operate within the structural and mechanical limits of the engine," Gill says.

It can last up to 15 seconds. Then, when the driver lifts off the accelerator pedal, it resets and can provide another 15 seconds. "You could probably run it wide open for longer, but there are issues – emissions, power and fuel economy – so we give it to people when they need it, but not all the time."

So rowing through the little test Fiesta SFE's (only available) 5-speed manual transmission can be a bit of a hoot even while hitting great fuel-economy numbers: an EPA-rated 32/45 mpg (7.4-5.2 L/100 km) city/highway.

"It has high peak torque at low rpm, but it also likes to rev freely and has a robust exhaust note," WardsAuto editors noted. "One of the best-sounding entry-level engines I've ever heard," one commented.

Another important innovation is its belt-in-oil. Instead of a chain or a dry belt, the primary belt that drives its camshafts from the crankshaft runs through its oil pan, a first for a Ford gasoline engine.

"We've done that to reduce friction for fuel economy," Gill says. "It also reduces the length of the engine, and you only need one sealing surface."

Interestingly, this I-3 has no commonality with any I-4 or any other current Ford engine. It is an all-new, clean-sheet design sharing neither its architecture nor any common parts.

So this 2-time International Engine of the Year and first-time Ward's 10 Best Engines award winner is its own family of one right now, but likely not for long.