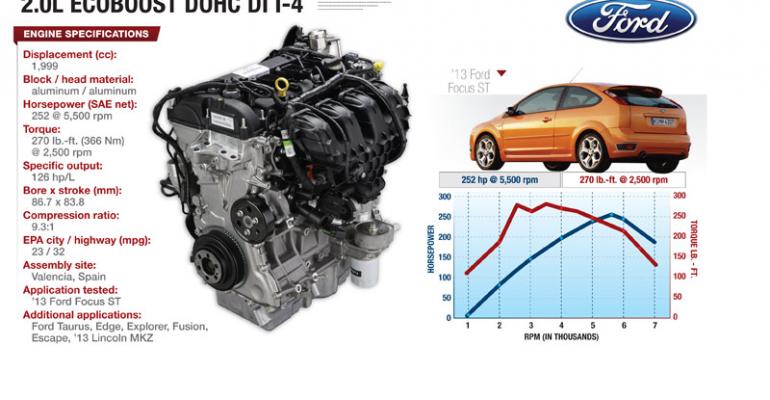 One of the development team&#39;s toughest challenges was meeting the engine&#39;s demanding performance requirements with regular fuel instead of premium.

The Ward’s 10 Best Engines competition has recognized outstanding powertrain achievement for 19 years. In this installment of the 2013 Behind the 10 Best Engines series, WardsAuto looks at the development of Ford’s 2.0L EcoBoost I-4.

As automakers toil relentlessly to squeeze ever-better fuel efficiency out of their vehicles, Ford is far from the only one combining three key technologies: turbocharging, gasoline direct injection and dual variable valve timing on smaller-displacement engines replacing larger ones.

But Ford is using this strategy on more engines and in higher volumes than anyone else, and the automaker has come up with the most memorable marketing tag to sum it all up for the vehicle-buying public: EcoBoost.

Ford EcoBoost engines have captured Ward’s 10 Best Engines awards in three of the four years since their U.S. introduction. The modest-sized but powerful 2.0L 4-cyl. won acclaim from WardsAuto editors not only for its application in the ’13 Ford Focus ST hot compact, but also for its “robust performance” in the much larger Taurus fullsize sedan.

In this engine, a BorgWarner turbocharger boosts airflow into the cylinders to generate more power, while a Bosch direct-injection system sprays fuel directly into the combustion chambers, where it evaporates and cools the intake air for better knock resistance and a more efficient burn. Ford’s twin independent variable cam timing (Ti-VCT) gives precise control of valve openings and closings to advance intake and retard exhaust events to optimize efficiency.

The engine also boasts another attribute few I-4s enjoy: An exhaust manifold fully integrated into the cylinder head. This is a Ford first that also appears on the automaker’s new 3-cyl. 1.0L EcoBoost engine and will be a feature on future Ford engines.

“An EcoBoost engine has to be fun to drive but also fuel-efficient,” says Ford Global Large I-4 program manager Scott Makowski.

“It had to meet stringent requirements for time-to-torque, yet efficiency was always in the forefront. And we had to be cost-conscious.

“So we started with the conventional EcoBoost technology of direct injection, turbocharging and twin independent variable cam timing. Then we integrated the exhaust manifold into the cylinder head, which improves pulse energy to the turbo to enable the critical time-to-torque measurement for that fun-to-drive performance,” he says.

“It also gives us quicker warm-up and helps us quite a bit on the cost side. That was a pretty big deal for us.”

While this engine shares the manufacturing footprint, bore centers and deck height of Ford’s long-running Duratec I-4 and is built on the same flexible assembly line, it shares none of the Duratec’s major components.

“When you’re running at that kind of horsepower per liter (in the EcoBoost), you have to look at everything,” Makowski says.

“From the bottom up, we went with a high-strength cast-steel crankshaft and forged rods, increased the strength of the block and the NVH (noise, vibration and harshness) ribbing and added cooling between the bores to carry heat away.

“And we did an all-new cylinder head, new valve sizes and sodium-filled valves. So the whole air path, heat management and overall strength of the engine were updated.”

“Some other OEMs are running premium fuel,” he says. “But when you’re running regular fuel with direct injection, it’s the precision, control and choice of spray patterns.

“You have tiny droplets shooting (from seven individual jets on each injector) into a very small chamber, and you don’t want to wet the walls or hit the tops of the pistons, so you need the right spray patterns to balance everything for multiple speeds and loads.”

The iterations and trade-offs necessary for high speed, low speed, high load and low load; getting it to be able to run on regular or premium fuel; developing the bowl on top of the piston and the entire combustion system; requires incredible attention to detail, Makowski says, evaluating all the alternatives in the spray-pattern choices through combustion development, including visual in-cylinder and single-cylinder work.

“You’re balancing fuel dilution, smoke generation and a lot of other elements, which leads you to split injection and sometimes pulse injection. It’s a very interesting set of trade-offs.”

While the 2.0L EcoBoost’s turbocharger is a single-scroll design, not a twin turbo or twin scroll, there is little discernible turbo lag. This partly is due to the integrated exhaust manifold, which effectively funnels pulse energy to the turbine wheel, and partly because the turbocharger is carefully right-sized.

“If you’re chasing power, there is a tendency to go larger because you need to push more air. But it’s a very fine balance. You have to pick the right size. You don’t want a too-large turbine and compressor wheel with large inertia. We have a high-strength titanium, almost aerospace-grade, wheel that is very small in diameter and very light.”

Unlike a growing number of state-of-the-art engines, none of this engine’s pumps or accessories is electric. But some or all belt-driven devices could be electrified down the road as the need for more efficiency accelerates.

“We’re down to the nitty-gritty trying to pull out every bit of efficiency,” Makowski says. “So you look at parasitic and friction losses as well as the combustion process. You will see in the future that we will be getting more with less yet again: Getting better fuel economy, but not by sacrificing power. There is a lot of untapped potential still there.”

He adds that an “aha” moment occurred for him a while ago when a journalist driving a 2.0L vehicle couldn’t believe it was a 4-cyl. engine, not a V-6.

“So (the writer) got out, looked under the hood and snapped a picture,” Makowski says. “That was when I thought, ‘You know, I think we’ve really done it here. It just doesn’t feel like a 2.0L. This is something special.’”

The 2.0L I-4 is Ford’s most popular EcoBoost engine, with more than 300,000 sold globally to date in vehicles ranging from the Focus ST through the Fusion and Taurus cars to the Escape and Edge and Explorer CUVs, as well as the Lincoln MKZ.

A lot of technology that was developed for the 2.0L EcoBoost is being shared with other engine programs that Makowski can’t yet talk about.

The fact there is one current rear-wheel-drive application, the Australian Ford Falcon, leads to speculation that it might be an important engine choice in the next-generation Mustang coming for 2015. “You never know,” Makowski says. “Anything could happen.”