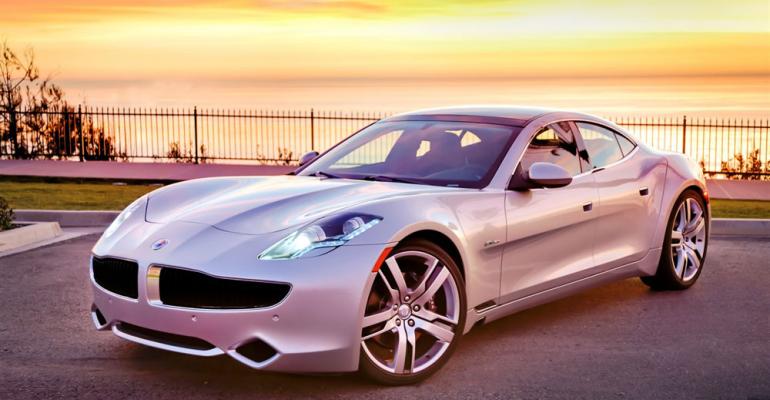 Bob Lutz tells WardsAuto VL has received hundreds of inquiries from Karma owners who may have an interest in converting their cars to V-8 power.

VL Productions, which is converting the Fisker Karma electric vehicle that is renamed the Destino and powered by a 556-hp General Motors V-8 engine, won’t be adversely affected by the niche auto maker’s sliding fortunes.

That’s the word from Bob Lutz, who with partner Gilbert Villarreal is developing the $185,000 Destino supercar for sale later this year.

He also tells WardsAuto VL has received hundreds of inquiries from Karma owners who have an interest in converting their cars to V-8 power and that VL may obtain Karmas from dealers seeking to liquidate their inventories.

“We’ve heard from hundreds of Karma owners, with about 10% who may want to convert their cars, because sooner or later the cars might wind up as boat anchors,” he says.

VL currently has 100 orders for the Destino, with interest high in the Middle East. Vehicle deliveries are scheduled for the year’s third quarter, but only after VL meets its own quality standards, plus governmental safety and emissions regulations.

That’s still the goal, but the company instead has switched to the 6.2L, 556-hp supercharged V-8 used in Cadillac’s CTS-V.

“Most people want automatics in these types of cars, and we didn’t have a suitable 6-speed for the ZR1 (Corvette) engine,” Lutz says, adding the CTS-V will be mated to a GM-supplied 6-speed.

If Fisker does not survive, he says VL eventually could work with the auto maker’s suppliers to build the Karma/Destino itself, while admitting that might produce “a logistics hassle.”