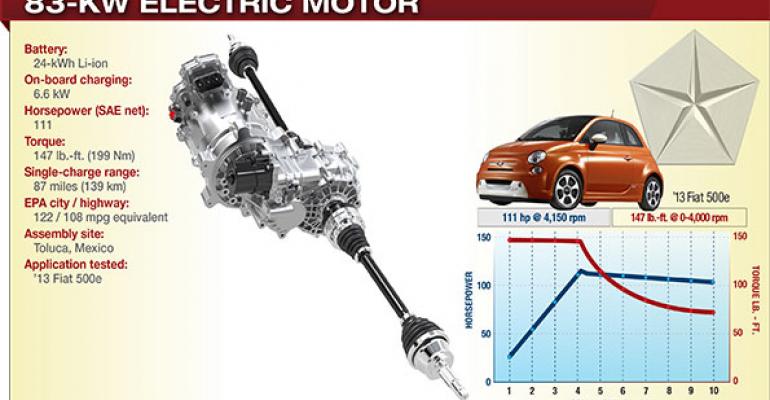 WardsAuto editors test and evaluate not only gas and diesel but also hybrid-electric (HEV) and battery-electric (BEV) powertrains for Ward's 10 Best Engines awards, and some end up winners.

Chevy's Volt and Nissan's Leaf both carried away trophies when they were introduced three years ago, and the battery-powered Fiat 500e is a 2014 10 Best Engines winner.

The Fiat brand, back in the U.S. after a 27-year hiatus and now part of Fiat Chrysler Automobiles, launched its 500 minicar here for 2012, then followed up with this surprisingly capable electric version.

Available only in California at first (and some other states later), it boasts pleasingly torquey performance from its 111-hp electric motor along with an EPA-rated 87-mile (139-km) driving range. Its EPA-equivalent "fuel economy" ratings also are impressive at 122/108 MPGe (1.9-2.1 L/100 km) city/highway.

"The 500e dashes from stoplights with such confidence that even hard-hearted internal-combustion devotees will find themselves recalibrating their perceptions after a test drive," one WardsAuto editor writes, while at least two others describe it as the best EV they've ever driven.

The cheeky little Fiat 500 was the natural platform choice to deliver one of the team's key priorities: "Making it a fun-to-drive car that people would enjoy and would feel natural to them," says Fiat Chrysler global director for electrification Mike Duhaime. They also targeted 100 miles  (161 km) of unadjusted city driving range to compliment the EPA combined 87-mile range.

Another design criterion was a low center of gravity (which called for mounting both battery and motor low in the chassis) to match the gas 500's agile handling despite the EV conversion's added weight. "But when you go to low-rolling-resistance tires," Duhaime adds, "you get a different tire patch with slightly slipperier tires. Still, that combination kept it pretty much fun to drive."

One of the toughest challenges, as always with a BEV, was balancing the battery to maximize range without adding too much package size, weight and cost. "To get the performance, we sized the electric machines and gearbox to complement the battery,” Duhaime says. “We ended up with an 83-kW motor, which puts out 200 Nm (147 lb.-ft.) of torque.

Another challenge was achieving the necessary powertrain efficiencies. Their targets were more than 80% for the motor and gearbox and high 90s for the power electronics. "We use about 29 kWh per 100 miles (161 km) of range," Duhaime says (5 more kWh than the battery holds).

“Because this EV conversion program was Chrysler's first, the team worked hard on the control systems to balance the powertrain and braking inputs and responses. Blending an EV's brakes between friction and regenerative braking always is a challenge, and it had to be done while maintaining the car's sporting character yet optimizing its driving efficiency.

"The brakes are fully blended at a variable rate depending on vehicle speed and the amount of braking you're trying to do," Duhaime says.

"It can put most of the energy back into the battery, depending on conditions. Or, in case of a panic stop, we let the full friction brakes take over immediately to stop the car."

Unlike some EVs, the 500e makes do without an "Eco" mode that changes calibrations for added efficiency. "Part of our design direction was to have a single drive mode so it would feel and drive like a normal vehicle," Duhaime says. "So we chose to make the controls manage and balance all the attributes to drive as efficiently as possible but still have the performance when you want it."

But there is a driver-selectable low-range mode (analogous to a conventional automatic transmission's "Low" gear) that decelerates the car at a higher rate during coast-down to put more energy back into the battery.

For the next-generation Chrysler Fiat BEV, cost and driving range, as always, are key priorities. Duhaime confirms the team is researching – both internally and with suppliers and universities – battery chemistry and lower-cost, higher-efficiency components.

"As you look at battery cost and performance," he says, "the key is energy density, how much energy can we store in the same size for the same cost. And you will start seeing that increase, which means that for the same battery size and cost, we can increase the range. Or, if we're satisfied with the range, we can use less battery to achieve it."

He adds pointedly that the car was engineered by the Chrysler team, not by Fiat or a "turn-key" EV supplier, as some have surmised: "Chrysler is the center of electrification excellence for all of Fiat Chrysler. We took the base vehicle, purchased some components from suppliers and did the conversion. We did all the design and integration work, the vehicle dynamics and aerodynamic development and the NVH character,” Duhaime says.

"Also, the power and performance balancing was all done by us and our controls groups. There are some low-level controls that suppliers do for us, but we do the supervisory controls ourselves. In some cases, we co-designed with suppliers, but our engineers integrated the parts into the vehicle...everything that gives the car its character, the specifications of what we wanted the components to be and what the efficiencies needed to be."

Thanks to mandated Zero Emissions Vehicle sales by California and several other states, at least 18 electrically powered vehicles are expected to be available in the U.S. in the very near future.

With a starting price of about $32,000, up to $13,000 of federal and state incentives available and leases starting at about $200 per month, the 500e will be the most accessible fun-to-drive candidate.

Fiat Chrysler CEO Sergio Marchionne openly admits his company is doing the 500e (and future electrified vehicles) only to comply with those mandates, and that it will lose $14,000 on every 500e it leases or sells.
But that did not discourage his 500e team from engineering and developing it to be enjoyable to drive, with one of the best available BEV powertrains. Hence our well-deserved kudos.