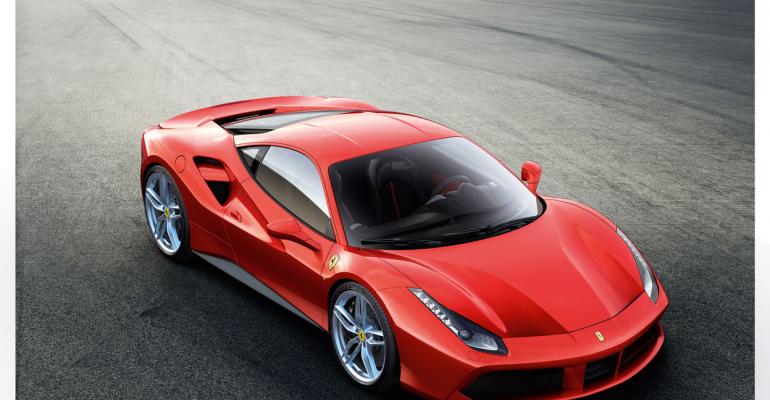 The supercar this year will replace the Ferrari 458 Italia and continues a tradition that originated in 1975 with the Ferrari 308 GTB, the automaker&rsquo;s first mid-engine V-8.

TURIN – Forgoing the suspense and expectation surrounding new-car unveilings, Ferrari takes the wraps off its all-new 488 GTB one month ahead of the first press day of the Geneva auto show.

The 488 GTB (for Gran Turismo Berlinetta) this year will replace the Ferrari 458 Italia and continues a tradition that originated at the 1975 show with the Ferrari 308 GTB, the automaker’s first mid-engine V-8, that replaced the V-6 Dino.

As the successor to the Ferrari 458 Italia, the 488 GTB’s most direct rival remains the aspirated V-10 Lamborghini Huracan.

The 488 GTB’s design is credited to the Ferrari Styling Center directed by Flavio Manzoni and is noteworthy for combining freshness with the FCA-owned supercar marque’s strong iconic character.

The new Ferrari’s sculptural flanks are the key to its character.

Its large signature air-intake scallop, a nod to the 308 GTB, is divided into two sections. The wide front spoiler’s double profile improves the thermal efficiency of the radiators positioned at the sides. At the center two pylons are combined with a deflector that channels air toward the flat underbody.

The broad, low tail also emphasizes aerodynamics, including an innovative blown spoiler that generates downforce without increasing drag. This works in conjunction with an aggressive ramp angle for the diffuser that features active flaps. The greater height required for the diffuser is achieved by repositioning the exhaust tailpipes.

Inside the cockpit there are more improvements than innovations. The new satellite control clusters are better integrated, with angled air vents and instrument panel enhancing the feeling that the cockpit is tailored around the driver who, considering the potency of this new thoroughbred must always be in full control via the multifunctional steering wheel.

Ferrari Could Be Safety Valve in Fiat-Chrysler Investment Plans
Sep 19, 2014