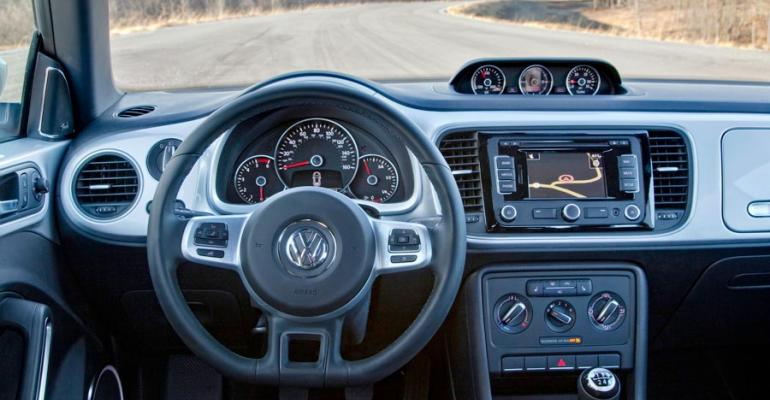 This is the second year WardsAuto has recognized outstanding interior designs, fit-and-finish and comfort by applying the same proven model used to select Ward&rsquo;s 10 Best Engines.

The WardsAuto editorial staff selected the 10 winners from a field of 40 vehicles with new or significantly improved interiors. There was no price cap on entries.

The winners in alphabetical order:

“We saw a tremendously diverse group of interiors this year, and it’s obvious to us that auto makers are pushing their design staffs harder than ever for interiors that are beautifully appointed, well-equipped and extremely comfortable,” says WardsAuto World Editor-in-Chief Drew Winter.

“There are too many great interiors in the market for any auto maker to think it can stand pat with its current interior offerings and remain successful,” he says. “Based on some of the vehicles we have seen at recent auto shows, we can tell the competition among interiors will be fierce in the next few years.”

Without question, luxury vehicles dominated this year’s competition with 13 entries, more than any other class.

The Audi A7, Chrysler 300 Luxury, Hyundai Azera, Range Rover Evoque and Infiniti JX35 were singled out for their spectacular design and value.

The A7 won over the editors with interior styling that manages to be every bit as dramatic and inviting as the sheet metal. The 4-passenger luxury liftback tilts toward the exotic and looks much more expensive than its $67,430 sticker price.

The Chrysler 300 Luxury Series ($44,855) demonstrates the success that can be achieved when two auto makers work in true collaboration. The 300 was new for North America last year, and the Fiat-owned Lancia brand got the opportunity to adapt the 300C for the European market.

The result is the Lancia Thema, and Chrysler executives liked the car so much they decided to sell it in the U.S. as the 300 Luxury Series. The tan-and-brown color scheme is punctuated by Poltrona Frau leather and deep-grained satin-finish wood on the doors, dash and center console. If Bentley sold an affordable family sedan, it would look like the 300 Luxury.

The previous-generation Hyundai Azera was a decent car, but it lacked style. The all-new Azera corrects that shortcoming. It hails from the Hyundai design studios with flash, sizzle, substance and proof there is no substitute for premium materials.

The Azera serves notice to luxury brands everywhere that Hyundai aspires to be known for much more than great value. That metric is covered as well: Our Azera tester stickered at $36,875 with heated and cooled front seats, panoramic roof and motorized rear privacy shade.

It’s easy to see why the all-new $49,745 Range Rover Evoque won North American Truck of the Year honors for 2012. Its 5-passenger versatility and no-nonsense premium appointments make the Evoque an ideal complement for a brand known for extreme off-roading.

Being both luxurious and rugged would seem to be extremely difficult, but Land Rover makes it look easy with the new Range Rover Evoque.

The Infiniti JX35 carries over and improves on the vibrant interior design language that came with the M sedan a few years ago and in the QX SUV last year. We find the JX to be an ideal blend of premium wood, sumptuous leather and judiciously applied brushed aluminum trim. The entire interior feels meticulously crafted.

And the JX’s value proposition is tremendous: $54,800 for a stylish, well-appointed 7-passenger cross/utility vehicle that still feels remarkably car-like and has a panoramic roof that fills the cabin with natural light. Climbing into the third row is no trouble, thanks to the ingenious sliding, folding-clamshell second-row seats.

The Dodge Dart takes the place of the forgettable Caliber and gives Chrysler a legitimate shot at gaining market share in the compact-car segment, and a stylish, well-conceived and heavily contented interior boosts prospects for success.

All for $21,485, the Dart includes a heated steering wheel, aggressively bolstered front seats, Nappa leather, navigation, dual-zone climate control and a 7-in. (18-cm) display that, unlike those on the more expensive Chrysler 300 sedan and Dodge Durango SUV, is reconfigurable.

Chrysler is one of two auto makers winning two Ward’s 10 Best Interiors trophies this year. The other is Hyundai, which gains recognition for the Accent interior after the subcompact’s 1.6L Gamma engine won a Ward’s 10 Best Engines award just a few months ago.

The Accent arrived with a $15,925 sticker, which we double-checked for a typo because this interior shows incredible attention to detail, with a leather-wrapped steering wheel, swooping lines on the instrument panel and many of the Hyundai-family center-stack elements that have made interiors such as the Elantra, Veloster and Sonata so appealing.

Another small car that brings a new level of style to the subcompact segment is the Chevrolet Sonic, which maximizes its limited space with two gloveboxes, storage bins on either side of the center stack, a bottle holder in each front door and three cupholders between the two front seats.

The well-equipped $18,745 Sonic proves an inexpensive car does not have to look cheap. The gear-shaped tachometer and asymmetrical cluster over the steering wheel communicates all the vital information the driver needs, and does it with flair.

Mazda enters the compact CUV market with the CX-5, and WardsAuto editors embrace its restrained, straightforward interior approach to a segment that, for many buyers, takes the place of a minivan as the utilitarian vehicle of choice for young families.

The CX-5’s seats are perforated to stay cooler on hot days, and the back seats fold flat with amazing ease, released by a tab on the seat or a lever in the cargo area. But it’s more than function: Bright metallic trim around the instrument cluster gives the $30,415 CX-5 an upscale feel, as do the brushed metallic radio and climate-control knobs.

Last but certainly not least is the redesigned Volkswagen Beetle, which loses the flower vase but is bound to gain more customers with the right mix of contemporary technology and familiar aspects that pay tribute to decades of the iconic Bug.

The blazing red trim that consumes the door panels and dashboard also matches the exterior body color, which creates a sense of design harmony. Simple touches make the $25,195 Beetle unique, such as the elastic-band map pocket on the lower door panel. And the vinyl loop hanging from the B-pillar is a brilliant throwback to the days before spring-loaded grab handles.

This is the second year WardsAuto has recognized outstanding interior designs, fit-and-finish and comfort by applying the same proven model used to select Ward’s 10 Best Engines.

Until 2011, the competition had been known as Interior of the Year. There is no ranking within the Ward’s 10 Best Interiors. In other words, there is no No.1, 2 or 10.

Other criteria used by WardsAuto editors in scoring and ranking all 40 nominated interiors are ergonomics, safety, material selection, overall value and aesthetics. In addition, judges rated each interior’s human-machine interface in determining how effectively vehicle information is communicated to the driver.

The 2012 interior winners will be honored in a ceremony at this year’s WardsAuto Interiors Conference, to be held May 17 at The Henry hotel in Dearborn, MI.

An extensive package profiling the winners in more detail will appear April 30 on WardsAuto.com and in the May issue of Ward’s AutoWorld magazine.