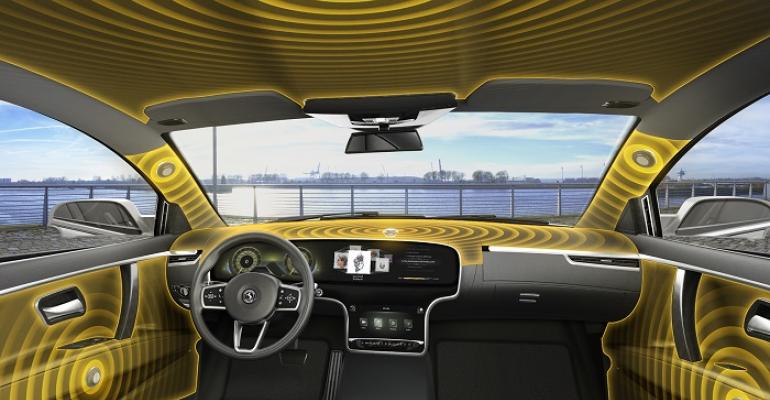 <p><strong>Conti places actuators in door panels, A pillars, atop instrument panel and in ceiling.</strong></p>
Technology

The German supplier has devised a way to take as much as 90% of the weight out of a traditional audio system.

While seats get a lot of the focus when talk turns to lightweighting interiors, other elements in the cabin can be portly, too.

Take for instance the audio system. Alone one speaker is not too hefty, but six speakers with chunky magnets – a common setup in the average mass-market sedan – can account for 55 lbs. (25 kg) of added curb weight.

A 12-speaker setup, common in most luxury sedans, weighs in at a not too-lean 88 lbs. (40 kg), Continental estimates.

Armed with this knowledge, the German supplier has devised a way to take as much as 90% of the weight out of a traditional audio system, which includes at least one amplifier as well.

The Tier 1 supplier is proposing swapping speakers for actuators, a device similar to a speaker’s core that is the size of a small cookie.

It’s the same idea behind Honda’s in-bed audio system in the Ridgeline compact pickup, as well as the in-headliner exciters of the defunct Toyota FJ Cruiser SUV.

But unlike those systems which supplement traditional speakers, Continental wants to take the idea further and aims for replacement of speakers with actuators.

“We are using the entire interior to create the sound – basically using all potential elements which we find in the cabin in order to create that sound experience the customer expects,” Hiebl tells WardsAuto in an interview.

By placing actuators in the A-pillars (best for transmitting high frequencies), ceiling (good for low frequencies), atop the instrument panel and sometimes in the door modules (good for medium frequencies, but depending on its height an arm rested on a door could muffle sound) Continental says it is able to create an auditory experience akin to being in a large room or music hall.

Other possible surfaces that could be used as pseudo speakers include the windshield and, as Honda is doing in the Ridgeline bed, plastic shielding in the rear of a vehicle, says Lars Schultheiss, vice president-product management and sales in the infotainment and connectivity unit.

“And then we are experimenting to use other elements maybe outside of the cabin to create some special effects,” he says.

Hiebl says no special interior trim materials are required, as those in use today exhibit good permeability and sound conductivity.

“What is used today (will work), with some modifications to make for the mounting points of those actuators,” he says.

While the weight savings may be greater for high-end systems, and new technology typically debuts in the priciest cars and light trucks, Continental does not see premium vehicles as the likeliest candidates for the actuator-based speaker system, at least not initially.

With a dozen or more speakers and the cachet of brand names such as Mark Levinson, Burmester and Bang & Olufsen creating them, audio systems available in premium vehicles can be as much a reason for purchase as engine specifications.

Says Schultheiss: “The more you pay, the more loudspeakers you want to get. Whether that’s directly relating to sound quality? Probably, but (it is) not a 1:1 relation. But if you’re like me you want to know how many watts does it have and how many loudspeakers, and then I pay $2,000 or $3,000 (more for high-end audio). And here we are going against that paradigm a bit.”

He describes the likeliest initial segment for the actuator-based speakers as “high-quality, middle-end” vehicles.

While the supplier’s actuator-based audio system, officially known as Ac2ated Sound, hasn’t yet been tested on audiophiles, Continental has invited “sound experts” to listen, including Martin Schleske, a German “master luthier” (violin maker). The verdict? “The system is really up to the same level of the high-end systems,” Hiebl says of the experts’ conclusions.

The supplier says side benefits of the actuator-based system is it draws less power than traditional speakers – making it perfect for electrified vehicles – and it frees up space currently occupied by speakers. The latter advantage opens up more areas for storage or gives interior designers more opportunity to let their imaginations run wild.

While it may seem like a relatively simple technology to implement, both men say it will take at least a few more years to bring to market.

Continental is in the “first, really intense proof-of-concept phase with one OEM,” Hiebl says.

“It takes a lot of engineering and measurement for the right placement of the actuators in the cabin,” he says. “Let’s be realistic. Still some ground work has to be done.”

Finding the proper placement of the actuators may be why such audio systems haven’t taken off on a scale beyond the one-off applications in the Ridgeline and FJ Cruiser, he surmises.

Schultheiss says the shift toward a larger-scale actuator-based system also will require a change in some job descriptions.

“Nobody that was designing interior panels was thinking of using that for sound creation, which departments are going to be involved and how much tuning will be necessary,” he says. “This is still something that we need to also find out, to be able to harvest those weight and space savings. It’s a little bit of unchartered territory.”

Continental plans to demonstrate the Ac2ated Sound system in January at CES in Las Vegas.