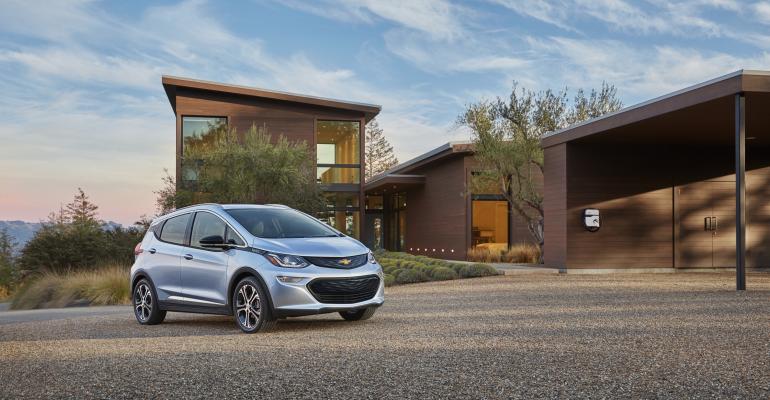 &ldquo;Not only are we expanding our product portfolio, we are expanding our business model,&rdquo; says Pam Fletcher, GM&rsquo;s leading electric-vehicle engineer.

Pam Fletcher, executive chief engineer for electric vehicles at General Motors, confirms a year-end production start for the ’17 Chevrolet Bolt, a car the automaker increasingly casts as emblematic of its new business model rather than an answer to startup rival and Wall Street darling Tesla.

“We have Bolts rolling off the assembly line today, with retail production on track for the end of the year,” Fletcher tells the Citi Global Technology Conference in New York this week. “We’re living up to our commitment to bring the Bolt to life by the end of the year.

“It’s a bit gut-wrenching,” she admits of the rollout, “but it’s exciting and its here.”

GM unveiled the Bolt EV as a concept car in 2015, promising more than 200 miles (322 km) of range and a price tag under $30,000 when federal and state zero-emissions incentives are applied. It will go a long way in helping GM meet tightening fuel-economy and emissions standards, as less-efficient trucks continue to dominate its sales mix. Including CUVs, trucks account for 70.1% of the automaker’s sales so far this year, according to WardsAuto data.

However, the Bolt’s introduction also serves as a retort to Tesla, which at the time was selling the Model S with a 200-mile range and $70,000 sticker price. Tesla since has announced a more affordable model, the Model 3, to compete with the Bolt and continues to draw greater favor from investors than does GM.

Fletcher suggests the Bolt epitomizes GM’s metamorphosis from an old-line manufacturing goliath into a Silicon Valley-like developer and builder of highly connected products and new mobility services, such as EVs, car-sharing, ride-sharing and ride-hailing.

Fletcher says since the its inception the Bolt has been considered a pivotal piece in GM’s leap into mobility services, an initiative where the Detroit automaker so far has spent $1.4 billion through its investments in the ride-hailing service Lyft and technology company Cruise Automation. Lyft is the No.2 ride-hailing service in the U.S. behind Uber and Cruise Automation is seen accelerating GM’s autonomous-vehicle development, the ultimate prize in mobility services.

The automaker also is deploying its newly formed Maven unit across the U.S., which operates in five metropolitan areas and has eclipsed 9 million (14.5 million km) car-sharing miles. Maven cars also are available to Lyft drivers in those cities, as well as two other metro locations. GM additionally is testing ride-sharing programs on its global R&D campuses and running CarUnity, a peer-to-peer sharing service in Germany.

The Bolt fits perfectly into those mobility services spaces, Fletcher says, because it seats five people comfortably, offers lots of cargo space for weekenders and day trippers, its footprint is relatively small and its smooth, quiet electric propulsion is ideal for urban areas.

“It’s (a) perfect cocoon to go about town in, so we really think that this is the right recipe, not only for the consumer but also ride-sharing,” Fletcher says.

A flat floor, as opposed to sills with a step-over in a traditional vehicle, make it easier to get in and out of, too, so it is good for running errands, she adds.

The Bolt is among GM’s most highly connected vehicles with advanced driver-assist technologies, built-in Wi-Fi and a quick smartphone linkup so owners can use a Bolt app to manage vehicle functions. The same technology could allow car-sharers and ride-hailers to locate and reserve a vehicle or request a lift.

That same connectivity underpins GM’s drive toward autonomous vehicles, which someday soon could see a driverless Bolt arrive via Lyft to a person’s doorstep for a trip to the market or the airport.

Fletcher calls Cruise Automation “a talented team of software engineers creating the algorithms and code to bring full autonomy to life and deliver autonomous technology in an on-demand ride-sharing service.”

But EVs require lengthy charge durations, which some experts think could reduce important utilization time in shared fleets. Using advanced DC fast-charging, the Bolt’s battery will gain 90 miles (145 km) in 30 minutes. A full charge from empty to more than 200 miles would take upwards of 10 hours, using a 240V wall box.

“Charge times are never short enough, but if you look at the way people use the cars, even in the shared space, the charge times do not become so onerous,” Fletcher says, arguing average speeds in the shared space are low, so complete battery depletion is rare. Routes also are fixed, so operators can manage charging effectively.

“We feel very confident about the Bolt’s range, and the charging technologies on board, to satisfy (user) requirements,” she says.

Fletcher also says the Bolt will launch GM’s greatest capability to perform over-the-air updates, where vehicle software can be tweaked remotely to improve safety or otherwise enhance the customer experience. However, she declines to offer specifics, and also keeps the lid on future M&A possibilities to further speed GM’s work in new mobility services by saying the automaker already boasts connectivity, manufacturing capability and capacity, an on-demand transportation network and autonomous technologies.

“We think we are better positioned than anyone else to deliver,” she says.