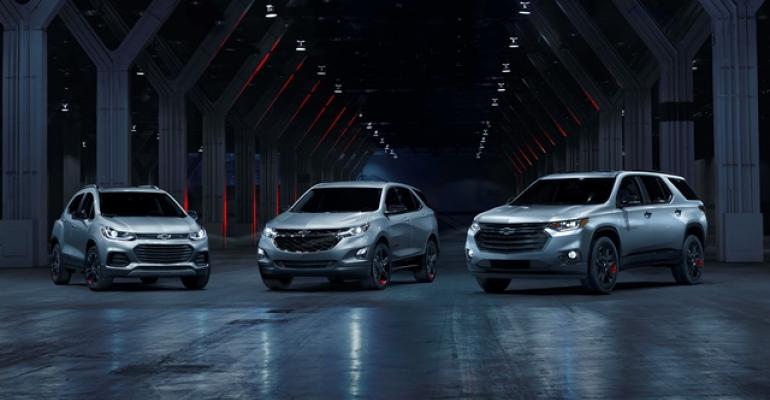 According to a forecast from WardsAuto and its partner AutoForecastSolutions, the 2-row Blazer would use the same platform as the 3-row Traverse.

DETROIT – General Motors is expected to bring an all-new midsize Chevrolet CUV to market in the U.S. next year tentatively called the Blazer and slotting beneath its flagship Traverse, as the automaker works to answer a seemingly insatiable consumer demand for the products.

According to a forecast from WardsAuto and its partner AutoForecastSolutions, the 2-row Blazer would seat five passengers and use the same platform as the 3-row Traverse. However, it more closely would resemble in size the GMC Acadia, which offers an All-Terrain variant with two rows, and the 5-passenger Cadillac XT5.

The Blazer would give shoppers the flexibility to buy a larger CUV without paying a premium for 7- or 8-passenger seating a third row provides. The Blazer’s primary competition would be the Ford Edge and it would be built at GM’s Ramos Arizpe, Mexico, assembly plant.

Steve Majoros, director-marketing for cars and crossovers at Chevrolet, declines to confirm the addition, which would give the brand a commanding five CUVs in the market to complement two truck-based SUVs.

“We have a pretty good lineup right now,” Majoros tells WardsAuto on the sidelines of an event here showcasing the redesigned ’17 Chevy Equinox, a 2-row CUV occupying the heart of the segment. “But never say never. We are looking at other opportunities and (Blazer) would make some sense.”

Even in today’s CUV-crazy market, which experts do not see cooling anytime soon, Majoros says a key question behind adding another CUV to the Chevy lineup would be how thinly the brand dares to slice the segment at the risk of cannibalizing sales from existing entries. In the case of the Blazer, sales of the red-hot Traverse and Equinox would be at stake.

The Traverse and Equinox last year accounted for a combined 358,896 deliveries in the U.S., according to WardsAuto data. That could give evidence that room exists for something additional.

“There might be a niche possibility,” says Michelle Krebs, an industry analyst with Kelley Blue Book, a consumer car-buying guide.

But she warns against getting too aggressive in the segment, because additional entries likely would require some separation from a styling perspective and the segment has seen great success because it has largely played it down the middle.

“Crossovers are a lot like minivans, if you stray from the norm you don’t do well,” she says. “There is a formula that is a winner, and research has shown that design is not big reason for purchase in this segment.”

Consumer tastes are evolving in the segment as more nontraditional buyers snap up CUVs. At one time, the segment was dominated by Baby Boomers downsizing from large SUVs or large cars. But their purchasing activity in the segment is declining, while the number of Gen X and Millennial CUV buyers is rising sharply, Krebs says.

But personalization is becoming more important, too, Majoros says.

“It’s becoming less about size and more about purpose,” he offers.

Majoros says today’s CUV buyers really want to know what role the vehicle fills for them.

Chevy addresses that question later this year with a trio of Redline special edition variants for the compact Trax and Equinox and Traverse, which adds eye-catching items such as blacked-out wheels, grilles and nameplates.

But special editions may not be enough for a segment that last year saw CUVs hit a record volume of 5.624 million units, a 7.7% increase from last year. CUV market share grew to an all-time high 32.2% from 30.0%.

Honda also is expected to launch next year a short-wheelbase Pilot, which would have two rows of seating instead of three. Hyundai already offers the option on its popular Santa Fe, as do the Kia Sorento, Nissan Rogue and Dodge Journey.

The Blazer name for Chevy SUVs dates back to 1969.