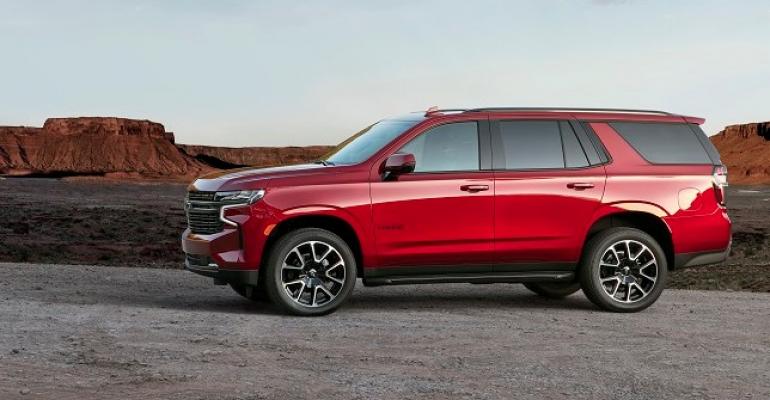 The Tahoe and Suburban are among the crown jewels of the GM portfolio for their profitability, family-pleasing capability and pop-culture notoriety. The pair combined for 145,636 sales last year for a whopping 40.9% of the segment.

DETROIT – General Motors unveils the redesigned 2021 Chevrolet Tahoe and Suburban, a pair of segment-dominating and highly profitable SUVs to feature for the first time a diesel engine option and an independent rear suspension with available adaptive air suspension and fourth-generation magnetorheological damping.

“This is taking it to another level,” GM Chairman and CEO Mary Barra tells Wards after the trucks were unveiled here. “When you look at the fuel efficiency, cargo storage, the focus on the customer seating, the technology, the safety – every single dimension of these vehicles have been improved.”

Along with the big pickups, the Tahoe and Suburban are among the crown jewels of the GM portfolio for their profitability, family-pleasing capability and pop-culture notoriety. The pair combined for 145,636 sales last year and a whopping 40.9% of the segment, according to Wards Intelligence. Including the GMC Yukon, GMC Yukon XL and Cadillac Escalade, which share the new architecture and will be revealed later, GM controls more than 70% of the segment.

Sticker prices are envied by the industry. According to pricing expert ALG, average transaction prices for the Tahoe and Suburban last month stood at $57,414 and $61,246, respectively, trailing only the Expedition among the volume big SUVs. Profit margins are consequently large, generally considered around 20%. That’s two times, or more, profitable than other GM vehicles.

The role the Suburban has played in pop culture was cemented earlier this month with a star on the Hollywood Walk of Fame.

But crosstown rival Ford has a new Expedition on the market gaining traction, as well as a new luxury Navigator large SUV receiving overwhelmingly positive reviews, so it is critical GM brings competitive comfort, convenience and driving dynamics to the Tahoe and Suburban. The automaker arguably missed slightly with Silverado and Sierra pickups relative to the also newly redesigned Ram 1500 and Ford F-150.

“With an increasing number of SUVs on the market, we knew the all-new Tahoe and Suburban needed to reach higher than ever,” says Tim Herrick, vice president, global product programs.

“We transformed Tahoe and Suburban to offer all-new technologies and features and deliver a better driving experience, while staying true to the versatility and capability that have earned people’s trust for generations,” he says in a statement ahead of the reveal of the trucks, which are based on an all-new architecture also underpinning the automaker’s light-duty and heavy-duty pickups.

The headliner for the new Tahoe and Suburban may be the independent rear suspension, a technology it has lacked as competitors have moved to the setup. In addition to a comfortable ride, the IRS opens rear cargo space. In the Tahoe, storage space improves a whopping 66% behind the second row and 19% behind the first row of the Suburban. The air suspension available on top-trim models levels the trucks at all four corners and offers up to 4 ins. (102 mm) of adjustable ride height. 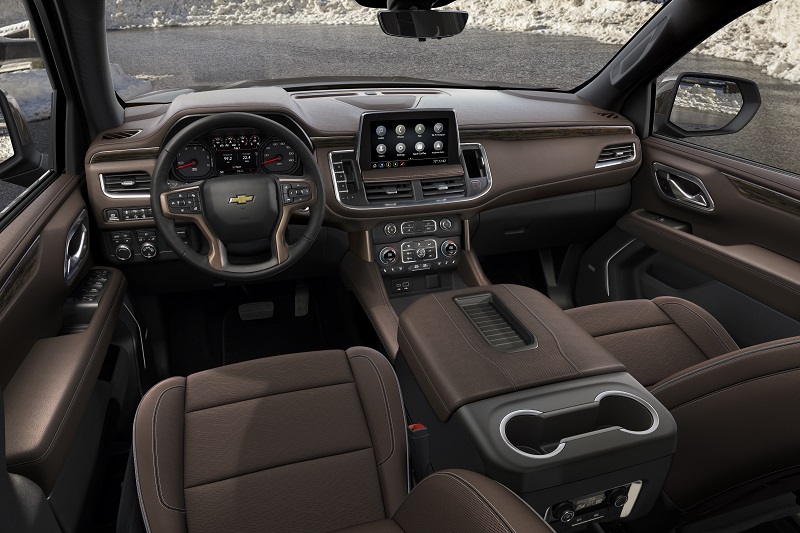 “I think the most impressive aspect of the all-new Tahoe and Suburban is how well they handle,” Herrick says. “Despite being big, they offer responsive, confidence-inspiring handling that will change expectations for the full-size SUV driving experience.”

Engine options include updated versions of GM’s 420-hp 6.2L and 355-hp 5.3L small-block V-8 engines with fuel-saving cylinder deactivation, but also an all-new 3.0L inline 6-cyl. turbocharged diesel rated at 277 hp and 460 lb.-ft. of torque. GM expects the diesel, which gets an EPA-rated 33 MPG (7.1 L/100 km) in the light-duty pickups, to give the trucks segment-leading fuel economy.

Each engine is mated to a 10-speed automatic transmission with electronic shift control, which removes the familiar GM steering-wheel column mounted shifter in favor of a push-button system on the dashboard immediately right of the instrument panel.

The Tahoe and Suburban will offer 30 safety and driver assistance technologies as standard or optional equipment, including the first application of full stop-and-go adaptive cruise control, which benefits from one of the first applications of GM’s new digital vehicle platform. The electronic architecture’s processing speed is five times faster than its predecessor and enables items such as a high definition, faster acting 10-in. (25.4 cm) color infotainment screen.

It’s one of five connected and configurable screens offered, including a 15-in. (38.1 cm) diagonal head-up display, and an

The two trucks are larger, with the Tahoe making the biggest leap with a wheelbase that is 4 ins. (102 mm) longer than the previous-generation model. Notably, the trucks offer 10% greater third-row legroom. Exterior dimensions are bolder, more confident and GM asserts segment-leading comfort according to its benchmarks.

The Tahoe and Suburban begin arriving at U.S. dealers in mid-2020 with other regions to follow. Pricing and fuel economy estimates will come closer to the on-sale date. The trucks are exclusively built at GM’s Arlington, TX, assembly plant, which underwent a $1.4 billion renovation to accommodate their production. 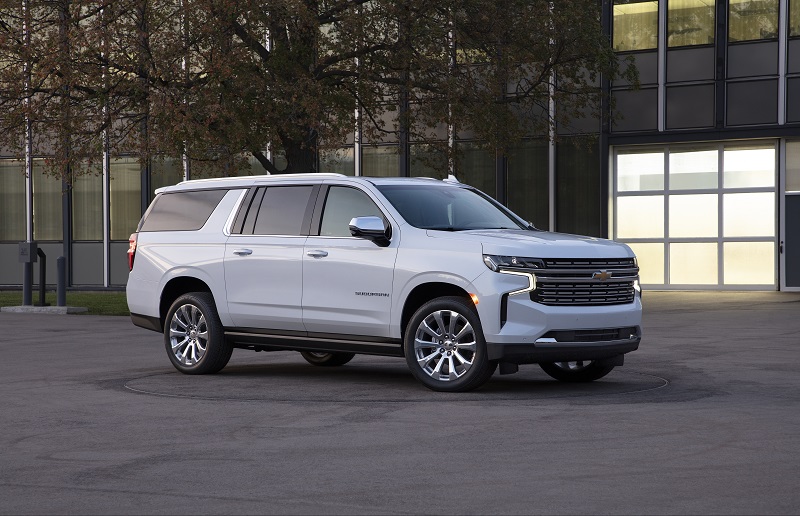