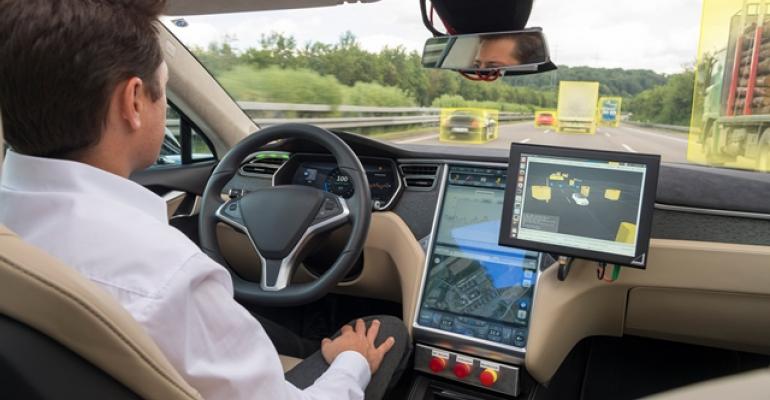 The supplier intends to be a leader in the segment by creating a brain for autonomous vehicles capable of collecting and processing three times as much information per second as the human brain.

BOXBERG, Germany – Robert Bosch recently sold its 10 millionth radar unit, a fundamental ingredient of autonomous and advanced driver-assistance systems, but that represents just the tip of the iceberg when it comes to the global supplier’s ambitions for self-driving cars.

Harald Kröger, president-Automotive Electronics, says the supplier intends to be a leader in the segment by creating a brain for autonomous vehicles capable of collecting and processing, in a split second, three times the information as the human brain through the use of artificial intelligence and deep learning.

“A car equipped with artificial intelligence will not only react faster than any human, but also drive more defensively,” Kröger says during remarks here ahead of a deep dive into the global supplier’s vast automotive product portfolio that includes a growing suite of ADAS and autonomous technology.

“It makes the roads in our urban areas safer – for pedestrians, cyclists, and, not least, for the occupants of vehicles. Our development goal is clear: Bosch wants to make cars smart,” he says.

Bosch is not alone. AlixPartners, a global consultancy, says more than 50 big-name companies are working on autonomous driving and many of them boast deep war chests. It characterizes competition in the segment as the “Wild West,” with expectations for only a handful of winners and many disappointed investors.

However, Stuttgart, Germany-based Bosch was as fast out of the gates in self-driving R&D as anyone. The supplier has a group of 3,000 employees working on automated driving and earlier this year struck an alliance with longtime customer Daimler to put self-driving cars on public streets. A first step in that partnership occurred July 17 with the launch of an automated valet parking service at the Mercedes-Benz Museum in Stuttgart.

Driver-assistance systems have become big business for Bosch, too. Sales in the segment surpassed €1 billion ($1.17 billion) last year and orders for the technologies were taken worth €3.5 billion ($4.1 billion), Kröger reports. The supplier expects already sizzling sales of its radar sensors will grow another 60% this year, and of those, video sensors by 80%.

Extending in AI, the central building block of the car’s future brain, Bosch will invest €300 million ($349 million) into the Bosch Center for Artificial Intelligence over the next five years, Kröger says. The center will employ about 100 experts at locations in Bengaluru, India; Palo Alto, CA; Renningen, Germany. Bosch expects its first AI onboard computer to go into production by the beginning of the next decade.

“Automated driving saves lives, since it makes our roads safer, and artificial intelligence is the key to making it work,” Kröger adds.

Kröger says many of today’s cars and trucks already can identify other vehicles on the road, as well as pedestrians, cyclists, scooters, traffic signs and other objects populating the transportation infrastructure. But autonomous systems also will have to make predictions about certain scenarios, such as whether a ball bouncing into the roadway ahead will be chased by a boy nearby and whether the vehicle should be slowed in anticipation.

“Cars have to be capable of more than perceiving and understanding their surroundings,” Kröger says. “They also have to learn to anticipate, to guess what is most likely to happen next.”

Detailed sensor data from radars and video must be merged to enhance the decision-making expertise of AI. High-resolution maps also must be kept constantly up to date, an undertaking Bosch is pursuing with partners such as TomTom, a Dutch provider of maps and traffic information.

“Our vision of the future is that vehicles should use sensor data to keep the cloud-based digital map constantly up to date,” Kröger says.

“We want to create an open standard for this. The empirical knowledge we have gathered suggests that keeping a high-resolution map up to date for freeways in Europe, North America and Asia Pacific will require fleets of around 1 million vehicles each,” he says.

Bosch thinks its partnership with TomTom already has reached an important milestone in that area with their road-radar signature technology, which draws on sensor data to accurately positon the car in its surroundings to within centimeters and in good or poor weather conditions.

By the next decade, the first cars using road-radar signature will appear in Europe and the U.S.

The Bosch AI computer coming by 2020 will allow a vehicle to crunch a myriad of data, upwards of 30 trillion floating-point operations per second, or three times as many as the human brain. The AI system will learn more with every new situation it encounters, too, and experts inside the supplier’s laboratories will check whether the learnings occurred correctly.

“Our objective is accident-free driving,” Kröger says, recalling the Vision Zero initiative of governments and industries for a highway system free of traffic-related fatalities and injuries. “The key to achieving this is our AI onboard computer. It will help make the roads in our megacities significantly safer.”