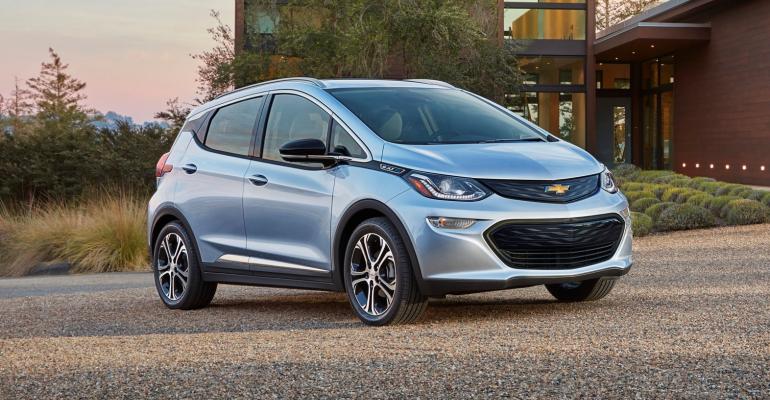 SEOUL – Stuart Norris could call himself the father of the all-new Chevrolet Bolt. But he says that would be unfair to the 180-employee team who worked with him to create the much-anticipated long-range electric vehicle.

“Developing the Bolt EV in three-and-a-half years is pretty amazing,” the U.K. native, who arrived in Korea in the fall of 2012 to start laying the groundwork for the Bolt’s design, tells WardsAuto on the sidelines at the recent Seoul auto show.

Norris, managing director-design for GM Korea, also extends for the Bolt to LG Electronics, which worked hand-in-hand with GM Korea and in the U.S. on the battery and battery pack development. He also credits GM engineers and designers in the U.S. and Europe who had input into creating the Bolt.

The former Jaguar designer says GM’s global strengths benefited the team in terms of design, technical and customer-relations experience with four generations of electric vehicles. But Norris also notes working globally has some offsetting inconveniences, too.

“It’s quite challenging when you design in Korea and launch production in Lake Orion, Michigan,” Norris notes. “There’s a 13- or 14-hour time difference, different languages (except for himself and one Japanese-Brazilian designer who does not speak Korean, all members of the design studio are Korean), and different geography. But we get a massive wealth of knowledge from the global organization.”

The Bolt team combined both interior and exterior design duties from the outset. “We used to separate exterior and interior design, but we decided to merge the two,” Norris says.

“We were given very wide responsibility to design both the interior and exterior, including colors, materials, user interface. We strove to keep every part of it unique.

“We wanted to create proportions for the vehicle as a future state of the family car; how the Bolt EV would fit into family life.

“We pushed the windshield as far forward as we could, and lowered the beltline to maximize all-around visibility.”

Indeed, sitting in the driver or front passenger seat, the view forward and to both sides is wide open, imparting a feeling of security.

By pushing the wheels to the furthest corners, the team was able to provide a highly stable vehicle with maximum inner proportions, Norris says. “The interior has a really unique feel. There’s a very spacious, open feeling inside the car. Every time you get into it to drive it feels very different from the typical car.”

The Bolt’s battery pack extends from the rear of the front wheels back to the rear axle, providing a voluminous, flat base for the floor. Norris says this feature enabled the team to develop “C-segment spaciousness in a car with a B-segment exterior.”

Inside the vehicle, the 6-ft., 2-in. (188-cm) Norris sits comfortably in the passenger seat without stooping as he points out details.

“We took advantage of electrification of the vehicle to develop this very low, flat floor, giving us a really open-space feeling,” he says.

The team developed a unique center stack that holds all instrumentation; there is no instrument-panel overhang or clutter of control knobs or switches.  All controls are integrated into a 10.2-in. (26-cm) touchscreen unique to the Bolt.

Instead of a mechanically connected shifter, the team elected to incorporate a precision electronic shifter.

Norris says everything about Bolt’s interior seems unique – different, but comfortable, and with outstanding visibility.

“What’s great about the Bolt EV is that, as we bring the price down it will have very wide market appeal,” Norris says. “The styling is very on point to where the market is going and it has a 235-mile (378-km) range” when fully charged.

“All these things are bringing down the barriers to ownership.”

Norris joined GM at its Warren, MI, tech center in 2004 after spending seven years with Jaguar. He came to Korea in October 2012 specifically to work on the Bolt.

“We were doing preliminary architecture work for the vehicle, defining what we wanted it to be, and eventually our show car debuted in Detroit in January 2015,” he says. “Then last January it was revealed at the Consumer Electronics Show in Las Vegas.”

Along the way, Norris in the summer of 2015 was promoted to managing director of design in charge of GM Korea’s vehicle-design center in Bupyeong, where all but two of the staff members are native-born Koreans.

With revisions and other work contuning the amount of time Norris personally spends on the Bolt EV “kind of comes and goes,” he says.

But in 2015 and 2016, Norris recalls, “one hundred and twenty percent of my time was spent working on the Bolt EV.”

The Bolt is making its commercial debut in Korea, albeit only 400 units initially are being distributed to winners of a lottery draw held among the few thousand applicants who had completed orders. Bolt sales have just begun in the U.S.