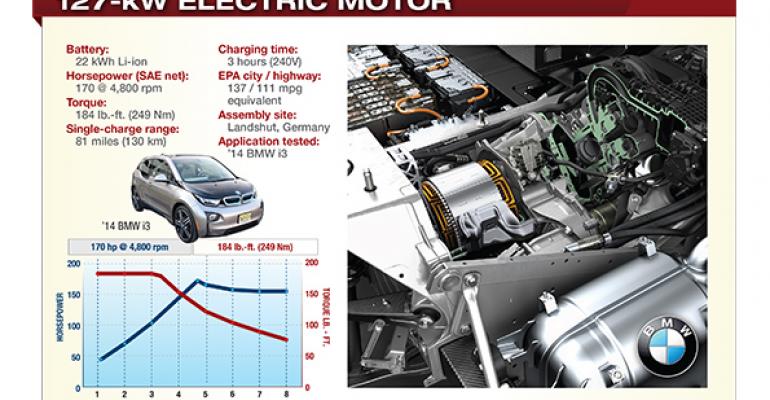 The i3 is purpose-designed to provide something approaching BMW performance and handling, along with ultra-high efficiency.

Ward’s 10 Best Engines competition has recognized outstanding powertrains for 21 years. This installment of the 2015 Behind the 10 Best Engines series looks at the development of BMW’s groundbreaking i3 electric car.

Say you're a prestige German automaker known for high-performance, driver-oriented vehicles, and you're required by U.S. and European regulations to dramatically improve your fleet fuel efficiency and carbon dioxide emissions each year for the next decade. What would you do?

Like every other OEM these days, you would downsize, turbocharge and hybridize your powertrains as much as your discriminating, image-oriented customer base will allow. Plus you would create a battery-electric vehicle or two, in order to meet California’s stringent zero-emissions mandate.

But if you’re BMW, whose mantra has long been “Ultimate Driving Machines,” hoping to sell EVs in serious-enough numbers to offset a big stable of potent internal combustion engines, you'd best do it in a way that sufficiently supports the brand philosophy.

Unlike most EVs, with the exception of the Tesla Model S, the i3 is not a conversion of a conventional car. It is purpose-designed to provide something approaching BMW performance and handling, along with ultra-high efficiency. Skinny low-rolling-resistance tires and a lightweight carbon-fiber body shell help.

Its hybrid-synchronous motor is powered by a 22-kWh lithium-ion battery pack mounted close to its rear drive wheels for rear-wheel-drive traction and handling feel. Revving as high as 11,400 rpm, it generates a healthy 127 kW (170 hp) and 184 lb.-ft. (249 Nm) of torque.

“This is no ZEV compliance car,” WardsAuto editors write. “Instead, BMW has gone all-in with the i3, treating it not like a red-headed stepchild but the marvelous technological achievement it is. The 170-hp electric motor propels the spacious 4-seater with a free-wheeling simplicity that is uncommon among EVs, and it whirrs gently like George Jetson's space pod no matter how aggressively driven. Assertive regenerative braking lets you drive while rarely touching the brake pedal.”

Not all drivers love that always-there strong regen braking, however. Some would prefer to vary its strength depending on conditions (as in VW’s eGolf) or call it up as desired, as with the steering-wheel paddles on Cadillac’s ELR (and Chevy’s next-generation Volt).

Further setting the i3 apart from other BEVs, it tears a page out of the Volt playbook by offering an optional, off-the-shelf, 2-cyl. motorbike engine that extends its EPA-certified driving range to 150 miles (241 km) from the battery-only i3’s 81 miles (130 km). It adds 270 lbs. (123 kg) to curb weight and $3,850 to the base price. BMW is a major producer of motorcycles as well as cars.

WardsAuto editors tested both versions of the i3. The small 34-hp IC engine is mounted in back and moves the car’s weight distribution rearward, taking away some cargo capacity. It also can be heard when running, especially when driving at low speeds. It never drives the wheels. The gas tank is a tiny 1.9 gallons (7.2L). Its only role is to generate enough electricity for the battery to keep the i3 going another 60-70 miles beyond its battery-only range.

According to BMW i powertrain manager Dirk Abendroth, one key i3 design objective was a high power-to-weight ratio for BMW-style performance without having to tote around more battery than necessary for its primary role as a “megacity” car. “This is something that differentiates us very much from all other electric vehicles on the market,” he says.

Efficiency was a hugely important objective because of the limited energy on board, but so was achieving driving pleasure rivaling that of conventional BMW powertrains while using a simple single-speed gearbox. “We wanted very dynamic behavior,” Abendroth says, “so we needed a very wide range of torque and power across its operating range.”

One major challenge was keeping motor current low through both mechanical design and software. “We needed to keep the AC current as low as possible, especially at very high power levels. Otherwise you have losses and you lose efficiency.”

Key to all this is a new hybrid synchronous motor, the first electric motor completely designed and built by the BMW Group, that combines “two different principles of driving the machine…to achieve the sum of the two.

“One is the standard PSM (Permanent-Magnet Synchronous Motor) effect with e-fields in the stator that go around with the current, and the rotor simply follows that field. The second is a magnetostatic reluctant force.”

The biggest challenge was integrating these two effects into one motor design to optimize both performance and efficiency, Abendroth says.

Another was “intelligently” mounting the inverter directly onto the motor, without AC lines, to prevent electromagnetic compatibility issues, reduce weight and avoid large, complex connectors. Still another was making the motor (especially its rotor) as light as possible, yet as strong as necessary, to withstand all the forces within the machine.

“It took us a long time to figure out what was really necessary and what was not.”

Despite the intensive development work, there still is room in this innovative electric powertrain for much future improvement, Abendroth says.

“But we can manage that in a more complicated way to make it more sophisticated and more efficient. We also are thinking of a way to get rid of some permanent magnets, because the permanent magnets drive the cost. And we will be looking at the cooling system, which is always one of the limiting factors. There is really no dimension that will not be improved for the next generation.”

Abendroth concedes the team’s primary focus was on the electric propulsion system, while the range extender is an “add-on” that buyers can choose if they are concerned about lack of range or having no opportunity to recharge. And he implies it might go away someday if battery-only range significantly improves.