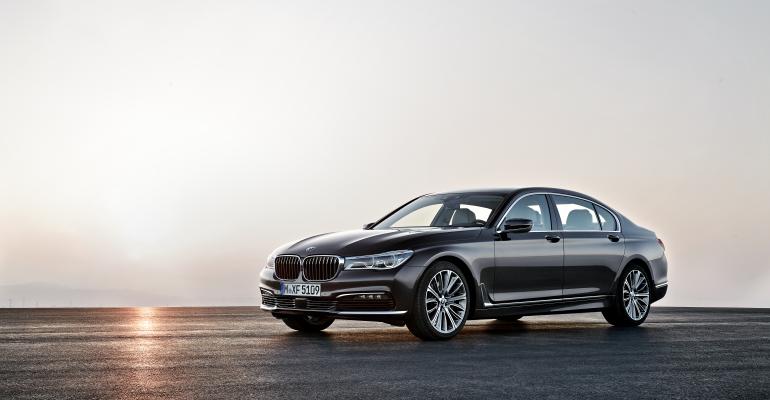 MUNICH – Bavarian pride is brimming as BMW rolls out the all-new sixth generation of its 7-Series sedan, a car that promises to be a technology showcase for lightweight materials, efficient powertrains and the ability to park itself with no one at the steering wheel.

The 7-Series represents BMW’s flagship model and always has been a test-bed for advanced technologies that became standard many years later in mainstream vehicles, such as antilock brakes and electronic engine-management computer (introduced with the first generation in 1978).

The previous 7-Series offered 10 variants, including two wheelbases, a diesel, hybrid, V-12, V-8 and I-6 and rear- or all-wheel drive.

At launch, the new car will come to the U.S. exclusively with the long wheelbase – 126.4 ins. (3,210 mm), same as before. This should not come as a surprise. Of the 10 variants offered previously, seven employed the long wheelbase. Some 90% of 7-Series buyers have chosen the LWB.

A short-wheelbase model is not planned for the U.S., nor is the diesel, but the V-12 will return to the 7-Series in the future, Klaus Frohlich, BMW board member in charge of R&D, tells WardsAuto here at the international unveiling of the car.

Both models to start will come available with either rear-wheel or all-wheel drive.

A new addition to the 7-Series lineup is the 740e xDrive plug-in hybrid, which also will be available in 2016, borrowing some of the eDrive powertrain technology applied to the i8 PHEV.

The 740e will use BMW’s 2.0L turbocharged gasoline engine (codename B48) and an electric drive unit integrated into the 8-speed Steptronic transmission. The electric motor draws its energy from a lithium-ion high-voltage battery housed underneath the rear seat. This will be the first 7-Series using a 4-cyl. engine.

The eDrive button on the center console lets the driver toggle through operating modes, from the default AUTO for spirited acceleration to MAX, which allows the sedan to run purely on electricity at speeds up to 75 mph (121 km/h) for a maximum range of 23 miles (37 km).

The driver also can pick Battery Control mode, which raises or maintains the high-voltage battery’s state of charge to conserve electricity. When route guidance is used, the car will calculate a trip-specific strategy for electric driving to conserve energy.

The 445-hp 4.4L V-8 (codename N63) under the hood of the 750i xDrive has been the workhorse at the upper end of the BMW portfolio for several years.

But this updated version has a higher compression ratio (10.5:1 vs. 10.0:1) and for the first time uses two twin-scroll turbochargers, cradled within the 90-degree V, each one incorporated into bank-specific exhaust manifolds made from thin-wall castings.

This reverse-flow layout has air entering the engine from outside the V, and BMW says the 4.4L represents the first production engine with intake manifolds partially integrated into the cylinder heads.

The result is maximized airflow and smaller packaging dimensions, combined with the latest versions of BMW’s patented Valvetronic and Double-VANOS cam timing.

The V-8 also uses a map-controlled coolant pump that can restrict flow by 10%, allowing the engine to warm up faster and reduce energy consumption and emissions.

Without significant boosts in output, combined with lower curb weight (by 190 lbs. [86 kg]), the new 7-Series should deliver improvements in fuel economy, but those estimates will not be available until closer to vehicle launch. BMW promises the updated I-6 will be both more efficient and responsive.

The turbocharged 6-cyl. engine features an indirect system of charge air cooling that is incorporated into the intake manifold and works in unison with high-precision direct fuel injection and, like the V-8, the latest versions of Valvetronic and Double-VANOS.

Structurally, the 7-Series carries forward the carbon-fiber reinforced plastic applied to the passenger cell of the i3 and i8, a strategy that reduces weight in the new sedan while increasing both overall torsional strength and bending stiffness.

A key difference, however, is the use of CFRP for the entire monocoque passenger cell for both the i3 and i8. The 7-Series uses carbon fiber, with strands spun at BMW's jointly owned plant in Moses Lake, WA, as roof rails and to reinforce aluminum or steel members in the B-pillars and the transmission tunnel.

BMW says the “Carbon Core” body makes the new 7-Series the first vehicle ever to use mass-produced CFRP in tandem with steel and aluminum.

Doors, fenders, hood and trunklid of the new 7-Series are made of aluminum. Lightweight design of the suspension, brakes and wheels reduces unsprung mass as much as 15%.

Altogether, these weight-reduction measures result in a lower center of gravity. BMW says it achieved the ideal 50:50 weight balance between the two axles.

A front and rear self-leveling air suspension powered by an electric compressor comes standard, as does electric power steering. On the previous 7, a rear air suspension was optional.

An active chassis control system is optional and designed to reduce rolling movements at the front and rear. The system also uses data from the navigation system to see ahead, helping the chassis respond to the road.

Other interesting or clever new features include: