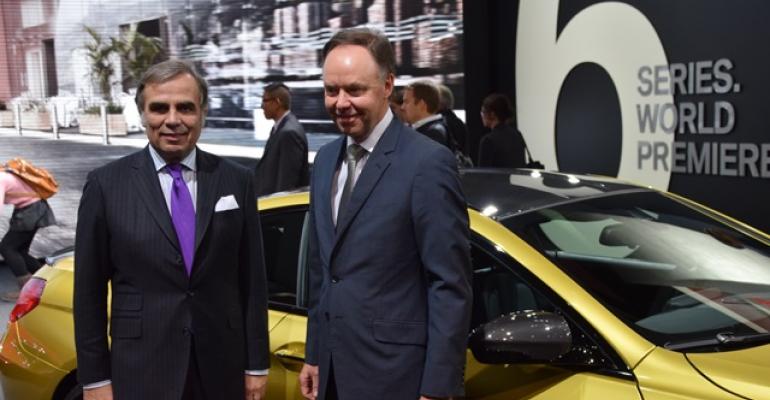 Prices are falling faster for gasoline than for diesel fuel, but that isn&rsquo;t discouraging BMW from keeping a steady course with diesels in the portfolio. The automaker also unveils a refreshed 6-Series in three body styles in Detroit.&nbsp;

DETROIT – Gasoline prices that have fallen dramatically in recent months are not forcing BMW to reconsider a product strategy that emphasizes diesel engines.

Last week, a gallon of regular unleaded in the U.S. cost an average $2.13, compared with $3.05 for a gallon of diesel, according to the U.S. Energy Information Admin. In many parts of the country, diesel prices have exceeded gasoline by more than $1.

Fans of diesel would prefer to see closer alignment between the fuel prices, but BMW of North America President and CEO Ludwig Willisch says the issue is not paramount.

“Gasoline prices have never played such a role for our customers. It’s not really decisive for our business,” he tells WardsAuto on the sidelines of the North American International Auto Show here.

Greater effect can be seen during wild market fluctuations on Wall Street, he says. “The general economic environment is much more important for our customers to decide what they buy.”

BMW offers smooth, clean-burning turbodiesels in the 3-, 5- and 7-Series sedans, as well as the X3 and X5 CUVs. The diesel vehicles are significantly less expensive and more fuel-efficient than their hybrid counterparts.

“We haven’t been shy introducing diesels,” Willisch says. “We are quite pleased with the X5 (diesel).”

“It is amazing that diesel is not more popular in the U.S. than it is because really it produces actually what the consumer in the U.S. should be looking for: range and acceleration, the torque,” he says. “Both (are) delivered by diesel in a wonderful way. In many cases, as far as fuel economy and emissions are concerned, it even beats hybrids.”

On the gasoline front, BMW’s newest 1.5L 3-cyl. engine is available in the Mini Cooper this year, and it earned a Ward’s 10 Best Engines trophy for 2015. A much more powerful 1.5L 3-cyl. appears in the plug-in hybrid BMW i8 sports car.

Either way, Willisch says he does not see any additional 3-cyl. engines joining the BMW portfolio in the U.S. anytime soon.

At this year’s NAIAS, BMW celebrates 40 years of marketing Ultimate Driving Machines in the U.S. with the worldwide debut of a significantly refreshed third-generation 6-Series in three body styles: coupe, convertible and 4-door Gran Coupe.

Going on sale in the second quarter, the ’16 6-Series comes with redesigned front and rear aprons, grille and LED headlamps, as well as suspension, steering and aerodynamic tweaks.

All three body styles also will be offered in the high-output ’16 M6, which comes with a 560-hp 4.4L turbocharged V-8 capable of a 60-mph run in about 4 seconds, although the convertible is a bit slower. M6 transmission options are a 3-pedal 6-speed manual or 7-speed dual-clutch.

Worldwide 6-Series sales have approached 80,000 units over the past three years; 4-door Gran Coupe models make up about half of the mix.

BMW reports 2014 was the group’s most successful year, marking the first time with worldwide sales exceeding 2 million units. BMW was the No.1 premium brand in the U.S., selling nearly 340,000 vehicles, a new record.

“It was our fourth consecutive year of record sales, and once again we continued to lead the global premium segment,” says Ian Robertson, BMW board member responsible for sales and marketing. He expects the momentum to carry into the new year.

“We will aim for a balanced distribution of sales between Europe, Asia and the Americas,” he says. “This year alone, the BMW Group will launch around 15 new models and model revisions, including the X5 xDrive 40e, which shows the capabilities of plug-in hybrid-electric-vehicle technology.”

On the manufacturing front, the company’s plant in Spartanburg, SC, produced more than 350,000 CUVs in 2014, a new record.

The automaker is expanding output in Spartanburg to 450,000 vehicles by 2016, making it BMW’s largest plant worldwide. CUVs such as the X3, X4, X5 and X6 come from the plant.