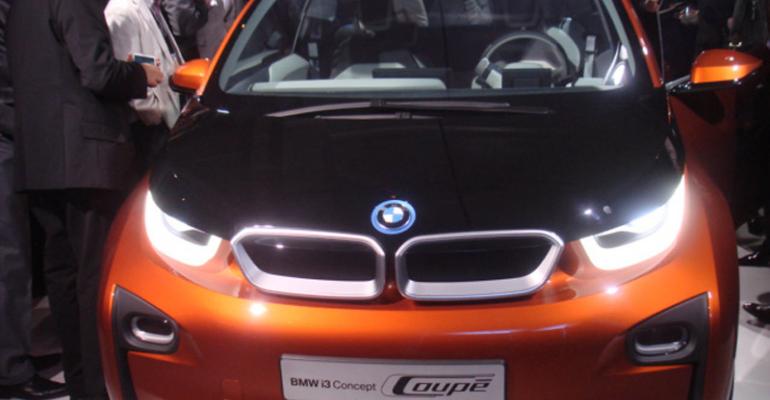 Both the i3 Concept Coupe and i8 Concept Roadster provide a good idea of what the production vehicles will look like, the auto maker&rsquo;s design chief says.

LOS ANGELES – BMW Group offers two glimpses of its future with a double reveal of its i8 Concept Roadster and i3 Concept Coupe at the auto show here.

The i8 Concept Roadster, also referred to as the i8 Spyder, is an open-top 2-seater with upward-swiveling, windowless doors. The car’s body is molded with BMW’s LifeDrive architecture, a carbon-fiber-reinforced plastic module that provides for lightweight passenger areas, while the driving module is made with primarily aluminum components.

The i8 Concept Roadster is a plug-in hybrid powered by BMW’s eDrive technology that combines a high-performance electric motor and an internal-combustion engine. The lithium-ion battery pack reportedly can power the Roadster up to 20 miles (32 km) on a single charge before the gasoline engine kicks in.

The battery can be recharged in about 1.3 hours, plugged in to a domestic power socket.

“This is a vehicle in which you can drive out of your garage in electric mode, no sound, no emissions,” says Adrian van Hooydonk, global head of design. “And then, out on the open road, you can press the accelerator and then access power and performance that is comparable to an M3.”

But, he adds, “When you get back home, you will realize that your fuel consumption is at the level of a small city vehicle.” Thei8 Roadster’s fuel economy is rated at about 78 mpg (3.0 L/100 km.

The tight, sloping rooftop “with a drag coefficient that’s going to set some records” reflects the great care taken by BMW designers to optimize the car’s aerodynamics, van Hooydonk says.

The auto maker’s i3 Concept Coupe also was officially revealed at the auto show, although its flashy preview the night before in Beverly Hills was widely reported.

Sporting the same type of carbon-fiber hull as the i8 Concept Roadster, the 4-seat Coupe offers a clear example of what BMW designers “think the future of the city vehicle, or megacity vehicle, if you will, should look like,” van Hooydonk says.

The showcar Coupe’s bodywork panels around the wheel arches, doors and rear sidewalls are painted in a blazing Solar Orange metallic, contrasting with the high-gloss black finish on the hood, roof and trunk lid, in addition to the body’s black lower edge.

The car also includes an infotainment and navigation package linked to the Internet through BMW’s ConnectedDrive services.

Both the i3 Concept Coupe and i8 Concept Roadster give consumers “a very, very close look at what the production vehicle will look like next year,” van Hooydonk says. “These two vehicles represent our idea of tackling the challenges of the future, of basically developing a new kind of mobility.”