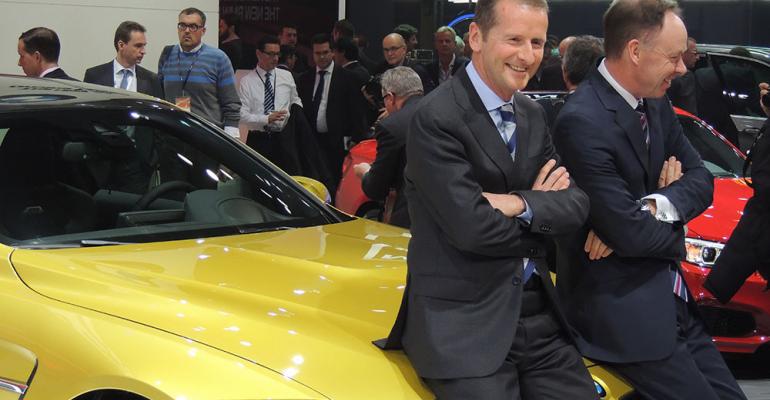 As European customers take ownership of the new i3 electric vehicle, Herbert Diess says establishing a public infrastructure &ldquo;is not really very important because most people are charging their cars at home.&rdquo;

DETROIT – The success of electric vehicles hinges not on the development of a public charging infrastructure but on the willingness of consumers to have charging ports installed at their homes, a BMW executive says.

As the German automaker launches its i3 4-passenger EV, slated to go on sale in the U.S. in May, BMW board member Herbert Diess says buyers of the car likely will drive it short distances in urban areas and will not need other sources of electricity away from home.

Based on usage of BMW’s early test EVs – a Mini and a 1-Series – Diess says “very few people would use public charging.”

Speaking with journalists during the recent North American International Auto Show, Diess says he has been driving an i3 for more than a year. “And not once have I touched public charging.”

He says parts of northern Europe rapidly are building an infrastructure for plug-ins. For instance, Amsterdam expects to have 2,000 public charging stations by the end of next year.

But as European customers take ownership of the i3, Diess says “this public infrastructure is not really very important because most people are charging their cars at home.”

Home charging is more convenient and eliminates anxiety about the availability of a public dock, an issue bound to crop up as EVs proliferate.

Plus, Diess says most EVs are used within cities for about one hour per day. “So there is plenty of time for recharging,” he says.

“We think long-term there will be many EVs around, mainly when it comes to commuting shorter distances in metropolitan areas.”

They make sense in Europe, where cities are crowded and parking spaces tight. Also, gasoline prices in Germany recently topped $12 a gallon. In Asia, EVs are a tool to curb pollution and improve air quality, Diess says. “We really believe in electric cars.”

The more zero-emission vehicles BMW sells, the more leeway the automaker has in marketing high-performance cars such as the all-new M3 sedan and M4 coupe, without facing government fines.

Diess refers to the 362-hp i8 2+2 plug-in hybrid with its carbon-fiber chassis and 94-mpg (2.5 L/100 km) fuel-economy rating, as crucial to the sustainability of dynamic driving in an era of increasingly stringent emissions standards. Priced at $135,000 in the U.S., the i8 goes on sale this spring.

“The i8 shows we can do brilliant cars if we put batteries into the cars – cars that probably provide even more fun-to-drive (character) than our conventional inline 6-cyl. engines,” he says.

As the i3 rolls out to customers in Europe, Diess says response from the market has been extremely upbeat.

“The customers are really enthusiastic,” he says. “They love the experience of driving electrically. The feedback is what they would have expected in an electric car from BMW: direct steering, fast, a narrow turning cycle. It’s the typical BMW concept: The front axle is for steering, and the rear axle is for acceleration. Electric motors should be at the rear axle because there’s so much torque available – the front wheels can’t handle it.”

Diess says he is surprised more buyers are not opting for the range extender, a 0.6L 34-hp 2-cyl. gasoline engine mounted in the rear that adds 330 lbs. (150 kg) to the curb weight. The range extender acts as a generator and never directly drives the wheels.

“I personally prefer the car without the range extender,” he says. “It depends how you use the car. If I used the car for daily business – going to work, week in, week out – I wouldn’t go for the range extender because it’s additional weight and the car loses a little bit of its agility, its nimbleness.”

Overall, he expects about a 50/50 split for i3 sales with and without the range extender.

Also on the product front, Diess confirms a convertible version of the 2-Series will come to the U.S., likely with a soft top, as production will launch “toward the end of the year.”

The ’14 2-Series coupe, introduced recently in Detroit as a replacement for the 1-Series coupe, goes on sale during the first quarter with a base price of $33,025.

Below the 3-Series, Diess says BMW does not see the need in the U.S. for a smaller sedan. Customers seeking four doors in that segment can consider the X1 small CUV and, if it comes to the U.S., the Active Tourer 2-Series multipurpose vehicle.

Although rivals Mercedes and Audi are in the small-sedan segment with the new CLA and A3, respectively, Diess says he sees a “high risk of substitution” as the vehicles may swipe sales from the brands’ larger cars.

He declines to confirm if the Toyota FT-1, displayed in Detroit, is an early version of a future sports-car architecture to be shared with BMW.

“We are working on that. We are making progress,” Diess says of the joint project with Toyota. “It’s a complex task. We need to decide which cars would they be and when they would launch. We think it makes sense for both companies, but it is a car architecture that has to suit both companies. I think we will have a final decision in a few months.”