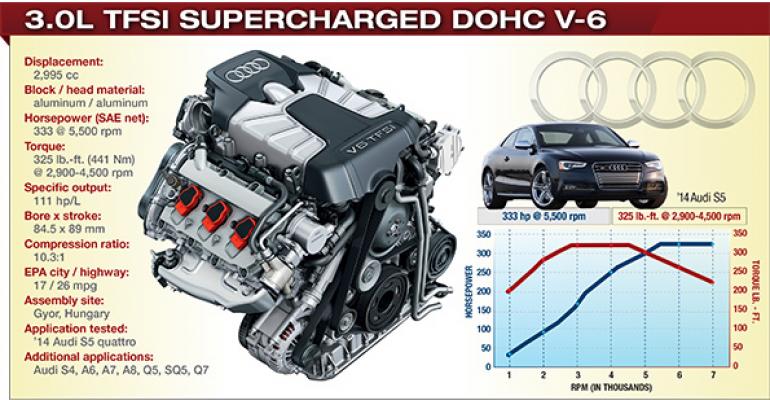 Surprisingly, it was planned as a small-volume engine for high-performance compact S4s and S5s. Now it is Audi&#39;s only V-6 available in midrange A6s and A7s, the flagship A8 sedan and Q5, SQ5 and Q7 CUVs.

Ward’s 10 Best Engines competition has recognized outstanding powertrains for 20 years. This installment of the 2014 Behind the 10 Best Engines series looks at the development of Audi’s TFSI Supercharged V-6.

It’s hard to believe this 3.0L boosted beauty – with no major changes or upgrades since its U.S. introduction in 2010 – snagged its fifth straight Ward's 10 Best Engines trophy for 2014. But those who know it as WardsAuto editors do understand it stays on their high-achievement list because it's so good that nothing else has supplanted it.

"No rivals have come along that can match the 3.0L's silkiness, its lively tip-in, its daily drivability, its gratifying torque at every engine speed," they say. "In other words, it's still a benchmark." Comments on their 2014 evaluation score sheets included: "One of the best high-performance V-6s ever," "the best engine I've ever encountered," and simply, "amazing!"

The old V-8 it replaced for 2010 was less quick (typically 5-plus sec. 0-60 mph) and a lot less fuel efficient, so this supercharged 6-banger was a win-win on both fronts.

"During casual cruising," Executive Editor Tom Murphy writes, "the engine is supremely quiet, able to lull a small child gently to sleep. But [it] begs curious drivers to downshift and crack open a wide-open run for glory. They are not disappointed.... Some people consider V-8s a guilty pleasure. Think of the 3.0L TFSI as all pleasure, without the guilt."

While a turbocharger uses hot exhaust gas to spin a turbine that pumps more air into an engine, allowing it to burn more fuel and boost performance, a supercharger uses an engine-driven compressor. Generally more compact and less complex than a turbocharger, it provides instantaneous response but has the efficiency disadvantage of spinning at all engine speeds.

Based on an older 3.2L naturally aspirated V-6, this engine was substantially re-engineered to handle much higher output while increasing its efficiency.  Enhancements include a pressure- and volumetric flow-controlled oil pump, a reduced-friction chain drive and lower-friction piston rings.

Beyond strong acceleration and refinement, its primary design objective was to be versatile enough for use in nearly any Audi model. After testing twin-turbocharger and supercharged versions, Audi engineers decided on the latter for its better launch performance and compactness. Working with supplier Eaton engineers, they wedged it neatly into the 90-degree V of the cylinder banks.

Beyond compactness, it also requires few changes for different applications. It can operate happily with both manual and automatic transmissions, as well as with Audi Quattro all-wheel drive, and handle high towing loads in the Q7. And it does all this while meeting both U.S. ULEV2 and European EU5 emissions standards.

Surprisingly, it was planned as a small-volume engine for high-performance compact S4s and S5s. Now it is Audi's only V-6 available in midrange A6s and A7s, the flagship A8 sedan and Q5, SQ5 and Q7 CUVs. It’s also used throughout the Volkswagen empire for hybrid versions of VW's Touareg and Porsche's Cayenne and Panamera.

"It's a pretty hefty mix in all of these carlines," says Audi of America product manager Mark Fruechtnicht. "So it's a very important engine. It's very versatile and tunable to suit whatever vehicle it's in. It can represent a performance engine in an S4, S5 or SQ5, or a very nice, refined entry engine in an A8 or a Q model. It starts at 272 hp in the Q7 and goes all the way up to 354 hp in the SQ5."

The compressor is an Eaton R1320 unit (it moves 1,320 cc of air per revolution) with two water-to-air intercoolers integrated into its housing and two 4-vane rotary pistons that counter-rotate at up to 23,000 rpm to deliver up to 2,205 lbs. (1,000 kg) of air per hour to the combustion chambers at pressures up to 11.6 psi (0.8 bar). The direct injection is common-rail with 6-hole injectors capable of three sprays per combustion event at pressures up to 2,175 psi (150 bar). Efficiency-enhancing features include a pressure- and volumetric flow-controlled oil pump, a reduced-friction chain drive and lower piston-ring pretension friction.

Because the supercharger is this engine's most defining element – competitive boosted V-6s typically use either twin turbos (Cadillac) or a twin-scroll single turbo (BMW) – we asked Eaton's Audi program manager Mike Guzak for his perspective.

"They were looking to engine downsize like everyone is," he says. "So what could they do to exceed the performance and efficiency levels of their previous V-8 with a smaller V-6 without losing horsepower or torque, and improving 0-to-60 performance? They had a few options – single turbo, twin turbo or supercharger – so they were assessed, and this came out on top."

Guzak says his team's biggest challenge was packaging. "To fit this large a supercharger in there, with intercoolers, stay inside the intake manifold envelope and still have high levels of performance and efficiency. Hood height is critical because of pedestrian impact zones, so we had to have a certain distance between the top of our unit and the hood," he says.

They overcame that challenge while actually exceeding Audi's performance goals through “a lot of excellent work together with Audi, including CFD (Computational Fluid Dynamics), design packaging exercises and layouts,” Guzak says.

The key is Eaton's patented Twin Vortices Series technology, a redesign of the traditional roots-style supercharger, which uses two counter-rotating lobed rotors that trap and push air as they rotate. For this Audi application, they replaced an earlier 3-lobe design with a more efficient 4-lobe blower that traps and pushes even more air.

The latest improvements, newly launched in an upgraded version of the 3.0L V-6 in the A8 sedan, adds larger intercoolers for improved heat transfer and an industry-first integrated clutch that decouples when it's not needed. "Our typical supercharger has a bypass loop that recirculates air from the outlet back to the inlet to minimize losses by not building boost at idle," Guzak says.

"But there is still some loss that you can manage with a clutch, and our calibration people have done an excellent job of optimizing when they want it out and when they want it to come in. That was the next level."