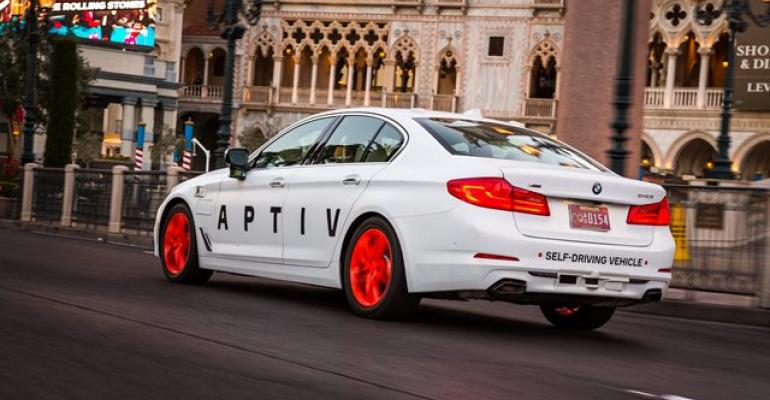 <p><strong>Aptiv shifts focus to technology deployment rather than demonstration.</strong></p>
Vehicles

The supplier officially launched Dec. 5 with Kevin Clark, president and CEO of Aptiv, saying the company has an opportunity to play a large role in an industry&rsquo;s transformation underpinned by the promise of autonomous vehicles.

TROY, MI – The future of mobility will be data driven, says Glen De Vos, chief technical officer of Aptiv, and the former Delphi electronics unit wants to be the engine behind the transformation.

“It is a big change for us,” De Vos says of Aptiv’s new role in the industry as chiefly a software company after decades of supplying automakers with components and parts hardware now considered low-margin commodities.

De Vos would be happy to keep selling the hardware, too, and the Gillingham, U.K.-based company likely will for many years to come, but it will take a back seat to the software its customers need to raise the connectivity, improve the safety and reduce the unfavorable environmental impact of the vehicles they make.

The supplier officially launched Dec. 5 with Kevin Clark, president and CEO of Aptiv, saying the company has an opportunity to play a large role in an industry transformation underpinned by the promise of autonomous vehicles.

“Aptiv is built on a strong foundation of industry firsts and has the knowledge, capability and agility to win with traditional OEM customers and emerging mobility players,” Clark says of the former Delphi Automotive. “It is a remarkable time to be in our industry, and we are very confident about our future.”

The powertrain unit of Delphi becomes Delphi Technologies. The two entities continue to share space on the Delphi R&D campus here, where signage gleams with fresh black paint of Aptiv’s brand. Aptiv, a name the company says suggests its adaptiveness and drive, also has a major presence in Europe and Asia.

Aptiv genuinely does operate from a place of strength in the industry with a projected $1 billion worth of software value by 2020, 40 billion lines of code shipped daily and 60% of its electronics and safety engineers focused exclusively on software. The unit generates $12.5 billion in annual revenue.

But De Vos says Aptiv sets itself apart in the industry with a track record for integration, where the supplier adopts its technologies to fit a customer’s specific application.

“Software by itself isn’t enough,” De Vos tells journalists during a briefing here. “You have to do the integration.”

One key element of Aptiv’s services will be helping OEMs shift from traditional architectures with up to 100 electronic control units dedicated to individual or small groups of vehicle functions to three or fewer computing clusters. The shift must occur, De Vos says, because of the expanded computing demands of future vehicles, where data transfer speeds must be six times what they are today.

EV-maker Tesla is the sole automaker employing such a computing architecture, although the next-generation Audi A8 with Aptiv-sourced SAE Level 3 automation technology takes a leap in that direction.

“Tesla has done a great service to the industry, showing how it can be done,” De Vos says.

Aptiv’s first year of operation will focus on the deployment of its technologies, such as automated driving, and kicks off with a big splash at next month’s Consumer Electronics Show in Las Vegas. The supplier will operate a fleet of BMW 5-Series sedans with automated technology as part of its news-making at the event. De Vos says Aptiv will have 150 AVs deployed by the end of 2018, even though it never will sell a single unit.

“You need to deploy the vehicle to know what it takes,” De Vos says.

While under the Delphi name, the supplier demonstrated its AV technology with a handful of Audi S Q5 SUVs, including a road trip across the U.S. under full automation.

Aptiv’s AV deployment also includes an ongoing test of the technology with the Republic of Singapore, where the supplier is helping alleviate transportation over-saturation on the island nation with self-driving cars and a reworked mobility infrastructure. Smart cities are another element of Aptiv’s business.

However, the big prize of future mobility for a company such as Aptiv will be monetizing the enormous amount of data its software will create. Although automakers historically control the data its vehicles churn out, Aptiv could negotiate for a bigger piece. The richer business segment likely will be commercial, De Vos says, where Aptiv software and technologies could run a company or municipal fleet and the supplier would own all of the data produced.

It could potentially then choose to sell the data outright, or use it as added value to another product or service.

“We have to make sure we take advantage of opportunities that fall outside the traditional (automotive) boundaries,” De Vos says. “We have to be part of that broader ecosystem.”