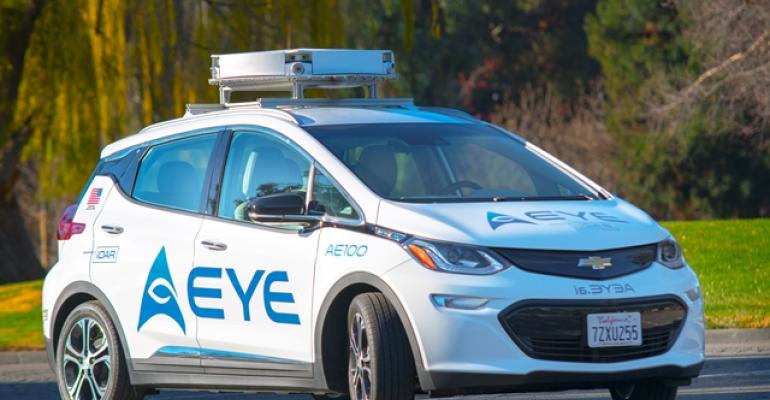 AEye founder and CEO Luis Dussan tells WardsAuto his company’s iDAR technology mimics how a human’s visual cortex focuses on and evaluates potential driving hazards. It is a step beyond today’s lidar systems, he says.

“It is Intelligent Detection and Ranging that initially combines agile MOEMS LiDAR, pre-fused with a low-light camera and embedded artificial intelligence to create software-definable and extensible hardware that can dynamically adapt to real-time demands,” Dussan says.

Dussan, who previously has led engineering programs for defense specialists Northrop Grumman and Lockheed Martin, as well as NASA’s Jet Propulsion Laboratory, says iDAR is agile in the way it focuses on and evaluates potential driving hazards. Instead of giving equal weight to everything in a scene, iDAR optimizes its data collection, enabling it to transfer less data of higher quality and relevance.

The AEye system also is software-definable, which means it can adapt to environments as they change, such as city driving versus highway driving.

Dussan says iDAR sensors address many of the fundamental limitations of first-generation spinning or raster-scanning lidar technologies, as well as the way they interact with other sensors.

“Existing lidar solutions don’t take into account how a scene evolves or what the mission is,” he says. “They just collect as much data as possible without discretion. Eventually 75%-95% of the data collected is discarded because it’s redundant or useless. This creates a huge strain on bandwidth, causing latency.”

In short, iDAR-powered sensors are more advanced, intelligent, and reliable than older sensors, yet less costly, he adds. And it is the first time in history the mass market will have access to powerful sensing capabilities rivaling aerospace and defense capabilities, Dussan says.

According to Dussan, first-generation lidar systems use rigid asymmetrical data collection that either oversamples or undersamples information. That dynamic creates a tradeoff between density and latency in legacy sensors, which restricts or eliminates the ability to do intelligent sensing.

The AE100 will be available this summer to OEMs and Tier 1 suppliers launching automated-vehicle initiatives.

“In conjunction with our OEM and Tier 1 partners, we have developed a product that addresses the complex system requirements, high standards and performance demands of our customers,” says Barry Behnken, vice president-Engineering at AEye.

“A key objective was to design a solid-state modular platform that is software definable to increase reliability and optimize the cost,” he says in a statement. “We created an easy transition from first-generation spinning lidar hardware that allows path-planning software teams to plug and play the AE100 as they replace their legacy systems. It requires no software changes and enables them to bring in the more advanced features over time.”

AEye’s iDAR Development Partner Program is available to partners interested in integrating iDAR into their products.

“Our goal is to get our customers through this minefield of design choices, but it’s tough because there is a lot of noise and overhyped approaches out there and many potential customers don’t have in-house expertise to wade through the muck,” Dussan says, noting AEye has developed relationships with the largest automotive and heavy industry OEMs and received approximately $20 million in funding.

“We also are working with other best-of-breed sensor companies that believe in and fit into the iDAR framework,” he says.