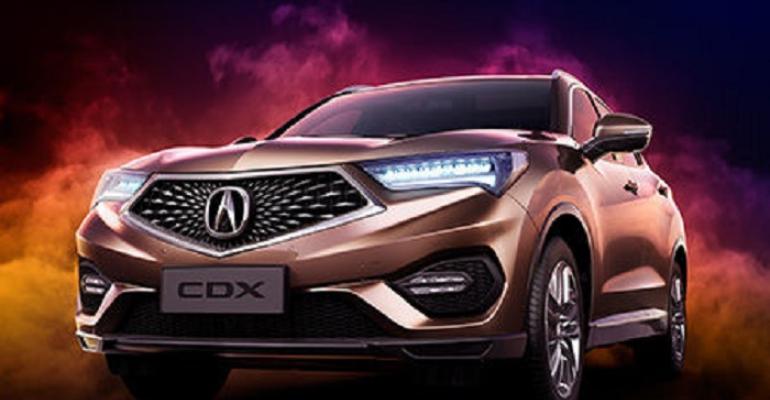 There are only four models in WardsAuto&rsquo;s U.S. Small Luxury CUV segment, from Audi, BMW, Chevrolet, Infiniti and Mercedes, but growth is projected.

LOUISVILLE, KY – With America’s appetite for CUVs seemingly insatiable, Acura is looking at selling its Chinese-market subcompact CDX model in the U.S.

The CDX, which went on sale last year in the Asian country, uses the same B-car platform as sister-brand Honda’s HR-V CUV and slots below Acura’s compact RDX CUV in size. The CDX uses the Honda Civic’s 1.5L turbocharged 4-cyl. and an 8-speed DCT as its powertrain.

“It’s a model that interests a lot of our people, so we have our R&D guys looking into the possibility,” Jon Ikeda, group vice president-Acura U.S., tells WardsAuto here during an ’18 TLX media event.

Ikeda says bringing the CDX to the U.S. “is not as simple as just shipping it over here” due to different regulatory requirements for new vehicles in the U.S. and China. But “it’s on the table…it’s in discussion.”

But the sector is expected to grow, with Lexus’ UX concept confirmed for production per an Australian news report last month.

Since the discontinuation of the ZDX coupe-like CUV in ’13, Acura has had just two CUV models in the U.S., the RDX and larger MDX, so Ikeda says the brand is exploring derivatives of existing models to grow its presence in the sector. A large CUV with a more spacious third row than that of the MDX is an example of one possible model, but he says the brand needs to be mindful of its performance and luxury direction.

“There are many, many things we could do with derivatives of our vehicles. I’m never going to say never…(but) we have to be smart with how we approach it.”

A redesigned RDX is due next year, while Acura last year freshened the MDX.

However, sales of the large CUV, traditionally Acura’s best-selling model in the U.S., fell 8.4% in the first quarter. Ikeda flatly states strong competition is to blame for the drop.

“It’s one of those segments where everybody just keeps coming in and I think the pie just gets cut into more and more smaller pieces,” he says. “It’s a very hyper-competitive area. So we have to keep aggressive.”

He says the new styling direction for the MDX, which saw the CUV get an updated face in the form of Acura’s diamond pentagon grille, as well as upgrades in interior design and materials, “has resonated well. We’re staying focused on making sure that (model) stays our top (seller).”

Acura is launching a hybrid version of the MDX this month and in June will debut a freshened TLX midsize sedan with upgraded styling and a reworked infotainment system, the latter seen by industry-watchers as traditionally a weak point for the Japanese brand.

That new product, as well as a flashy advertising campaign for the TLX that links it with Acura’s NSX supercar, is being counted on to lift the brand’s sales into the black for 2017.

The Acura executive says the brand is “not going to take our eyes” off its ILX compact or RLX large sedans, but doesn’t offer specific plans to motivate sales of either model.

“The first two months of the year is always a little bit harder to gauge because it is seasonal,” Ikeda says. “With that said, we know we have some challenges that we have to overcome.”

He wants to continue to avoid heavy incentives to move inventory. Honda traditionally has taken a disciplined approach to spiffs to protect vehicle residual values.

“Yeah, you could throw money at (faltering models), but we’re giving you a compelling story, especially with the new TLX. There’s a lot there.”