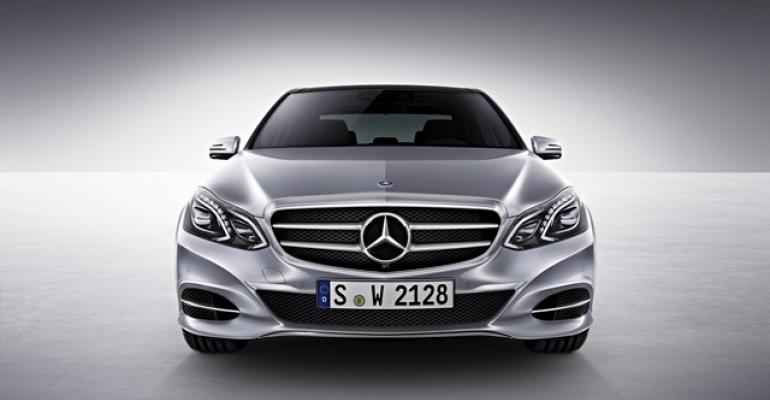 TROY, MI – Active grilles that open to let in air to cool the engine when needed and close at cruising speeds to reduce aerodynamic drag are in high demand and growing in sophistication, says mega-supplier Magna International.

Since launching its active grille in 2012, Magna has shipped “millions of them (annually) and (demand) is growing and growing,” Anthony Povinelli, global product line director-Active Aerodynamics, tells WardsAuto.

The next advancement – what Magna calls a visible active grille – already can be seen on the Mercedes E-Class, and more automakers are moving in that direction, Povinelli says.

Most automakers currently use 2-piece active grilles, with a cosmetic panel that serves as the face of the vehicle, backed by a separate louvered component that opens and closes. The new-generation visible active grille employed on the Mercedes sedan is a 1-piece unit in which the cosmetic component with the high-quality finish also is the part that opens and closes.

The advantage is twofold. Making the visible grille the active part simply looks better, and it cuts weight, improves packaging and simplifies manufacturing. It also further improves aerodynamics, because the part that closes is at the leading edge of the car, not tucked inside the engine bay inches behind the static grille, optimizing airflow.

Of course, the visible active grille is a more costly component, and some automakers instead are expected to consider an interim step in which there still are two pieces but packaged together more closely.

Aerodynamic benefits vary depending on vehicle design and engine efficiencies, Magna says, but it estimates the new visible active grille offers a 15% improvement over the 2-piece version. The intermediate product would improve the drag coefficient almost as much at about 10%-15% over conventional systems. Magna says it does not have production applications for the mid-level active-grille system as yet.

But automakers appear ready to move even beyond the grille, Povinelli says, with mechanical underbody parts, rear spoilers and diffusers.

Employing an active front air dam, for example, would give designers additional styling freedom and improve a vehicle’s drag coefficient, because the air dam could deploy fully at higher speeds and then safely tuck itself away at low speeds, such as when the vehicle is approaching a steep ramp or nuzzling up to a parking block.

“There’s (an aero) benefit if you can get (deflectors) into spots you normally wouldn’t be able to because of fear of damage,” Povinelli says.

There are no applications on the road to date for these other active aero systems, but Magna says it has production programs in the works, including one for an active front deflector that will launch in the next 18 months.

Suppliers competing with Magna in the sector and offering similar products include SRG Global, Rochling and Sonceboz.