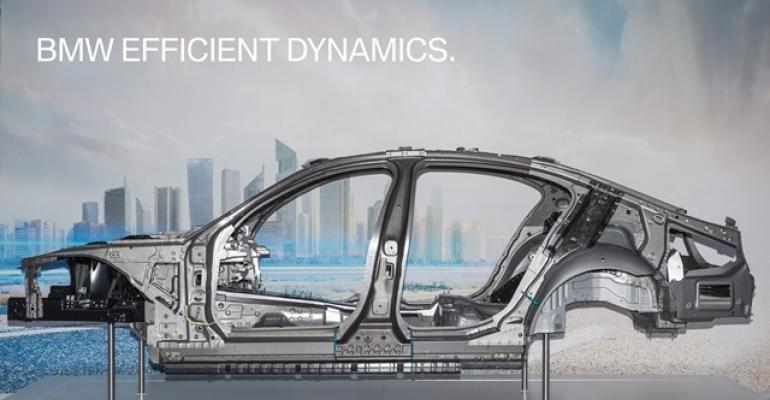 The new flagship is the emerging poster child for hybrid body construction, with a mix of aluminum, high-strength steel and carbon fiber, a blend that allowed BMW to cut weight of the structure some 88 lbs.

NEW YORK – Carbon fiber takes the next step at BMW, which is bringing the material closer to the mainstream with the new ’16 7-Series.

The German automaker broke new ground with its use of the material in its i3 and i8, which have passenger compartments – or as BMW puts it, life cells – consisting primarily of carbon-fiber reinforced plastic. In this case, the bodies are manufactured on dedicated, low-volume lines.

But the 7-Series represents a new benchmark, because BMW is able to produce the sedan’s mixed materials body-in-white on the same line as its other more conventional models at its Dingolfing, Germany, plant.

The new flagship is the emerging poster child for hybrid body construction, with a mix of aluminum, high-strength steel and carbon fiber, a blend that allowed BMW to cut weight of the structure some 88 lbs. (40 kg), while maintaining a low center of gravity and evenly split front-to-back weight balance for optimal handling.

Carbon fiber is used for the roof rails that stretch from the A-pillar to the rear of the car in what BMW says is the first core-free, closed structural element made of the material for high-volume vehicles. Carbon fiber also is used in the crash bar and center tunnel and is sandwiched with steel for the car’s B-pillars, cutting weight while improving roof-crush performance.

Aluminum is used for the front and rear sections of the body-in-white, with the rear die-cast with varied thickness to limit weight by putting material precisely where it is needed for stiffness. Shock towers are aluminum, as is the suspension.

Most of the rest of the body is hot-formed ultra-high-strength steel.

Doors are all aluminum for the first time on the 7-Series, except for the steel side-impact protection bar, allowing BMW to trim 13 lbs. (6 kg) from the ’15 model. The decklid switches to aluminum in the new model, as well, saving 11 lbs. (5 kg).

Lightweighting of the suspension, brakes and wheels has reduced unsprung mass as much as 15%, the automaker says.

Impressive is that BMW builds the structure on its normal body line at the Dingolfing plant, where 3-, 4-, 5- and 6-Series cars also are manufactured, in multiple body styles. The operation produces 1,600 vehicles daily, or about 100 units per hour.

Painting and drying methods have been modified for the 7-Series to accommodate the material mix, with the industry’s longest electrophoretically deposited paint drying line installed. It measures 787 ft. (240 m), about twice the length of conventional drying lines. It takes 14 hours to paint the new 7-Series.

Cycle times still lag when it comes to carbon fiber, “but we’re learning,” Ralph Gruenn, manager-Body in White Underbody, says here during a media drive of the new model. The carbon-fiber material comes from BMW’s Moses Lake, WA, operation in the U.S.

About half the aluminum used in cast components and about 20% of thermoplastics is recycled material, BMW says.

Because you can’t see the carbon fiber, the automaker adds a small Carbon Core badge affixed to the B-pillar that is visible once the doors are open, giving owners of the high-tech car one more thing to brag about.